Checking out the 2020 XBIZ Awards in Los Angeles

I remember going to LA several years back excited to check out a new show. We were on our way to check out a car show and we were excited. I was 19 at the time, and during that year we were working for this media company. Every once in a while we would get a gig in LA where we would be hired to take pictures at parties or clubs. It was fun, but, we never really got a chance to enjoy it. I was young so I didn’t get a chance to party as much as I would like to. It was tough seeing everyone throw back drinks and go buck wild and all we could do was watch. But, we did get a chance to see a lot of awesome things. In fact, during my time there I got a glimpse of the nightlife and shows that were going on around LA. If I had never gotten that job I would have never known that any of that stuff even existed. One day my buddy and I (who I worked with) were asked to check out this show in Downtown. We took it in stride (as we both hated making the drive from Orange County to LA), but knew that we were probably going to see something new. When we got there, we hadn’t even been in downtown for more than a few minutes when my friend and I got off of the freeway near the Convention Center. When we rounded corner off of Pico we were surprised to see a huge Erotica LA poster plastered on the front of the south hall. I was still a kid, but, I was intrigued by the possibility of sexy women and total debauchery. Well, that’s what I thought it was anyways. We had just been to Glamourcon recently and seeing and meeting a bunch of adult stars and glamour models was almost too much for my brain to handle. We couldn’t help but imagine what craziness they had inside the convention hall. While we would eventually check out that show (it was freaking awesome by the way), we were sad that it would eventually shut down. Yeah, it’s hard to believe, but, one of the biggest, sexiest and nastiest shows that LA had ever seen was gone and there was nothing to replace it. Well, that was until we heard of the AVN Show.

A couple of years ago I had a chance to check out the AVN Awards in Las Vegas. It was a show that I had never been to, but, had some idea of what to expect. Having been to a few model conventions over the years I was expecting this to be more or less the same. Maybe a little sexier of course. But, to my surprise that show was actually fairly tame. Maybe it’s the fact that the people in these new films are sexier than ever (hell, there are a few women that could pass for supermodels) that makes people calm down, but, the show was pretty reserved for what it was. Yeah, it was wild, but, it wasn’t as off-the-wall as I imagined it would be. But, I loved it. It was fun, and in this day and age I don’t expect to be wowed or even impressed (after growing up in the 80’s and 90’s, where excess was king, it is really hard to be impressed nowadays), I just want to have fun at an event and that is exactly what that show was. But, as awesome as it was I was a little sad that I didn’t get to see the real meat of the show. While much of the show is made up for fans to meet up with their favorite performers, the real heart of the show is the awards banquet that happens at the end. I, unfortunately had never been able to see it or any other one for that matter. But, that would change soon enough. There would come a day that not only would I be able to check out an adult awards show, but, would be impressed by what it was. While it may not have been a chance to see the AVN Award Show, it was something just as good, if not better. It was the XBIZ Awards.

Every year the Adult Industry brings out best of the best to a special show in LA. While on any given night this may not seem extra special (considering that most adult studios and celebrities orbit around the LA area), this show isn’t just to highlight one or two people, but rather to highlight all of the people and companies that offer the best in sex. Yes folks, this show is here to put a spotlight on the sexier side of life and to do it in a way that is truly Hollywood. In other words, it is meant to sprinkle a little glitz and glamour on the (already) glamorous sex industry. The XBIZ Show awards those that have put in as much as they have put out and are handed these awards by their own peers. This show, in a sense, is a lot like the Golden Globe Awards, where the people handing out the awards are the fellow peers from the same industry, but a hell of a lot sexier. You could definitely tell that this was the case too. Normally we are relegated to seeing what happens on the red carpet. But, this time around that wouldn’t be the case. I was lucky enough to get to sit in on this show and there really wasn’t any part where the crowd wasn’t hooting and hollering for the winners. It was actually really exciting and you can tell that these folks were really passionate for what they do. It is sex after all. I mean, who doesn’t have some passion for it? Also, it’s not every day that you can hear the names of some of the nominated films be called out in such a classy way. Instead of hearing movie titles like Gone With the Wind or Silence of the Lambs, or even The Shape of Water we are treated to titles that are a little more…what would you say…titillating.. Hearing movie titles like Teenage Lesbian, Angela Loves Anal 2 or Slut Puppies being called out is almost too funny not to laugh at. I can’t even keep a straight face as I type this. But, that is the business that it is. It may be a sensual business, but, it doesn’t always take itself too seriously.

Speaking of sex, this show had it in spades. So much so that it was busting at the seams. The performers that walked down the red carpet showed up in their best outfits and could not help but turn heads. I had never seen some of them before, and I must say they looked absolutely divine. I don’t know if it’s the fact that I’m getting older or if it’s the fact that there is something in the food these young actresses are eating, but, wow, everyone just looked so great! And if you don’t believe me, you just have to look at the pictures in this article. I may have taken the pictures, but, I take no credit for the sexiness that is luminating through your screen. Oooh wee! I’m just saying that everyone looked phenomenal. It didn’t matter if it was host Stormy Daniels (looking stunning in her silver sequin dress), Autumn Falls (in her beautiful black bandage dress) or even newcomer Mary Moody (who looked beautiful in her flowy dress), everyone was hitting all the style marks. Even Whitney Wright managed to impress with her over-the-top beaded dress. I wish I could describe this, but, I might be here for a while thinking of the words to do so. It’s one of those…hmmm… it’s better to see it than to even attempt to describe. The number of performers that showed up was very impressive as well. I didn’t know that there would be that many people, so obviously it was a real treat to get that many people into one place. I only wish that we had more time to converse with folks as they walked down the red carpet. Still though, it was a fine opportunity to meet some of the best in the biz.

This show was a lot of fun and I was happy that not only was I able to attend the show, but I am able to share some of the sights and memories of that year with you. This show was a lot of fun and also managed to show us more of the fun side of the performers. I know I couldn’t help but smile every time someone would yell out something totally out of right field. If only more of the mainstream shows could be this fun then maybe we would all watch them more often. 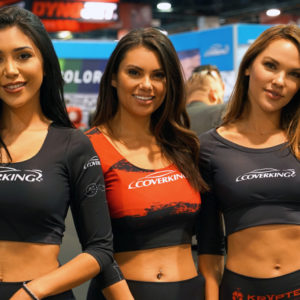