When this year started I was looking forward to big changes and new opportunities. 2019 had ended with a bit of a whimper and not the way that it normally did. The last few years running we were ending the year with our team attending the Winter Drive Show. It’s a show that we look forward to more than any other and since it takes place right before the holidays we’re all in a great mood. But, after years of good times and holiday cheers things had changed. The show went on but we weren’t there. It turned out that it was going to rain, and rain it did. The show was a disaster and it was a bullet that we dodged. So, while we weren’t able to get together like we normally do the hope of a better year was in the back of my mind. Things were going well in to the new year until things took a turn for the worse. Kobe Bryant’s passing was the first in a long line of events that would grip the planet. Who would have thought that nearly 6 months later the entire planet would be on lockdown and for the first time people every where would be quarantined? This is something that is unprecedented in history, and something we may see again. One thing that we have learned (and in a lot of ways are still learning) to do is to live at home a lot more. Staying inside a lot longer has taught me that if there is any one thing that shouldn’t be ignored during this time it has to be exercise.

Since the lockdown started in March I have been working from home and going out a lot less. When most places have been closed it has made it a lot more difficult to go out and live life like it used to be. Gyms, parks and many public locations for working out have been closed for nearly three months at this point. While there are some some places that have begun to open up, the way we interact with the world has changed drastically. I know in the time since this lockdown started I have been doing my best to work out at home a lot more. Not working out or staying healthy has shown to be detrimental to our health and well being, and subsequently, bad for our immune system. Staying active and fit will not only help us in fighting off potential diseases but make us look and feel good. So, while things have seemed like nothing but doom and gloom for the past few months something positive has actually come out of this.

Working out from home has its challenges, but also presents itself with a whole host of opportunities. I’ve seen folks getting creative with their workouts ranging from videos of people teleconferencing yoga sessions, people using their living rooms as an aerobics studio and everything in between. It’s been amazing to see such vigor and determination on behalf of everyone staying in the fight. But, if there is anything humans are good at, that is innovation. In the age of the coronavirus many people are staying home but are still actively trying to find ways to get the most of of their spaces. Recently I heard about a new product that was so different than anything I had seen before. This was Nucleus.

While working out at home is a great option for a lot of folks, it also represents a lot of challenges. One of those challenges is having the room to work out in. While I am lucky enough to have plenty of room to work out in I understand that not everyone has the same luxury. Whether one may live in a studio apartment or a mansion space is always at a premium. So, when I heard about Nucleus I was more than intrigued. Well, to be honest, I was intrigued from the moment that I saw it. So what is Nucleus anyways and why is it changing the way that I (and so many others) are view traditional workouts?

Nucleus Central Core is a workout device that was created by former soccer player, health coach and former model Diego Calvo. Diego had worked in a variety of industries over the years and learned that health and fitness were paramount to living. Having earned his degree in nutrition Diego did what anyone with a gift for teaching would do and would become a heath coach. He would go on to share much of what he had learned to his clients and would become well respected here in Los Angeles. But, having talked to Diego personally and having learned a bit about the man, I can tell you that Diego is a very driven individual. Not being content with just teaching clients individually about health and nutrition Diego would take his message further to come up with an idea for a new workout machine.

This machine (and it’s hard to even call it that when you see it) is unlike anything I’ve ever come across. It looks something like the steering wheel from the movie Demolition Man (you’ll know what I mean when you see it), but is not very heavy and has no moving parts. While it’s appearance is familiar it is hard to understand how it works… at least until you see it being used. You see, unlike most workout equipment that exists, this one does not require you to add more weight to it, software to buy or event pay more for any additions. The unique design is a one-size-fits-all type of design that works depending on you. The Nucleus is filled with liquid and becomes heavier the harder that you work out. So, no matter how tall, short, strong or week you may be, and no matter how much you think you can overpower the device, this thing will work out as hard as you allow it to. I remember when I first had heard this I couldn’t believe it. But, after seeing it in action it made a lot more sense.

I remember years ago that Steve Jobs gave a speech about efficiency of locomotion. He was referencing a study that looked at species and how efficient they were at moving from one place to another. Humans were not as efficient as other animals when it came to travel. This however changed completely when a human used a bicycle instead of his regular legs. The genius behind that was that man was able to create a tool to make himself more efficient and work less. To create a good tool one has to look at how and why this would be better than anything else around. It also has to solve a number of complex problems. The Nucleus Central Core is a device that tackles the size and weight problem head on and allows the user to workout more efficiently and have a smaller footprint while doing it. It’s pretty incredible actually, and when you see it in action it’s easy to see how this is a game changer. In this day and age where space and time at are a premium and users demand ease of use, Nucleus seems to be in the right place at the right time.

I had a chance to talk to Diego about his products and you could tell just how enthusiastic he was about all of it. Seeing people use it and be genuinely shocked at how efficient it was tells you a lot about how much people use it. It’s funny how far we have come since the days of the Shake Weight and Abs of Steel (remember that crazy thing?), but this is where we are. Technology has gotten a lot better, and thankfully, we have the engineers working with the people that use these items (in this case Diego) and give their input. Who else would know what athletes need better than athletes themselves? This is a question that has not always been answered in the landscape of exercise equipment, but in this case I am glad that it has. And even more importantly been answered. The right tool in the right place at the right time can make all the difference in the world, and in this case Nucleus has definitely arrived.

Check out this video of Nuceleus being used at the LA Fit Expo earlier this year. The reactions of the folks using this device tell you a lot about how it works and what to expect.


Words and by Daniel Navarrete

For more information on Nucleus and where to get one for yourself, please be sure to check out their Home Page

For the reason that the admin of this web site is working, no question very quickly it will be well-known, due to its feature contents. Gonzalo Casmore

You completed various fine points there. I did a search on the subject matter and found mainly persons will agree with your blog. Shad Rippel

Pretty! This was an extremely wonderful article. Thank you for providing this info. Bo Louder 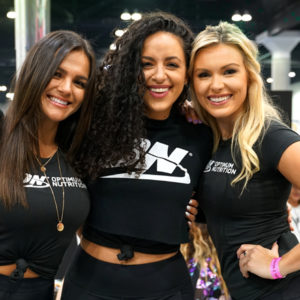 LA Fit Expo 2020 Hitting the Ground Running at LA's Biggest Fitness Show The end of 2019 signaled a change in the way I was living...