When I was a little kid I used to stay at my aunt’s house for the holidays. Back then I used to actually have vacation and I used to spend that time with family a lot more than nowadays. During that time I used to watch cable (which I didn’t have growing up) and hang around with my uncle. While that was all fun there was one thing that I enjoyed quite a bit, and that was watching my aunt cook. Ever since I can remember I used to enjoy going to my aunt’s house to eat anything and everything she made. It didn’t matter whether it was a chili dog (where she never used store bought chili and would make her own) or a tamales (for Christmas time) everything she made was fantastically delicious. As a kid I never really understood what it took to cook good things, but I knew that it was difficult. Seeing my aunt labor over things like the correct amounts of spices and cooking times is something that I am still fascinated to learn about. That would be the start of journey down the rabbit hole of food. There was so much to know and so much to learn. Until I had asked the question, I never knew just how much effort it took for things to happen. All of the strings that a person (or persons) had to pull in order for a dish come out or for a dinner to take place is one of the hardest things to do. I would find out though, that there was a person that did this in stride and made me rethink just what doing difficult things was.

A while back I had a chance to talk with Chef Wayne Elias. I was excited to learn about Chef Elias because I had heard about his resume and I was excited to learn about him. It was a fun conversation and I learned quite a bit the man and his company Crumble Catering. I could tell just by talking to him that not only is he a very talented chef, but he is the master of a domain that many of us would not dare to cross in to. Catering seems pretty simple on the surface (and I’ll admit, I used to think that it was), while food is definitely the end deliverable (when it comes to catering), it isn’t the entire story. And to be honest, food, while amazing in its own right, is really just a small part of the bigger story when it comes to catering. Talking to Chef Elias I really got an understanding of just how difficult it is to prepare and to run an event of the size that Crumble Catering handles.

At the time that we had spoken, the Oscars were coming up and Chef Wayne and his staff at Crumble (Catering) were going to be hosting an after party for legendary artist Elton John. Yes folks, this party wasn’t just your run of the mill party that he was hosting. Oh no, this was one of those big after parties that you see Entertainment Tonight or Access Hollywood go to. To give you a sense of scale, the last event that Chef Elias had been a part of was a Grammy party. That party alone hosted over 550 people and the meal was a 4-course dinner! Holy moly, can you believe that? I had to think about that after he told me. While I don’t know how long the party itself was, I do know that it was timed just like every other event. I’m a project manager in telecom (at my regular job) and I like to break down complex problems in to smaller, easier ones. While I may not know all of the answers to what it takes to cater an event like this, I really wanted to break this fact down.

550 people all eating 4-courses is a huge number that is hard for me to fathom. That means that all of those people not only had one course to eat that night, but three more additional courses. That equates to over 2200 courses, all individually cooked! And that is just the food for the guests, not counting any additional food they may need. What’s even crazier about that is that each of these courses has to be cooked according to a timeline where the kitchen can pump out dishes that are ready one after another and then roll right in to the next dish. This was mind-boggling to me. Not only were the dishes having to be prepared, cooked and served consistently, but the staff had to be able to accommodate any issues that would arise throughout the day. To me this wasn’t like anything I had ever thought of and it was much more than just preparing food for party-goers. In fact, what Chef Elias was doing when he spearheaded projects like this was more like conducting an orchestra, while a play did its thing on-stage all the while having to cater food to the staff on-site. It’s either like that or like someone juggling a pair of chainsaws while balancing on a unicycle and having to recite The Rhyme of The Ancient Mariner. What I’m trying to say is that it is difficult. And you know what’s even more crazy? The fact that the (then) upcoming Oscar Party that Chef Elias was going to be heading was going to be even bigger. Yeah, those 550 people were nothing compared to what was coming. This party would cater to over 1000 people and feature a 5-course dinner! Just writing that makes me want to lie down from exhaustion.

That Oscar Party for Elton John (and the Elton John Aids Foundation) was another in a long line of incredible accomplishments that Chef Elias is willing to undertake. I had to ask him though, just how any of this is possible? Being able to handle such a complex machine is nothing short of extraordinary, but, for someone who has gone through the trials and tribulations that come with the industry, this just comes naturally. When you have had the experience that Chef Elias has had in all facets of the restaurant industry, this never becomes easier, but, it helps one to handle those circumstances with a calmness that would otherwise be non-existent. Getting to the point where you can manage a catering business is something that I have to admire. Not only are you having to manage things across a spectrum of subjects, but you have to do it on someone else’s turf. This is incredible, and even more so when understand that the catering side is just one part of what Chef Elias is handling. On top of creating delicious recipes (all of which are seasonal and unique to the event that he is hosting), but, he has to manage a restaurant as well. That restaurant is called Rockwell Table and Stage and it’s an incredible beautiful location that serves amazing dishes. If you didn’t need any more proof that Chef Elias is the hardest working man in showbiz, then I don’t know what to tell you.

I still think back to when I used to watch my aunt cook and think about what the food was going to taste like. It wasn’t until I began to cook on my own that I imagined just how many things she was really having to take care of at the same time. If it wasn’t the multiple pots of boiling water and sauces then it was all the other people flying in and around the kitchen. It was a carefully choreographed ballet of moving pieces that had to be managed. It was incredible what she could do then and what people like Chef Elias can do. It takes a special person to take on the reigns of such daunting tasks like catering events of over 1000 people. It takes someone that can look beyond what their own limitations may be and push past them because the know what they can be capable of. Chef Elias showed me that, while I had only seen the surface of what is going on, the chaos swirling around any event is unseen by most of the people there. And that, is just how Chef Elias would like it. You may not know how the machine works, but just the fact that it works at all is a testament to the man behind it. Definitely do yourselves a favor and check out Chef Elias’s restaurant (Rockwell Table & Stage) in Los Angeles and stay tuned for more in the future.

Photos by their respective owners 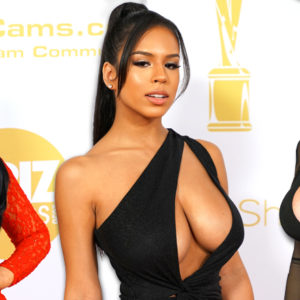 Checking out the 2020 XBIZ Awards in Los Angeles More than 15 Years of Sex and Glamour Awards I remember going...