The last few years have been pretty crazy. With a change in the way we live our lives and the way the world world works has been put on its head, it has been…interesting to say the least. I don’t know about all of you, but, since the moment that the world went on lockdown I have been praying and hoping for a return to the way things were. Now, while I have been wanting things to go back to normal I understand that a lot of people have been wanting a change to the way that we do things. Frankly, after having lost touch with a friends, family and a lot of people I knew, I was longing for the days when we could socialize and yak it up like we used to. Considering that I covered a lot of events, and would always be someplace new, I was really excited to see that the word Covid was slowly being phased out. At the time that I write this it seems almost as a suggestion at this point. But, what does that mean? For me, it means that we can finally get together and go to events like we used to. And one show made its return completely out of left field, and that one just happened to be one of my favorites: The Fit Expo!

Once springtime hit, it looked like a lot of the covid restrictions that had been hampering events were (finally) being lifted. And it was almost at the snap of a finger that shows started appearing. The Fit Expo was one of those shows. The LA show (which is my personal favorite) didn’t happen for the past few years, and I was looking forward to the show coming back in January of 2023. But, out of the blue (at least to me), the show was scheduled to happen at the end of May. Man, oh man, when I found that out, I couldn’t have been more excited. I found out the week of, so, any other stuff that I had planned I put on hold for later. There was no way I was missing this one.

That weekend of the show I was more than eager to make it out. I had not been to the LA Convention Center (let along LA) since the beginning of 2020 and back then it was to go to the last Fit Expo in LA. And if any of you remember, I wrote about my time at the show. I’ll never forget it. It was a day that I couldn’t forget even if I tried. On my way to the show that day I heard the news on the radio about Kobe Bryant’s passing. The whole day was exciting but very somber, and to see the massive crowds show up to the make-shift memorial for Kobe was incredible. It was unlike anything I had ever seen, and more than two years later I made my return back to the show that I had last been to. Would the show live up to the high expectations as the last one? In a nutshell, yeah.

You know, even though the attendance and the atmosphere was not as crazy as it was the last time I was there, it was really nice to be getting back to business. There were a lot of vendors and fitness icons in attendance, and everywhere I looked it was just like stepping back in time to the world that we all once knew. The only thing that was more fun than being at the show was talking to the people that were there. Everyone seemed just as excited as I was to be there, and that added to the atmosphere. And for someone that is definitely guilty of packing on those covid pounds, it was nice to get inspired to hit the gym harder.

Yeah, it was really fun to be able to go back to one of our favorite shows once again. It has been way too long since the last one, and kicking things off with the LA show was a real treat. I would be even more excited, but at the time of this writing the shows that were scheduled for the rest of the year (including the Anaheim show that was going to follow up the LA one) were canceled. Yet again, the covid monster strikes again, and yet again an entire set of shows have been canceled. I don’t know how things are going to play out here in California, but, if we keep following this trend it is hard to know whether or not we’ll have a full slate of events next year. But, like always, we’ll see.

In the meantime let’s enjoy this last event and all of the wonderful people that we had the pleasure of meeting. And thanks again to all of the sponsors and vendors that made it out. It was great meeting everyone and getting to talk fitness, family and friends. Good times indeed! 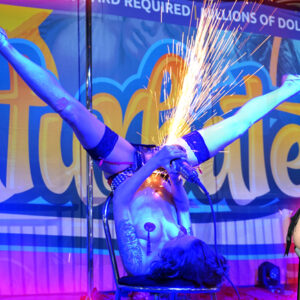