Every year there is a host of events that I look forward to. When it’s not the holidays it’s the shows that take place that I enjoy the most. Meeting up with new people and see new things is all part of the experience. I had long wondered what supercross would be like following what would seem like the longest pandemic ever. And it had been more than two years since the last show, so I was curious as to how it was going to be. Well, normally this show is in January, but things are different now. The world has changed, and now that it looks like things are pretty much opened up, it looks like every organizer under the sun has decided to push up the schedule for all of these shows. So, much to my surprise Supercross came very early this year. Well, earlier than having to wait until January. And might I add, it was still just as much fun as I thought it would be.

With the world opening up event promoters have taken it upon themselves to pack in as many shows this year as they can. If you are as hungry as myself to check out shows then this is a dream come true. Especially after the last few years where shows have been canceled, postponed or even put in limbo this was great to hear. The only bad thing is that since so many events are being pushed into the year it is hard to know when shows are going on. Supercross normally kicks off the season in Anaheim in January, but completely out of the blue the show was scheduled for February. Not that big of a change for sure, but I had thought the show has been canceled. Either way, it was great news and just like it had been in the past this show hit the ground running.

While the races are always a great time (and one I recommend that everyone check out) I’ve always enjoyed checking out Fan Fest. I don’t remember for sure, but I think this part of the show was just called the pit(s) at one point in time. This is where motorcycle, part vendors and food trucks sell their products and you get to see the riders working on and preparing their bikes. It’s a very up-close and personal way for fans to check out their favorite parts of the show. Plus, unlike the race itself you get to experience everything and then some. I love seeing the racers come and go from the track and that unique smell of gas in the air is pretty awesome. If you ever get a change to go check out this show I totally recommend you make your way over to Fan Fest first.

All in all it was real treat to check out Supercross. I hadn’t been to one of these shows in a few years and after going to this one it felt like nothing had skipped a beat. Everything was just awesome as I remember. Well, mostly everything. There was one thing that was different. That was the rave that happened at the end of Fan Fest. Monster Energy always has a big presence at the show and towards the end of Fan Fest they would host a big party for everyone. At their booth (which you can’t miss) all of the Monster Energy models would line up and shoot confetti and throw prizes out into the audience. At the same time they would introduce a bunch of the riders and let them talk to the crowd. Hell, a few of the fans were lucky enough to make their way to the front and get their autographs. That was actually one of the coolest changes from the last time. Check out some pictures of that in the bunch down below.

Even though I didn’t get a chance to check out the San Diego show I wasn’t too broken up about it. It turns out that unlike the Anaheim show the San Diego event doesn’t have it’s own Fan Fest. Weird I know, but that show is a stand alone one. Good stuff if you are a fan of the racing but a bit of a bummer if you enjoy the pits as much as I do. I hope that this year and next I can check out the show in a few of the other cities that they host at. Here is to hoping. In the meantime enjoy some of the pictures that I took at one of the days of the show. Good times! 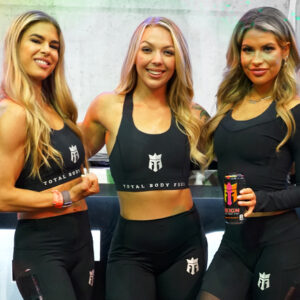 LA Fit Expo 2022 The last few years have been pretty crazy. With a change in the way we live our lives and the way the world...