Meeting the Brightest Minds in Science Fiction: Coverage from the L.Ron Hubbard Writer’s and Illustrator’s of the Future Show

As far back as I can remember I’ve been a big fan of science fiction. I can’t remember the time when it happened, but, growing up in the 80’s and 90’s, some of the best science fiction stories ever told had come out. I mean, holy cow, the amount of content that came out at the time was so incredible that those stories and the stories related to them are still making waves. If you don’t believe me, picture the names of some of these stories, and just think of when they started and what they became.  You have stories such as The Terminator, Aliens, Predator, Back to the Future, Tron, Robocop, Blade Runner, Dune, Mad Max, Akira, Jurrasic Park, Independence Day, Total Recall, Star Wars and Bill & Ted’s Excellent Adventure. That’s quite a list isn’t it? It’s even more impressive when you sit back to think that all of those movies have gotten remakes or sequels in the last few years (and before you even ask, yes, as of the writing of this article, Bill & Ted is going to get a sequel in the next year or so. The world is indeed a beautiful place to live in right now). But, as amazing as all of those movies are (as are all of the shoot-off television shows, video games, merchandise and everything related to them), it’s even more amazing to note that they all started as words on a page or as an illustration. It was an idea that someone somewhere wrote down in their notebook, or drew on the back of a napkin that would go on to spawn all of the amazing franchises you see and hear of today. I don’t think a lot of us give enough credit to the people behind those amazing stories and the worlds that they created. You may know all about Star Wars and George Lucas, but, who knows that the Predator was written by brothers Jim and John Thomas? I didn’t know, and I am sure that there are many writers and artists who have sadly been lost to history. But, there is a place where that does not happen. This place is a place where writer’s and illustrator’s are celebrated and acknowledged for their contributions to sci-fi and for being some of the best of their kind. It’s a place that we’ve been to before, and thankfully, we were fortunate enough to go back to once again.

Last year we were invited to a show that we knew very little about. As big as a sci-fi fan that I am, I never knew that a show existed where awards were given out to the actual creators of stories and art. So, when we got a little tip that this show was going down, we jumped at the chance. I didn’t know what to expect, and so, just like most things in life, I went in with an open mind. While I expected there to be a red carpet, I didn’t expect to see a giant dragon’s head or knights in suits of armor. Yes, that really did happen, and it was all the more glorious for it. But, while that was amazing, and amazing it truly was (read about last year’s adventure here), I did not expect to be able to watch the awards show from the inside. Checking out the show in its entirety was a real treat, and unlike most awards shows that I have seen in the past, this one allowed us to learn more about the artists and their craft. It was a nice peek into the window that is their mind. Knowing that they were able to create the works that they have, and repeat it once again is a feat that not many can do. As a fan of the arts, I’ve always been drawn to artists and to the worlds that they create. Seeing the genuineness of the people here (many of whom have come from around the world), is awesome. Last year offered up an experience that I had not expected, and that is why I was so excited for the show this time around.

This year the show was in a new location. The location was the MacArthur and oddly enough, was pretty familiar to us (as, just a few months earlier we had our booth at Hot Import Nights LA, and that literally took place across the street from this building entrance). That familiarity made it easy to find. The funny thing was that, having been to MacArthur Park before, and having seen the neighborhood, I would have never known that the building where this show took place even existed. It was a bit of a welcome surprise actually, and one that helped to set the mood that day. Much more than that though, I was excited to be back at this show. This time around though, I wouldn’t be alone (not like I was last year when I was there with our reporter Claudia), and our videographer extraordinaire Gee would be there with me. We were joined this day by our lovely reporter Alliyah. While we had an idea of what and who we would be meeting on the red carpet, one never fully knows until we get there. Thankfully, some familiar faces from the year before graced us with their presence. I have to give a lot of credit to Alliyah for getting into the mind of the celebs that were on the red carpet. It’s not every day that we’re at a show geared towards highlighting the finest science fiction creators and fans, and listening to Alliyah ask questions that I had always wondered about really gave me some insight to what makes people like what they like. Even though I had seen actress Marisol Nichols in a variety of sci-fi shows over the years (Charmed and Riverdale to name a few), I never knew what a fan of the genre she was. In fact, that day we learned a lot about the connections that the actors and actresses from the red carpet had to science fiction. We put together a video with highlights from some of those interviews (you can see that video later on in this article) so that you could listen in to their words directly from their mouths. 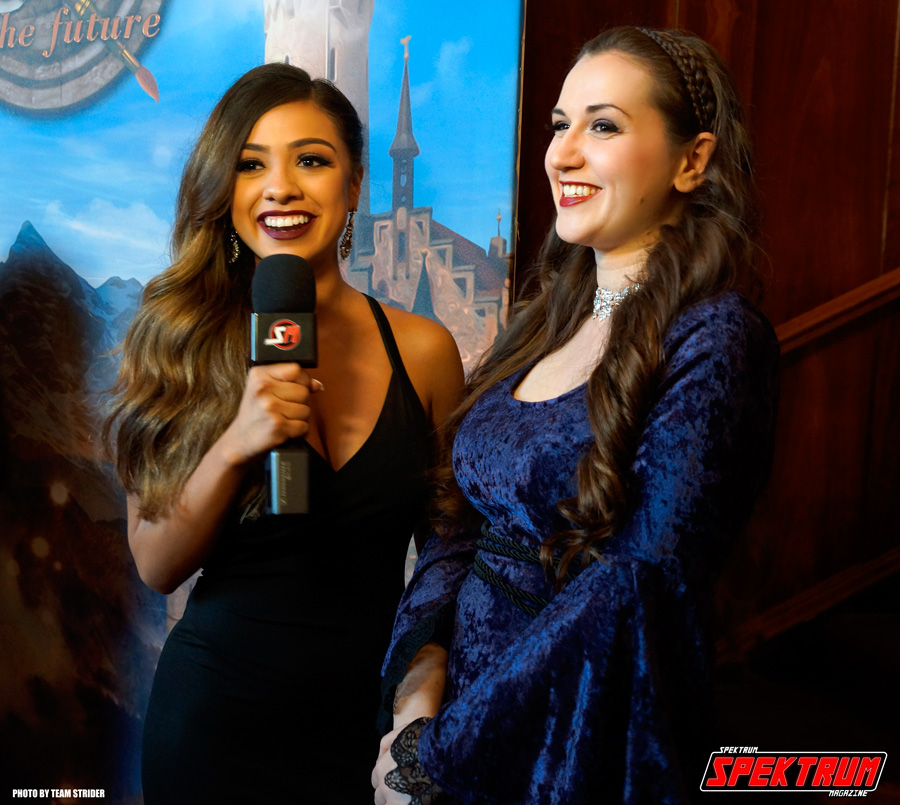 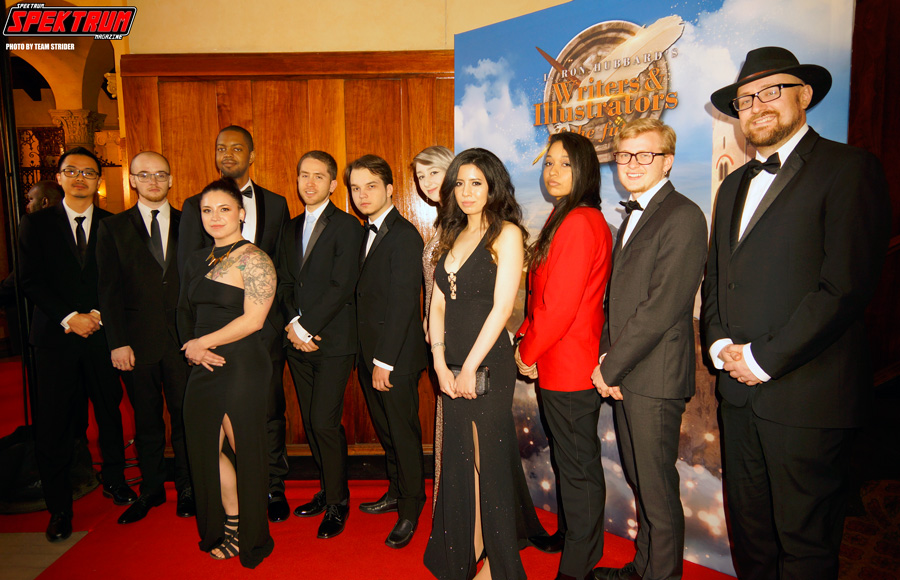 A view of many of the winners from the show 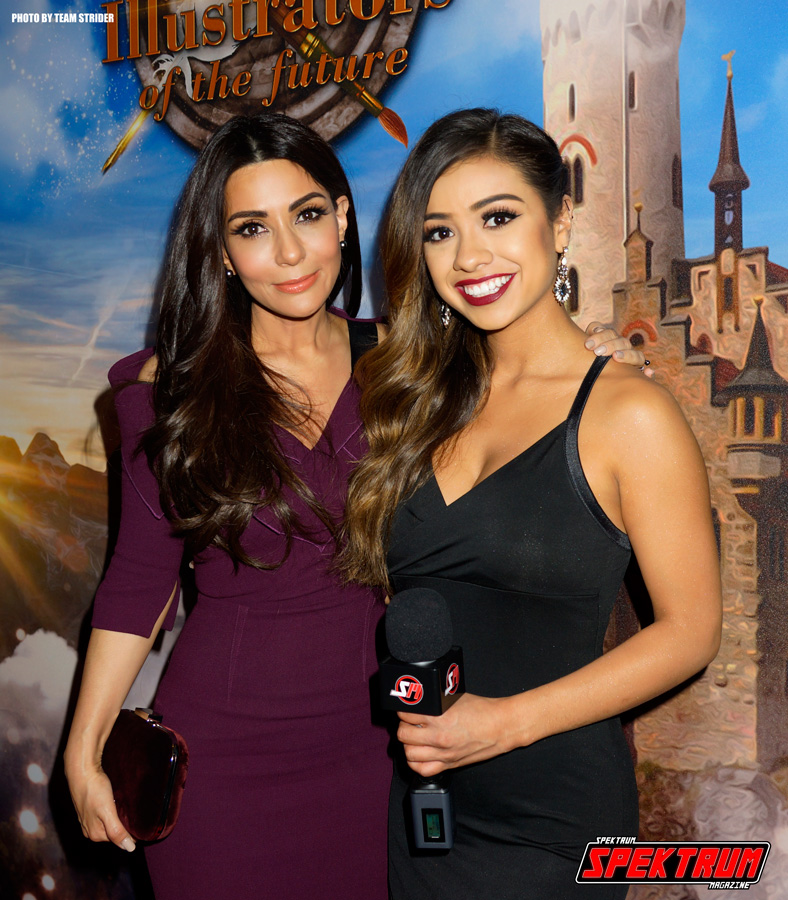 Dragon’s Head or not, we had a blast, and wouldn’t have expected anything else from this show. This is the second time around that we make it over to the show, and we’ll hopefully go next time around. I love the new location and the set up they had. Spending the time there with the writers, artists and celebrities was as always, incredible. But, while that was great, listening in on the interviews that Alliyah had with those people that made it special. It definitely takes a talent to speak with fans of their craft and bring out their passion for all of us to see. I feel as though I learned a little more about what makes these talented people do what they do, and what special place in their hearts science fiction has. Science fiction is for everyone, and learning about the different aspects of it really make me appreciate those old movies and books that I remember. Sure George Lucas was the man behind Star Wars and the universe behind it, but, it was his love of science fiction that drove him to write (and direct) the stories that would lay the foundation for everything that came after. It was his influences from movies, film, and books that drove his passion to create one of the most recognizable franchises in history. Those influences though, started with people just like the ones that were at the Writer’s and Illustrator’s of the Future (show). All it takes is one idea or even a string of ideas that someone, somewhere puts together to create a basis for the stories that will shape the future. The writer’s and illustrator’s (and the fans of their works) are the true showstoppers at this event, and we couldn’t have been any happier to be a part of it. Witnessing the future of science fiction grow into something that we don’t yet know of is a huge part of the excitement. Who knows, a few years from now, we could be witnessing the birth of the next movie series, and it could have gotten it’s start right here. We can’t wait to see what other talent this show brings next time. If it’s anything like the class for this year, the future is very much in good hands. Congratulations to all of the winners from the show, we look forward to reading your stories and enjoying your art.

Videos from the Red Carpet at the L.Ron Hubbard Writer’s & Illustrator’s of the Future

Interviewing some of the celebrities and personalities from the red carpet

At the L.Ron Hubbard Writer’s of the Future red carpet with actress Sibongile Mlambo 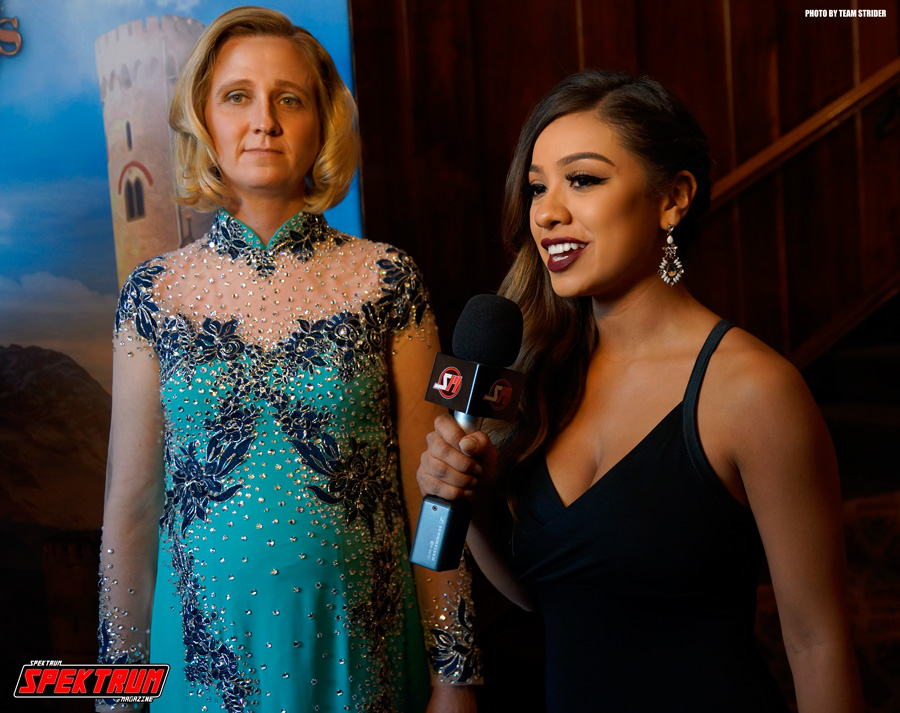 Alliyah with the winner of the Golden Pen award, Darci Stone 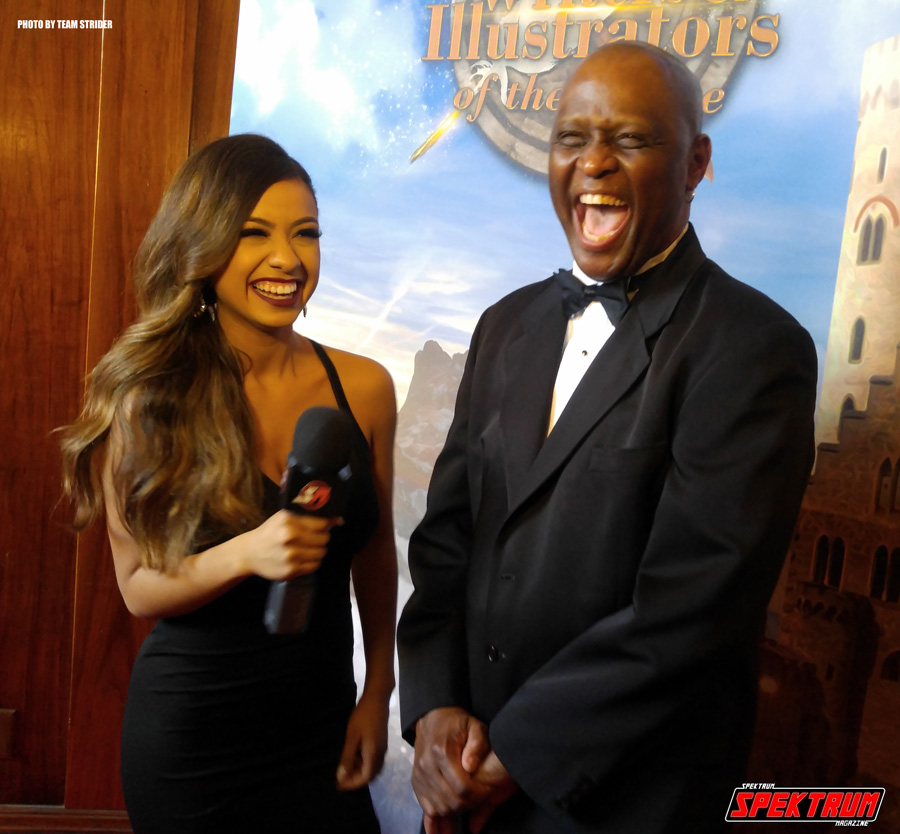 Laughing it up on the red carpet! 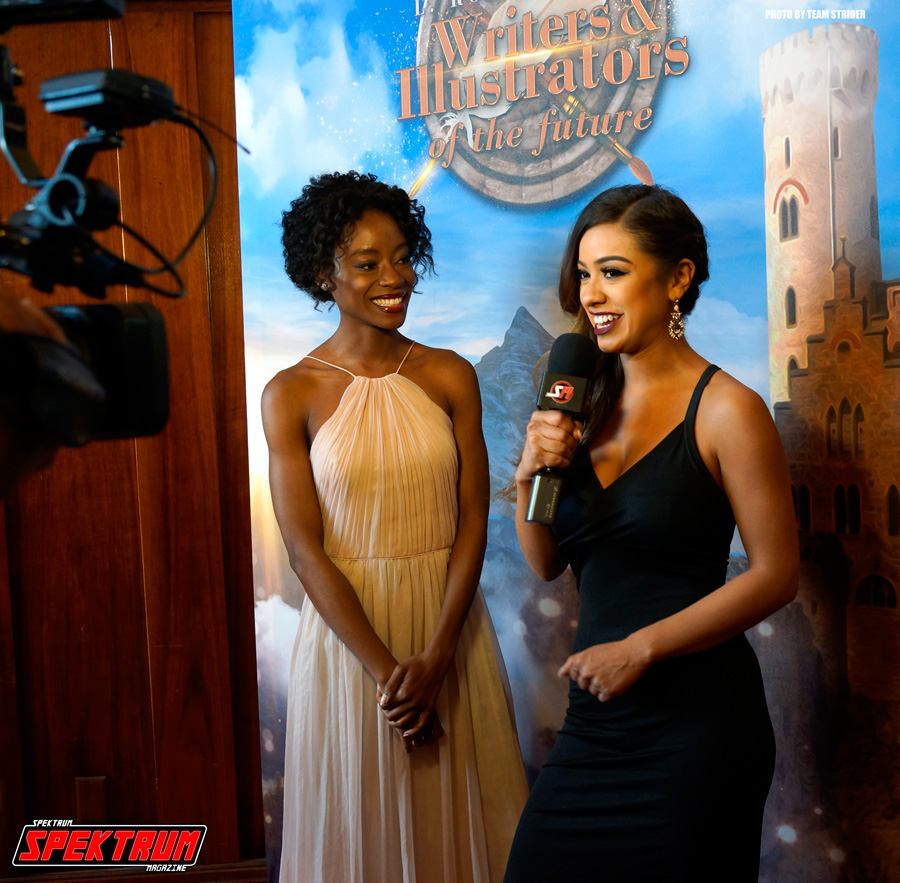 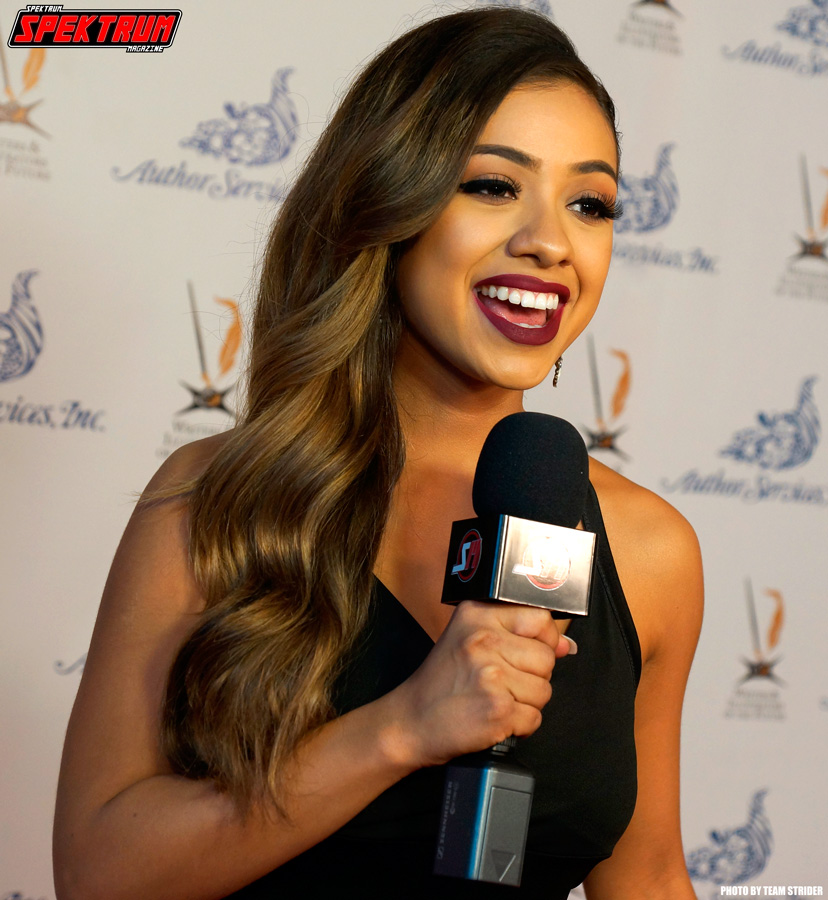 For more information on the L.Ron Hubbard Writer’s and Illustrator’s of the Future Show and any upcoming shows, check them out on their website at https://www.writersofthefuture.com/enter-writer-contest/

The New Kids on the Block Make Their Presence Known : Tuner Evolution Anaheim

The New Kids on the Block Make Their Presence Known : Tuner Evolution Anaheim

Over the years I've been to a lot of car shows, and in those years it's been amazing. I've been lucky enough...