SEMA is a huge trade show association that consists of a diverse group of manufacturers, distributors, retailers, and more was brought to life once more in 2019 from November 4th through the 8th. This event is held in the wonderful city of Las Vegas, Nevada.

*** Fun fact! The first location that SEMA was held was in the Dodgers Stadium in the city of Los Angeles in the year 1967. Today, Las Vegas remains to be the main home for this event, and sure enough, it fits that sock very well. ***

Party and cars? Count me in!

This year, I was fortunate enough to have experienced this event.

Sadly, I must say that there was no way that I was going to be able to see the whole show in one outing. Because, let me tell you, it is a very large event that covers more than one million square feet, and it is said to have an attendance rate of almost 60,000 people! That’s a whole ton of folks if you ask me! People from all around the world including individuals that work in the automotive industry, media, well-known artists and auto-performers come to SEMA, so you can say it is very well known in the automotive world. It is probably one of the most popular shows in the world without a doubt.

It’s hard to believe just how big this show is. You may never get to see everything because there is so much going on and in every corner and the energy is insane! You can literally stay stuck in any of the (show) halls still not having seen it all. There is always something going on, whether it be an interview happening in every corner, or someone painting a portrait on the next corner, or a dog puking on the floor (that really did happen). It is safe to say, that there is no way you can get bored at SEMA. Oh and did I mention free samples? Yup, a lot of those everywhere. I left with bags loaded with stuff. I had to make two trips to the event to pick everything up!

Haha, im kidding! But I really did get some pretty cool samples and air fresheners. I think I’m set with air fresheners for all 2020!

What I really enjoyed about SEMA was that they were super organized in having designated parts for all the different floor sections. They have a whole floor plan mapped out that consists of about 6 huge sections and those are then divided into smaller categories.

My favorite was North Hall, which contained a section that I really liked, “mobile electronics and technology”, and you guessed it, SOUND SYSTEMS! If you read my Nissan Datsun story, you know that I have come a long way from having actual house speakers routed in my old Datsun car, so North Hall was where it was at for me. It was so lively and awake and the vibes were poppin’, the music was bumping, and overall it felt super cool.

North Hall was not the only amazing section, the Wheels and Tires section in South Hall was also lively and filled with many hot rods and bods (and I’m not just talking about the wheels and tires! ).

Hot babes were scattered everywhere, and they were eye candy for sure. But don’t get too excited, the majority of the models are only stationed in South Hall, so enjoy their beautiful faces while you are there.

There were many beautiful cars that were brought to display from all over the world. While many cars caught my attention, there was one specific car that really stood out to me and many other individuals that walked by. This car was happily on display at the GoodYear Tires booth (in the South Hall).

Let me tell you a little bit of this car that I saw at the Goodyear booth. It was an incredible piece of art that has made history, and you may recognize it from the 1960 Jeri Lewis movie Cinderfella.

If it does not ring a bell, then let me be the first to introduce to you the 24k gold plated Golden Sahara II, a 1953 Lincoln Capri two-door.

This beautiful piece of art was in an unfortunate car accident, which basically wrecked it, but all thanks to George Barris, a well-known American designer who built many famous Hollywood cars, including the famous and well-known Batmobile in 1966, decided to take this car and turn it around, and with the help of Jim Street, who was then the holder of the car, both minds came together to build this piece of art. The car was designed with state-of-the-art technology like a black and white television, a curved rear seat that was built around a cocktail bar, a hi-fi radio, a tape recorder in between the passenger and driver seat, a shag rug that made it soft to-the-touch for your feet, the interior trim was all gold plated, and so much more. The car was full of the color gold that the name “The Golden Sahara” was introduced in 1954. In 1956, the car took the new name “The Golden Sahara II”. The reason being was because it was then customized even more by adding twin fins in the back, and adding the bubble top. Then in 1960 the Golden Sahara II won Best Custom And Display at the first annual National Champion Custom Car Show. Pretty cool huh?

Fast forward a couple years, the car has been through many events, T.V. shows, and it was also featured in many covers including the Motor Trend Magazine in 1955. In the late 1960s, Jim Street decided to put the car away in storage. The car was in storage but there were rumors that the car had made some appearances, but either than that the car remained put away in storage. Then in year 2017, Jim Street unfortunately passed away, and on March 14 2018, the Golden Sahara II was sold at an auction for a price of $350,000 to Larry Klairmont a well-known collector who is known for collecting some of the most enthusiast and beautiful collection cars the world has ever seen.

The Golden Sahara II was then restored, and Goodyear Tires was also listed as adding to the  build of the car. As you can see from the photos below, the wonderful set of urethane tires came equipped with the LED lights, which made the car look very futuristic and interesting to look at.

Many details were added to the car, making it come back to life, and ever since then the car has been featured in many magazines and appearances.

The future for the Golden Sahara II will continue, and I am excited to see what the future holds for this piece of art. I am very grateful that I had the opportunity to view this amazing car in person. The photos don’t do justice.

After seeing the Golden Sahara, I moved to the outside section of SEMA. The outside consisted of many amazing displayed cars, as well as drivers doing a bunch of stunts and basically creating a whole lotta clouds of smoke from the tires and rubber they were burning up. I had to hold my breath a couple times, haha, jk! It was cool, and easy to breathe. The only downfall about that moment was that it was extremely crowded and I could barely see the stunt show happening. I was only able to hear and listen to what was going on, including a man with a loud scratchy voice screaming on a microphone “ARE YOU GUYS READY TO PARTY?!!!”

It was pretty funny, but overall it was a very good time, the only downfall I would have to say that I experienced, was the traffic situation and the shuttles, but then again with any big event like that, traffic and time being postponed must be expected to some degree.

I was only there for 2 days, but I can say that I did catch a very good glimpse of the event, but definitely not the whole thing for sure.

I am sure that I will be back next year to catch more of it, and I am eager for that time to come again, because unfortunately I was not able to hang out as much as I wanted to in the North Hall with all of the cool sound systems. Thanks Daniel!!  (Editor’s Note: I didn’t think Angel would be so excited about those car stereos. Now I know. Haha!)

So until next time, SEMA. I will have my sound system ears ready for you 100%, and if you get the opportunity to attend, I hope that you prepare your sound systems ears as well.

SEMA was one for the books, for sure.

Words and Photos By Angel Muñoz

For more information on the SEMA Show and their upcoming shows please make sure to check out their website at SEMA Show Homepage.

This article was prepared or accomplished by Angel Muñoz and Daniel Navarrete in their personal capacity. The opinions expressed in this article are the author’s own and do not necessarily reflect the views of Spektrum Magazine, or its affiliates. 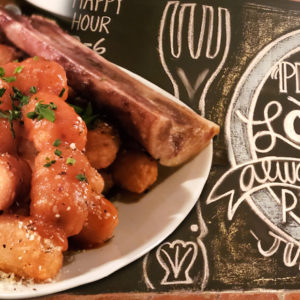 "People Who Love to Eat Are Always the best People" - Julia Child Every once in a while I come across a place that...