I remember back in the late 1999 seeing an ad on MTV. It was a contest that they were running for the upcoming year 2000. I remember seeing this ad and thinking it was the coolest thing ever. At the time I was still in high school, and I don’t think I could have entered it anyways, but, the partying atmosphere that MTV had back then was through the roof. The prize for this contest was unlike anything I had ever seen either. Because it was almost the year 2000, this prize was a chance to ring in the new year at Times Square in New York. While that alone would be good enough for a prize, this one went above and beyond just that (it was Y2K anyways, might as well go all out). The plan was that whoever won the contest would party not just in New York, but, in each timezone in the US. So, the person would party in New York for the moment that the clock struck 12 and again in different parts of the country, ending in LA. Basically the winner would chase the sun as they traveled west to keep the party going. It was a pretty crazy idea, and to be honest I don’t know if they ever pulled it off but man was that nuts or what? I had always thought that contest was the best ever. The prize was just so unique and offered up something we had never seen before. But, who would have thought that 10 years earlier there was an even bigger contest, and it was on MTV’s sister channel VH1.

Back in the late 80’s the VH1 Channel hosted one of the (if not, the) biggest giveaways of all time. It included 36(!) of the most amazing Corvettes ever assembled. These cars weren’t just any old Corvettes either, they were one for ever year that Corvettes had been in production. This went from 1953 all the way to the (then) current year, 1986. Every car was certified in good to excellent condition and they were all driveable. The value alone for these cars was worth over $1 million dollars. And that was in 1989 money! This was all a stunt to bring viewership and notice to the channel. In the days before social media you had to do whatever it took to grab people’s attention. And to say that this didn’t grab people’s attention would be an understatement. The interest came from all over the country and over 4 million(!) entries who would be received by VH1.

One person would eventually win this historic group of cars (believe it or not) and he was a Long Island man whose name was Dennis Amodeo. Normally this is where the story ends. Maybe we’ll hear about the owner down the road or they end up living the rest of their life in anonymity. Now, winning such a massive prize would be enough to overwhelm anyone, and this may be what it was that pushed him to sell of his newly won collection. I mean, it’s not common to own so many cars, let alone as many as classic and valuable as these. So, it’s entirely possible that he was already looking at unloading these if the price is right. Well, it turns out that while the contest and all of the hype surrounding it was going on, there was someone that had gotten wind of it. Artist Peter Max had heard of the cars and was ready to add his chapter to this intriguing story.

So, who exactly is Peter Max? Well, I’ll admit, I had never heard of him and thought I would do a little digging around. I hadn’t even finished typing up his name in a Google search when it came up. Peter Max wasn’t just any artist, he was one of the most famous on the planet. He had worked on the 1994 World Cup poster (that I remember seeing everywhere as a kid), one of the most famous paint schemes ever for a Nascar driver (a sick paintjob that ended up on Dale Earnhadt Sr.’s #3 car), album covers for Taylor Swift and the coupe de grace, the artwork for the Beatles Yellow Submarine. Holy smokes, I had always wondered who did that, and now I knew. Apparently it was in a dream that Peter (Max) had where he 36 Corvettes (from the VH1 contest) would be driven on to the field of a football game with cheerleaders on the back of them. This dream was so powerful that he felt he needed to get his hands on those cars. This was a project that he felt he could find financial backers for, and over time he and Dennis (Amodeo) would end up brokering a deal for the cars. And just like that, this legendary set of cars would change hands and thus would begin one of the strangest chapters in automotive history.

The next 30 years would see little to no talk about these cars and through a series of unfortunate events the cars were lost to time. While many people may have forgotten about the cars, not everyone did. It turns out that while the cars were owned by Peter Max there were people that had been wanting to purchase the cars. While they did move locations throughout the years, it was their discovery in a New York city garage that showed everyone what had become of them. Let’s just say that they were not in the best of shape. Who knows what it really was really changed Peter Max’s mind, but, eventually he sold all the cars to the Corvette Heroes. They were thrilled to finally have them and have the chance to restore them. In fact, not only are the Corvette Heroes restoring these cars, they will be giving them away!

Yes folks, that MTV Y2K trip, while awesome, doesn’t hold a candle to this contest. Not to mention that instead of having one night to go crazy, you can own something that could last you a lifetime. And, the best part of it is, that while this seems similar to the first time that the contest happened, there are a few big differences. Instead of there being one ultimate winner, there will be one for each car that is being given away (36!). So, the chances that you could win these is better than it ever has been before. The best part is that the money that is going to be raised by this contest will be donated to the National Guard Education Foundation. So, needless to say, there will be a lot more winners than there ever was.

We were lucky enough to get to chat with the Corvette Heroes and hear more about this exciting endeavor. I don’t know about you, but, I am more excited about this then anything I have heard about in a long time. The contest is going on now, and if you are interested in learning more or even winning any of these superb machines, you owe it to yourself to enter and own a piece of history. I can almost guarantee that we will never see anything like this ever again. It feels, in some strange way, that almost like all of the craziness that happened over the years almost had to happen for people to be able to see this one more time. The saying goes that sometimes truth is stranger than fiction, and in this case it is definitely true.

I want to thank the team from Corvette Heroes for taking the time to chat with us at the LA Auto Show as well as Lauren Compton for giving us a walkaround. I also want to thank wavywebsurf from YouTube for filling in some of the blanks to this story. I happened to see his video not long after the interview (purely by chance) and wouldn’t have ever guessed that there would be more to the story. 6-degrees of separation I suppse. Make sure to check out his video HERE.


Words and Photos By Daniel Navarrete

Video Link to The Lost Corvettes by wavywebsurf

For more information on the The Lost Corvettes and their upcoming giveaway please make sure to check out their website at Corvette Heroes Homepage.

This article was prepared or accomplished by Daniel Navarrete in their personal capacity. The opinions expressed in this article are the author’s own and do not necessarily reflect the views of Spektrum Magazine, or its affiliates.

Checking out the Future at the LA Auto Show 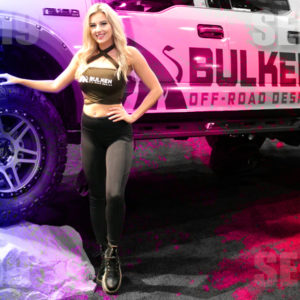 Checking Out SEMA For the First Time by Angel Muñoz SEMA is a huge trade show association that consists of a diverse...

December 14, 2019
Copyright 2013 Spektrum Magazine All Right Reserved.
Back to top