Checking out the Future at the LA Auto Show

The future is one of those things that isn’t very certain. With all kinds of news of the chaos of the world and the uncertainty of where things go, it’s hard to know where exactly where we will be one, two or even ten years from now. But, if there is any one thing that is not stopping or slowing down, it’s technology. I remember I was talking to one of our Spektrum team members about how things had changed so rapidly in the last few years. I’m thirty-six right now (damn, I feel old just typing that), and our team member Kena is twenty-two. We were talking about the internet and how fast things were changing. I told her that there was a time, not very long ago, where even YouTube didn’t exist. The look she gave me when I said that has to be one of the funniest things I had ever seen. She couldn’t believe it. To think that YouTube has only been around fourteen years, and not even in the form that we know it now. It’s crazy. While most of what we see as entertainment has changed a lot, there is one thing that is changing just as fast. And that is the automotive industry.

It was just over one hundred years ago that the first (modern) car was introduced by Karl Benz. This car wasn’t anything special in terms of today’s standards, but it paved the way for every car that would come after it. From the time it would come out until the hundred years after it there would be incremental changes made to cars. As technology progressed you would see it reflected on cars. This, for the most part didn’t change much over that long stretch. Sure the bodies and engines of cars changed drastically (as did the materials and construction), but, the fundamentals didn’t really change. While I won’t get into the fact that cars, even now, are still using a lot of the same basic design philosophies that have been pioneered many years ago, things are definitely changing. We live in the silicon age and cars more than ever are reflecting that. I never would have imagined that cars would be packed with so many computers and gizmos that it would, in some ways, reflect an aircraft. The amount of options and tech that is packed in to cars is changing so rapidly that for the first time we are seeing real big changes under the hood.

While a lot of us are exposed to cars in different ways we don’t always get to see the latest and greatest tech until it has already hit the streets. Unless you work for any one of the automotive companies it’s very difficult to know what is going on behind closed doors. But, that isn’t the case if you happen to go to trade shows or events that just might give people and the press a glimpse into the future of cars. Enter the LA Auto Show.

The LA Auto Show is an annual convention that allows everyone to see what is on the horizon and is coming out to streets near you. While this show is nothing new, and we have been to it several times it is within the last few years that we’ve seen some of the biggest changes. I can’t remember how rapidly cars have changed since the introduction of the electric car. Now, the electric car is nothing new, and there were prototypes floating around since the early 1900’s, but, it has been the huge increase in reliability and tech involved that has made it mainstream. Nearly every new car from Honda to Porsche, Ferrari and even Mitsubishi has been touched by the fuel efficient bug. I never would have imagined that it would be like this, but, it is and we are seeing cars routinely get four-hundred miles or more on a gas tank. It’s pretty awesome. And we got a great glimpse of the exciting future of cars at this last show.

The days of analog controls (meaning any controls that require you to manually push or press buttons, knobs, levers or sliders) are quickly going away. Porsche showed up to this most recent auto show and previewed a display of their current and upcoming car interiors. Wouldn’t you know that those analog controls are all but replaced with LCD touch screens and the like. I remember first seeing that on a Tesla, and it was pretty eye-catching. I guess it made such an impression on car designers that we are seeing it more and more, and no doubt we will see more of it in the future. Porsche weren’t the only ones doing this as plenty of other carmakers are adding high tech equipment to their vehicles. I think the flexibility that these components add is making them more and more relevant. I mean, it’s easier to put a tablet into a car and slave all the electronics to it rather than to have multiple components and have to create plastic molds for all of them. Manufacturing-wise it’s pretty genius. Maintenance is a different story however. But, that perhaps is a story for a different day.

The LA Auto Show is a great place to be at though to see the latest and greatest offerings of the future. The show takes place between Thanksgiving and Christmas and offers up plenty of reasons for people to come on out and see what is coming with their own eyes. Not to mention it also lets people sit inside the vehicles and ask any number of questions with the companies themselves. If you’re a buyer or in the market for a new ride and want to see what the coming year (and beyond) will bring, this is the place to do it. We like to go to see where the future of cars will be and this year (once again) did not disappoint.

Companies such as Lexus, Alfa Romeo, Acura, Toyota and Karma (among many others) were all on hand to show us what they have in the oven. I can’t say that I didn’t come away disappointed. It’s not often that I am surprised with things. But, when you see some of the most beautiful car designs that you’ve ever laid your eyes on, it’s hard not to be. That was the case this time around. I mean, the cars that were there showed us truly what is going on behind the scenes and what we might see in cars of the future. Many cars are already all electric, but, they are also offering things like auto pilot, seamless construction, intuitive (and upgradeable) touch controls, new drivetrains, exotic material construction and better than ever efficiency. It’s amazing, and all of these companies are not only competing with one another, but, with other startups and design engineers from around the world.

The race to have the best tech is neverending and the only winners will be consumers. The LA Auto Show is a glimpse into that future and one that is sure to be different sooner than later now. I think that if Karl Benz were alive to see what his creation would someday become he wouldn’t recognize where we are at now. This truly is the new age of the automobile. One that is not so much defined by power or status but by efficiency and thinking outside the box. It is amazing and this years show is made us excited for what the future is going to hold. Never would I have thought that the reality of tech would outpace the imagination of the concept artists from film. We may get flying cars sooner than later, but, they will be cooler than we ever imagined.

If you ever get a chance to head over to the LA Auto Show, definitely make it a point to check it out. This year was one of the best we had been to. I personally could never make it to any of the press conferences for the fact that I work throughout the week, but, that wasn’t the case this time around. Thankfully I was able to see what it was like and hear it from the heads of these companies themselves. It was a great show. My only complaint was that the annual kick-off party (this is usually open to members of the media and industry insiders) was canceled. We’ve posted about it before and it is one of my favorite parties to attend. There is always plenty of food, crazy entertainment and plenty of industry people to talk to. I, and the team love it. Unfortunately, they canceled it this year and we weren’t able to go. I hope this changes the next time around and we can see what it’s all about. Regardless, you definitely need to check this show out. I wouldn’t worry about not being being able to make it on any given day. This show, unlike others, goes on for two weeks, so there is plenty of time to make it.

Check out some of the amazing things we came across at this last show down below!!

For more information on the LA Auto Show please make sure to check out their website at LA Auto Show Homepage. 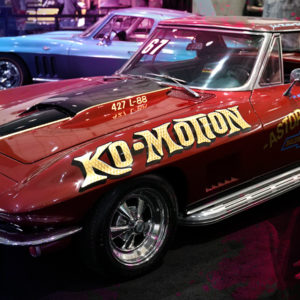 Could this be the best giveaway of all time? We think so I remember back in the late 1999 seeing an ad on MTV. It was a contest...