It’s not every day that a celebrity comes to a small town boxing ring. While I’m sure it happens quite a bit in Hollywood, it doesn’t happen too often in Orange County. But, when you know people, that know people, that know people, well, sometimes, just sometimes, big things can happen. That was exactly the case when one of the biggest celebrities on the planet made his way to the SoCal Boxing Academy in Santa Ana. While Santa Ana may not be a small town by any means, it isn’t the first place you think of when you think of celebrities. It was not long ago that the man behind ‘Golden Boy’ (Oscar De La Hoya) himself made his way to this boxing academy and gave back to the community. His visit to this academy wasn’t just a moment where he was passing through, but, was a moment to recognize some of the amazing students that attend their (the academy) and those that are up-and-coming. It was a great moment, but, the journey to get to this point was one full of excitement and struggle.

I remember way back when our team members Hanna and Sam told us about a boxing academy that their dad was putting together. He had always been a fan of boxing and it was his dream to be able to make a place where people could go learn the art of boxing. This was to be a place that wasn’t just for people that could afford to be there, but for anyone and everyone. It was an ambitious idea and one that is hard for the average Joe to do. But, that just isn’t how Mauricio rolls. He is the owner and the man behind this incredible academy (not to mention the father of two of the most amazing team members one could ever hope for). It was (Mauricio’s) idea to make a place that would be accessible to everyone. Well, after lots of hard work and the support of family and friends, his dream came true. All of that hard work didn’t go unnoticed though, and it wasn’t long before the the Oscar De La Hoya Foundation would hear about the SoCal Boxing Academy and the work that they were doing there.

I got a call about this event about a week or two before it was going down. I didn’t know much about it then, but, just knowing that Oscar was showing up was reason enough to go. I didn’t know what to expect and to be honest, I didn’t ask too many questions. I usually like to be surprised when it comes to events like this, as I think it helps to make it more exciting and open to surprises. That’s exactly how this went down that day too. I had never been to Maurico’s boxing academy before, and it was a bit surprising. I used to work in Santa Ana and never knew that it was on the same road that I drove by every day. Needless to say, it’s located in the heart of Santa Ana, and is pretty easy to access for anyone that is going there. I’m sure that because of it’s easy access and well-known location, that there are always people there, but, the day that Oscar (and his crew) decided to make their visit, I could have sworn that all of Orange County decided to show up. It could have been because of Oscar’s appearance, but, then again it could have been because of the taco truck. That tends to bring me to any event (#jussayin’). But, man, oh man, there were a lot of people at the event that day. They were all there for a chance to meet one of the legends of the boxing and Latino world. It’s one thing to be one, but, to be both is very impressive. So, for a lot of the fans in attendance (of which there were many), it was an opportunity to meet with someone that made it to the top of their respective craft. Oscar was not only a champ professionally, but, a Gold medalist and entrepreneur. It is because of his accomplishments over the years that has inspired several generations of young folks. It didn’t matter where you’ve come from, but, with enough determination and will, you can make it.

Maybe that’s what was so inspirational about the event that day. The event was billed as a meet-and-greet type event with Oscar De La Hoya with giveaways and awards (to be given out). And while that certainly did happen, it was interesting to see Oscar and Mauricio share their admiration for each other and share it with everyone there. I have no doubt that this event served as an inspiration to a lot of the kids there and we may one day see another champ come from that location. I won’t forget what one of Oscar’s reps said that day. He said, “There are many celebrities out there, but only Oscar came out to meet with you”. He was right. Oscar comes from humble beginnings and was able to be successful after a long road of challenges. At the same time the very academy we were sitting in was put together by another hard working individual (Mauricio). It was great seeing how this event came together and knowing all of the work it took to get to this point. Everyone in that building had a hand in making it come together, and seeing the eyes of all of those kids light up made it all worth it. While it was hot as hell that day, you wouldn’t know it by the smiles from everyone there. I know I, just as much as the next kid, walked away a little more inspired than I was before.

Kudos to Oscar, Mauricio, Hanna, Sam and everyone involved in making that day happen. 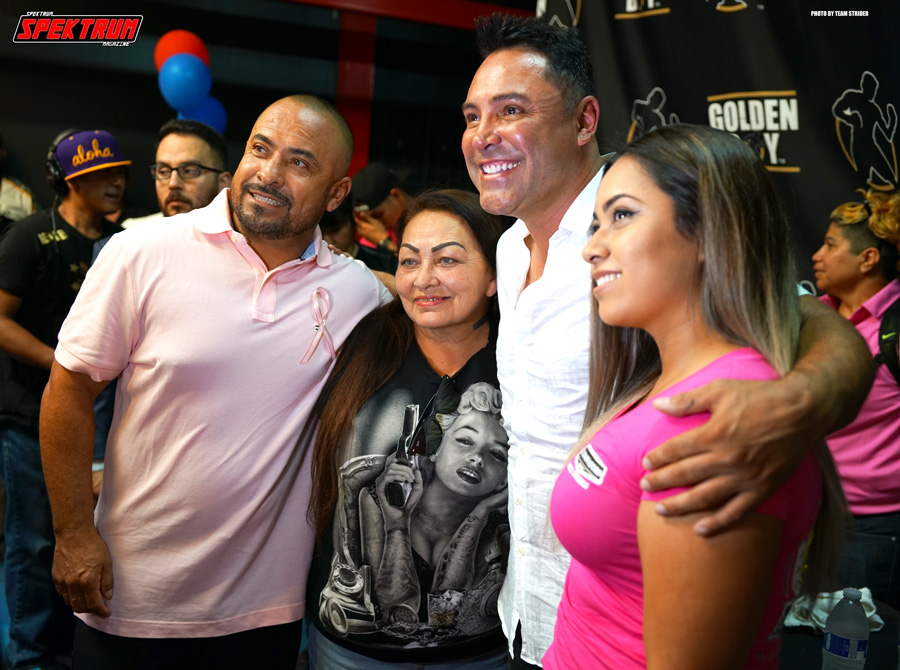 Oscar De La Hoya meets some of his fans

Sam, Maurico, Hanna and little one are all smiles at the show

There were a lot of people at the meet and greet 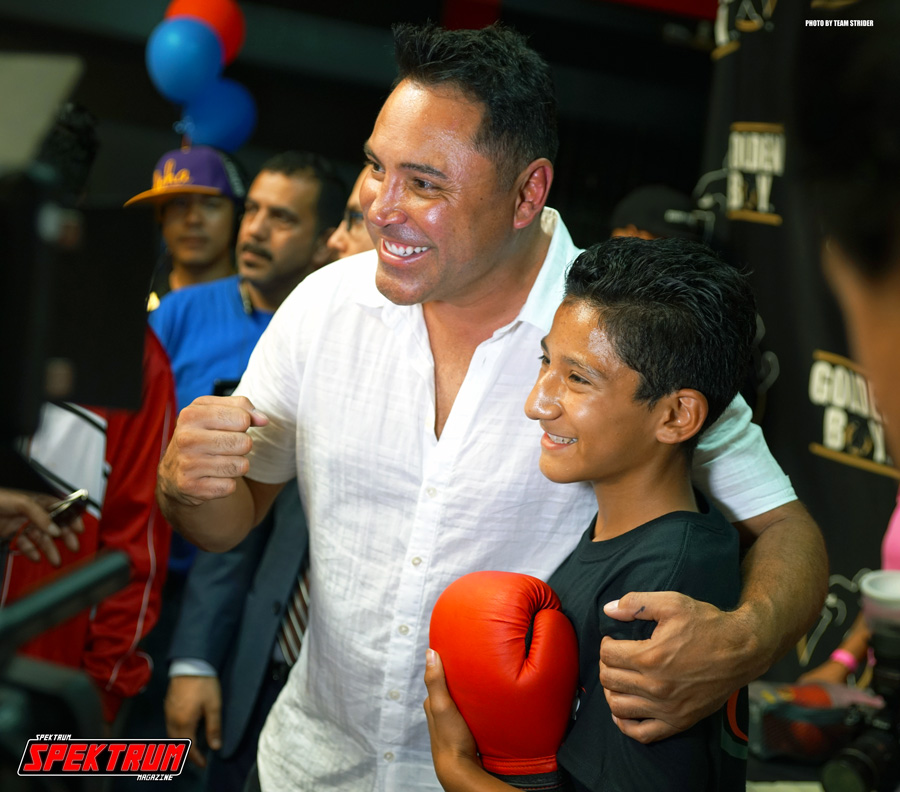 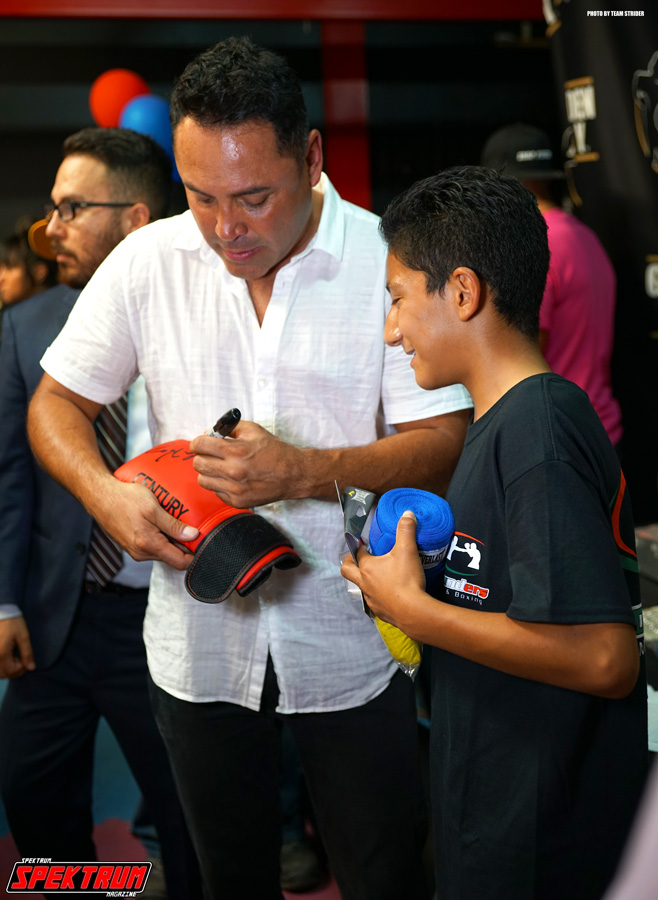 Signing a pair of boxing gloves 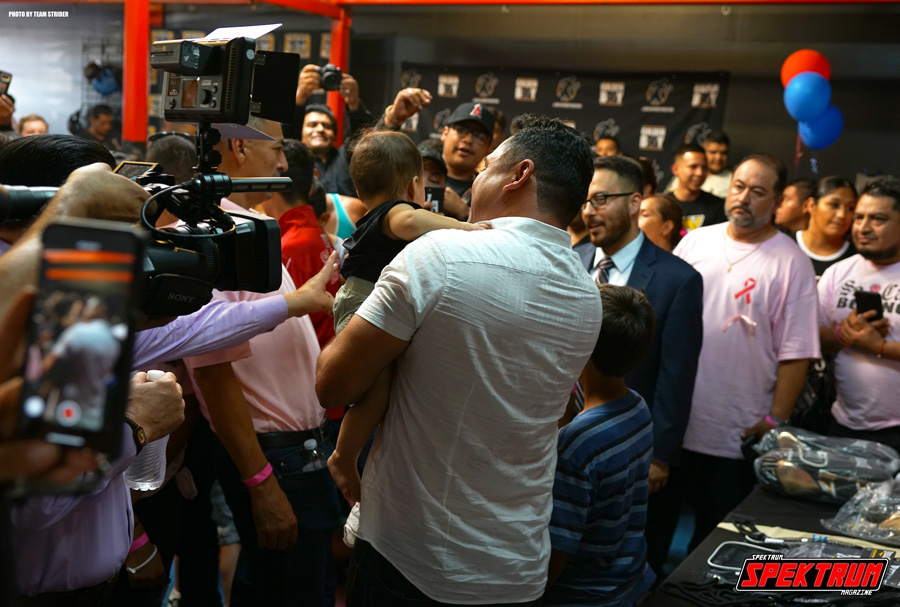 Oscar and a baby. You gotta love it 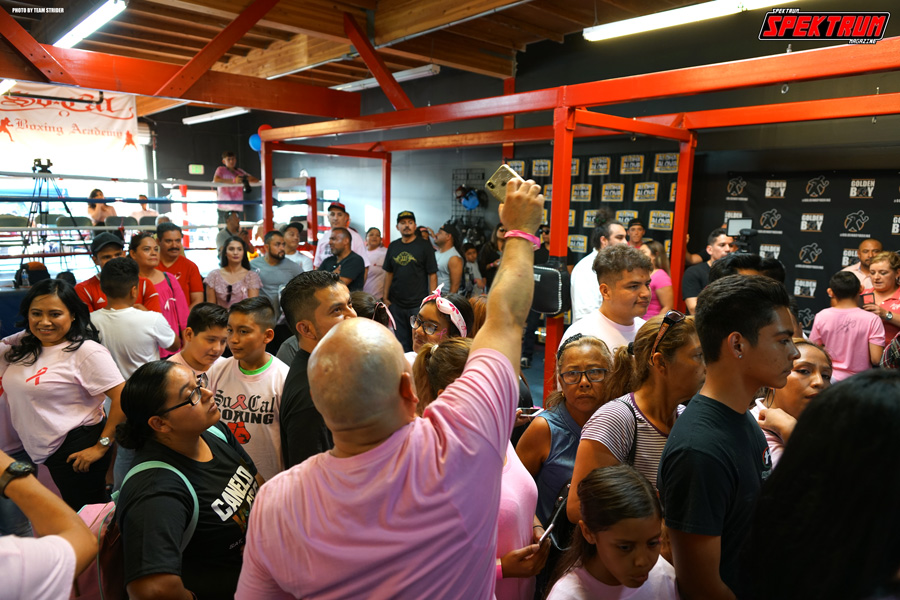 Many more people at the event 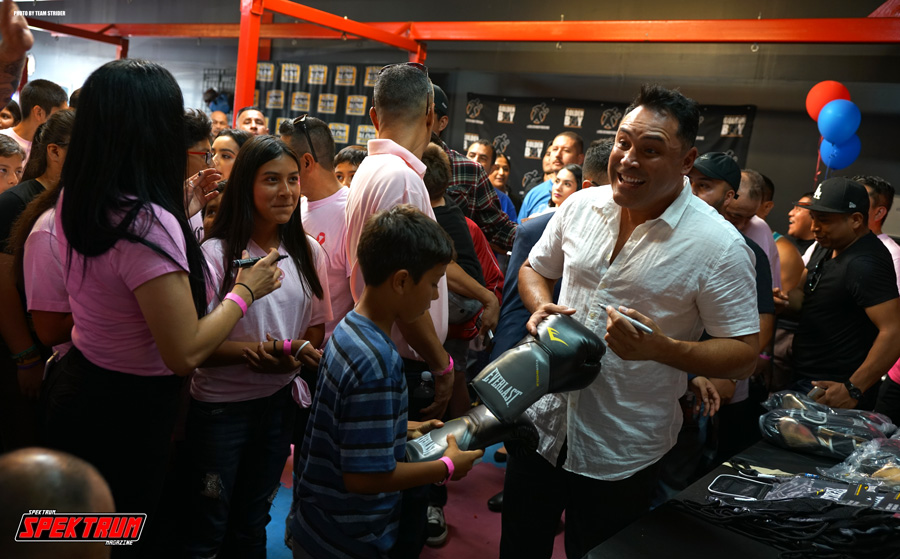 Signing some more gloves for the fans

Sam with her little champ 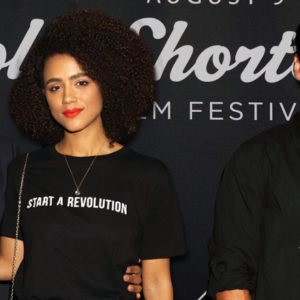 Hollywood is an interesting place. It is a place that is unlike any other place in California. California...