Partying the Day Away at the SoCal Motorcycles Open House

I remember years ago when I first saw the video game Hang On. While most kids I knew growing up owned a Nintendo I grew up with a Sega Master System. It was the Sega console before the Genesis and one amazing piece of hardware. Sure it didn’t get the love that the Nintendo ever did, but, for those folks that had one like I did, they knew it was awesome. The graphics were sharper and more colorful than the Nintendo and the sound had a wider range of blips and bloops. My dad bought me the system out of the blue when I was a kid. I don’t know why he did, but, considering he was a huge video game fan it totally made sense. I loved the Master System, and one of the first impressions I ever had with the system was a game that came packaged with it. The game was a Sega classic called Hang On. If you’ve never heard of this game, then you don’t understand just how incredible it was. Seeing this game back in arcades as a kid was one of the craziest things ever. Instead of sitting or standing in front of an arcade cabinet you rode this game on a motorcycle. Yes folks, you actually straddled a motorcycle and played this arcade game. Needless to say it made an impression on me, and finally getting the game and being able to play it at home was a dream come true. Sure it didn’t come with the crazy motorcycle-arcade experience, but dammit, it was amazing. Being able to race against other bikers in a sleek and sexy 80’s sport bike (some of my favorites to this day) in some of the coolest places and at the fastest speeds was something that I couldn’t get enough of. In fact, I think it was at that moment when I really began to fall in love with motorcycles. I had never even ridden in one up until that point. But, you know how it is. When the seed is planted you can’t help but dive right in to the world of bikes. Fast forward to now, about 25 years later and the love for motorcycles is definitely still there. Little did I think though, that I would have the chance to be a part of the scene that I so loved and admired from afar. 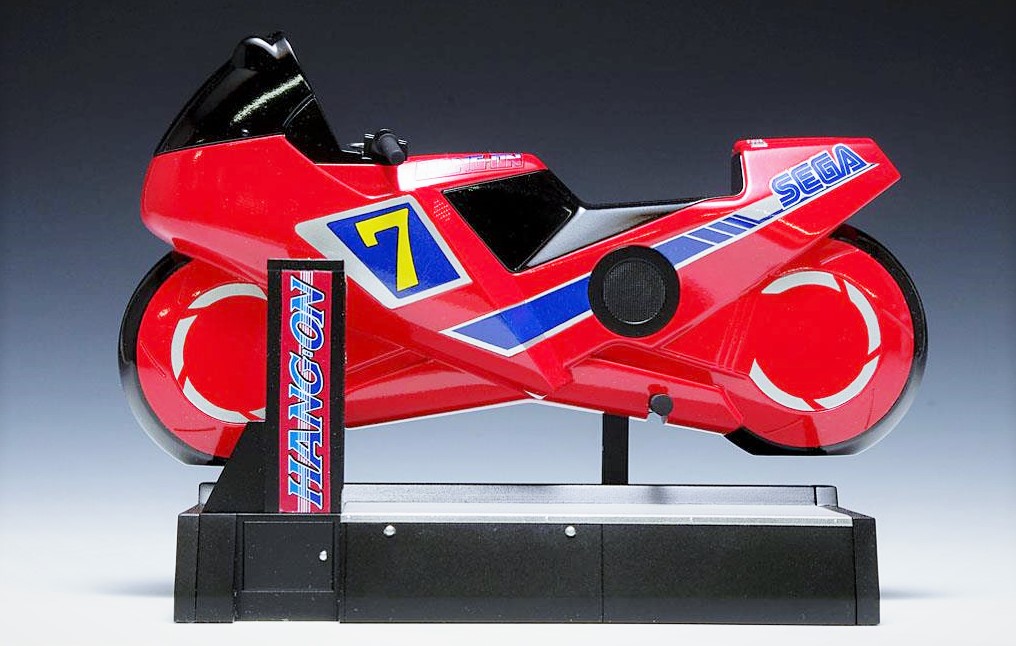 Believe it or not, this was an arcade game. Oh Hang On how I miss you!

It only took about 25 years, but, with the help of our team (Team Spektrum) and our amazingly beautiful friend Gabrielle, we would have a chance to be a part of the motorcycle scene. You see, I live just miles from the Southern California Motorcycles showroom in Brea. It’s a place that I’ve seen for a long time and never stopped at. I hate to say, but, not owning a bike made me stay away. But, occasionally I would drive by and see a number of motorcycles lined up and around the showroom. It looked awesome and while I never did stop there, I had always wondered what the occasion was. I would come to find out that this gathering was the annual Customer Appreciation Show. This was something that we just had to be a part of, and when the opportunity to join the show presented itself, we jumped at the chance. I was so excited. We had never been to a motorcycle show, and all of those years of pent up excitement were ready for this. Not long after hearing about this show, I hit up our team members Brandon, Gee, Ily, Kiara and Shanik to come out and represent Team Spektrum. I was excited to say the least. After years of going to motorcycle shows it was finally time to be a part of it, and even better, I would be with the #squad. Aw yeah, we were on the up and up!

When the day of the show finally came, I was giddy as anyone could be. Sure the morning started off with a lot of rough patches (hell, I think I could write a novel of all of the things that tend to go wrong on the days of events),  but as soon as the tent and everyone arrived to the location, it was on like Donkey Kong. I wouldn’t have imagined it, but, on a day that was hotter than the 9th level of the underworld, there were a ton of people that came out. With the promise of sweet motorcycles, motorcycle fans, sunshine and free food (yup, they had that too), plenty of folks answered the call and showed up. You could definitely feel the passion of motorcycles in the air. I don’t know if it was the smell of the fuel in the air or the smell of hamburgers that got me going, but, it was all equally amazing. While I expected to see a plethora of Suzuki’s and Yamaha’s (and I certainly did see that there), I didn’t expect to see all of the custom bikes, cruisers and Harley’s that were there. In fact, there were even a few cafe racers and British bikes that were there as well. It was quite an assortment, and definitely shined bright in the brilliant SoCal sun.

We had a great time at the show and just like in previous events we had teamed up with our good friends from 360 Products. And just like in times previously, we had plenty of giveaways and prizes for the people that showed up and spun the prize wheel. We had quite a few winners too. I was a little jealous of the guy that won the prize bucket. I mean, who wouldn’t want all of that good stuff. I am a life-long Brazilian Mist fan, and it was a great feeling knowing that someone got themselves a really useful product. The funny thing was that the guy who won couldn’t carry the bucket with him. Having come in on a bike, I remember his girlfriend having a laugh when she asked him how he would take it home. I don’t know how it happened, but, he definitely was able to take it with him.

So yeah, this show was a long time coming, and something I wish we as a group, and me as a person had been involved in a lot sooner. It’s not every day that we get to hang out at a motorcycle show and with the squad. But, this one was special. Seeing our team enjoy the festivities of the day and enjoying the tasty grub and company of other riders was a real treat. Even if it was hotter than two hamsters farting in a wool sock we wouldn’t have had it another way. Besides, it’s not every day that I get a chance to reminisce about a time that I miss. My love of bikes first started when my dad bought me one of my first motorcycle (video) game to when I first rode on a motorcycle (one of my cousin’s 1980’s Kawasaki KLX dirt bikes), to this moment, being here at the SoCal Brea Motorcycle Open House. All those sequence of events and everything in between really cemented my love for bikes. I’m glad that I got to share those new memories with the people I care about and with new friends. That’s what the this community is all about. Family, friends and fun. So, I just want to end this by saying than you to everyone from my team that made it out to this show, to everyone that stopped by our booth that day (and won prizes) and to the entire staff at the SoCal Brea Motorcycles for being so welcoming. We had a great time, and by the looks of everyone that was there that day, they did as well. 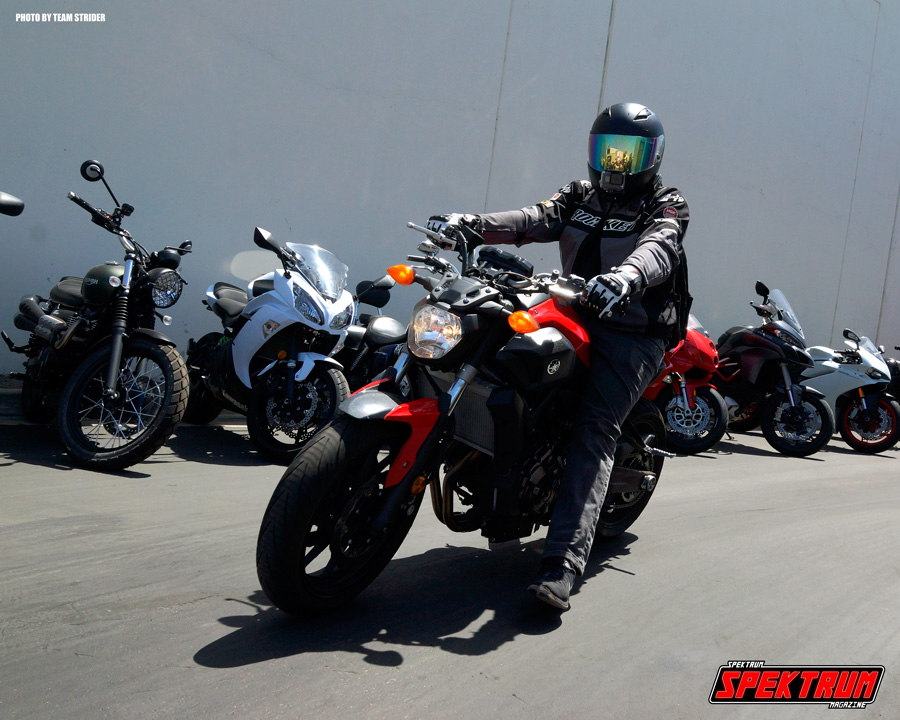 Turning and burning at the SoCal Brea Open House

Lots of bikes made the trek to the show! 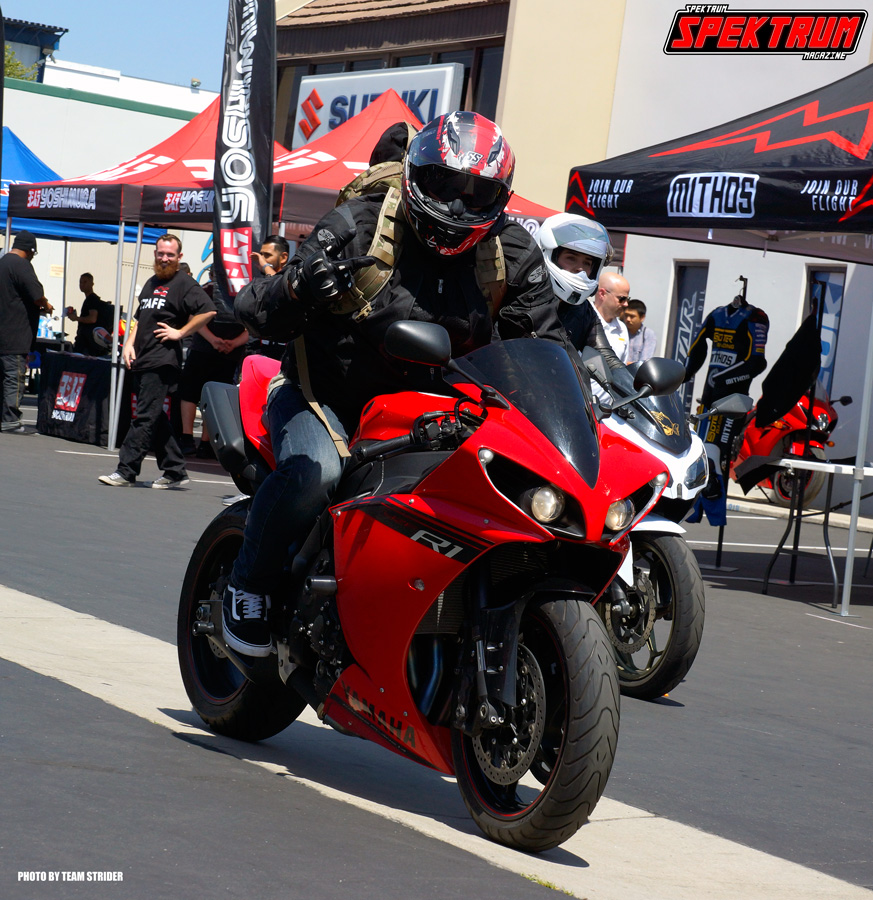 You can’t see his face, but, we all know that he’s smiling 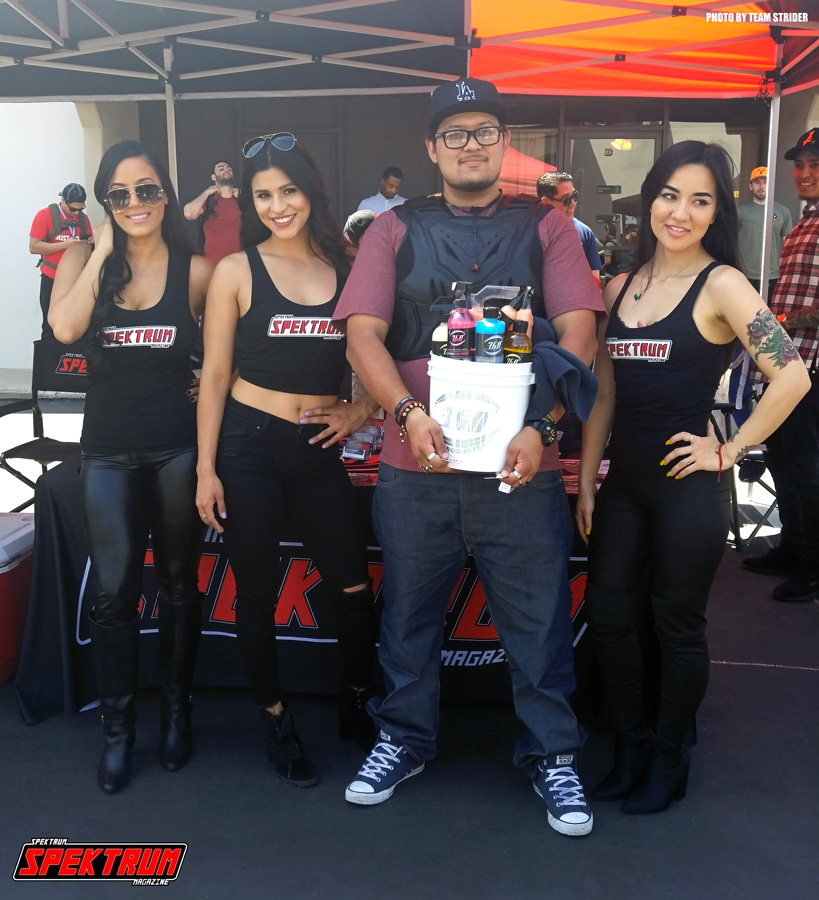 Congrats to the winner of the 360 Products Raffle! WooHoo!! 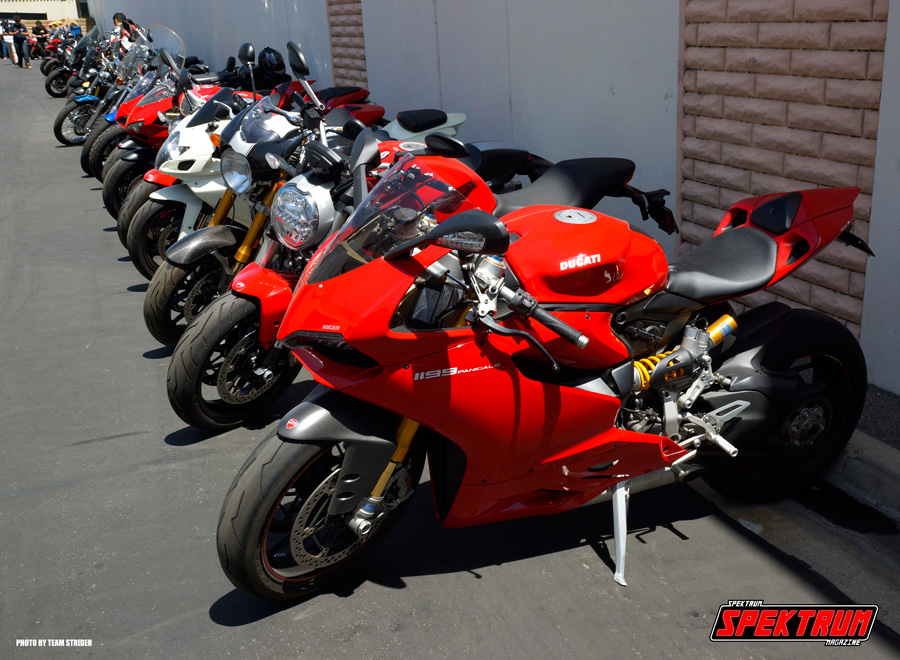 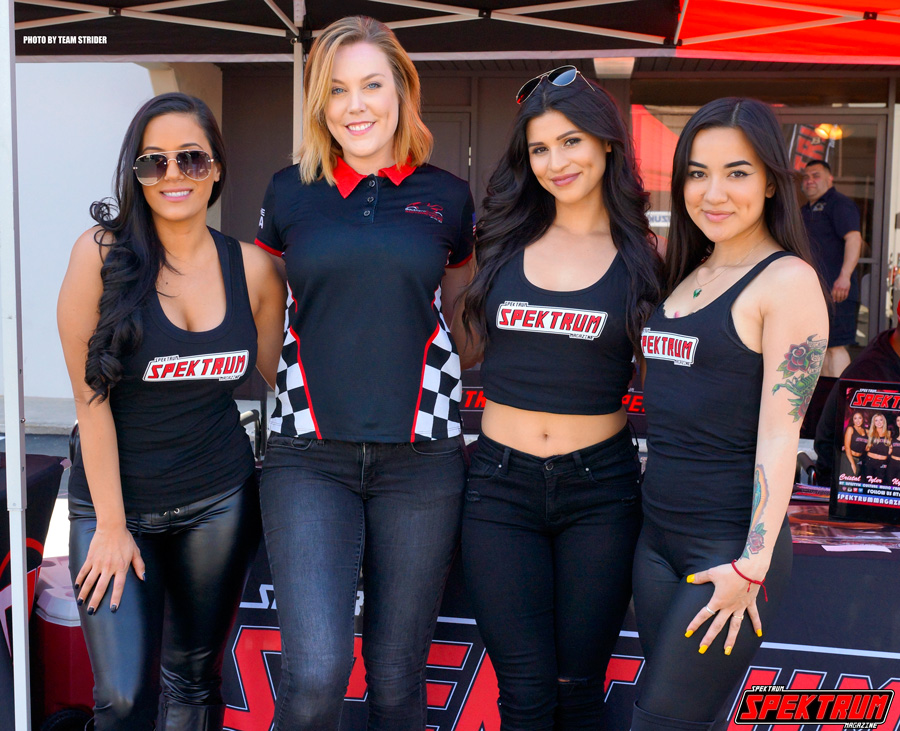 Our lovely Spektrum team members with the always beautiful Gabrielle 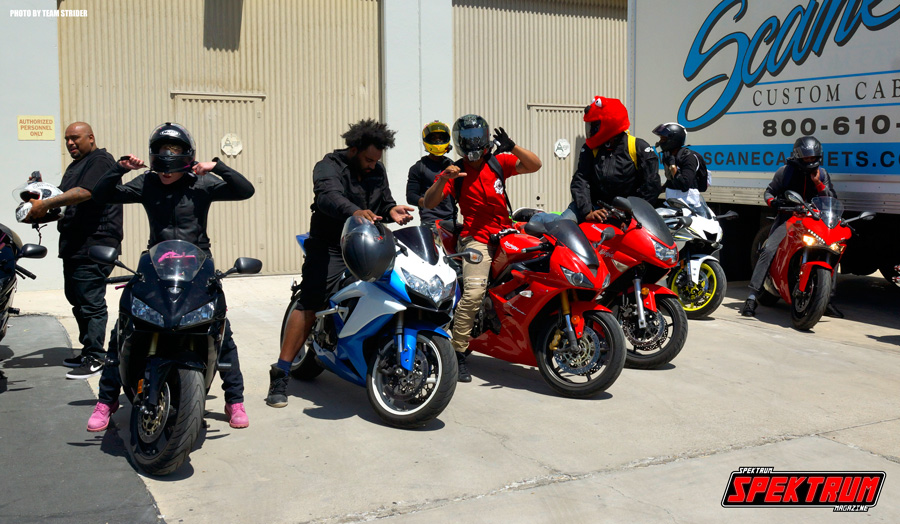 A group arrives to the show. Ready to party and ready to eat! 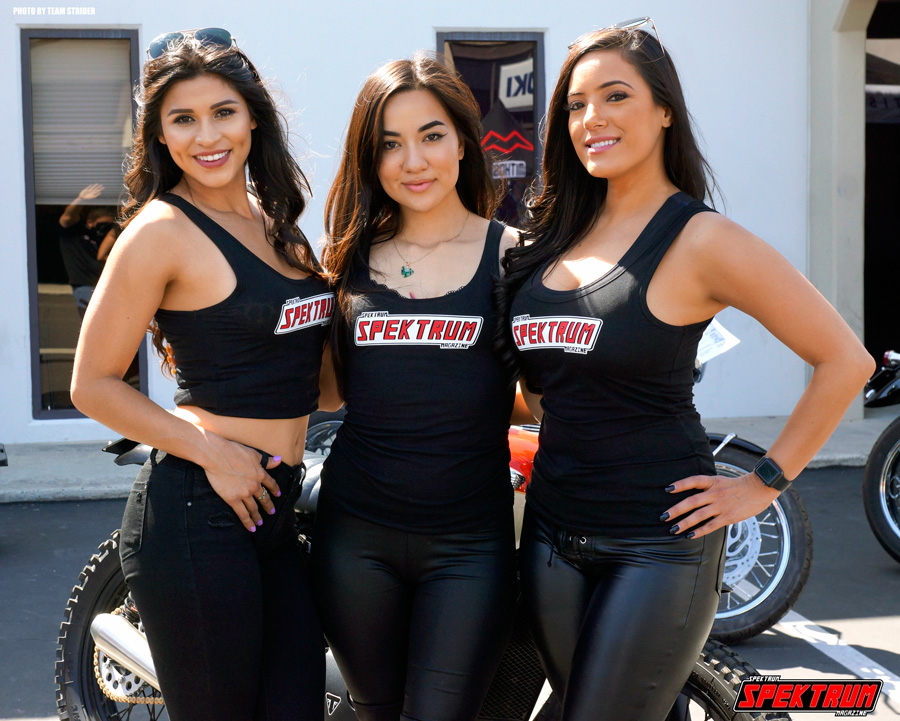 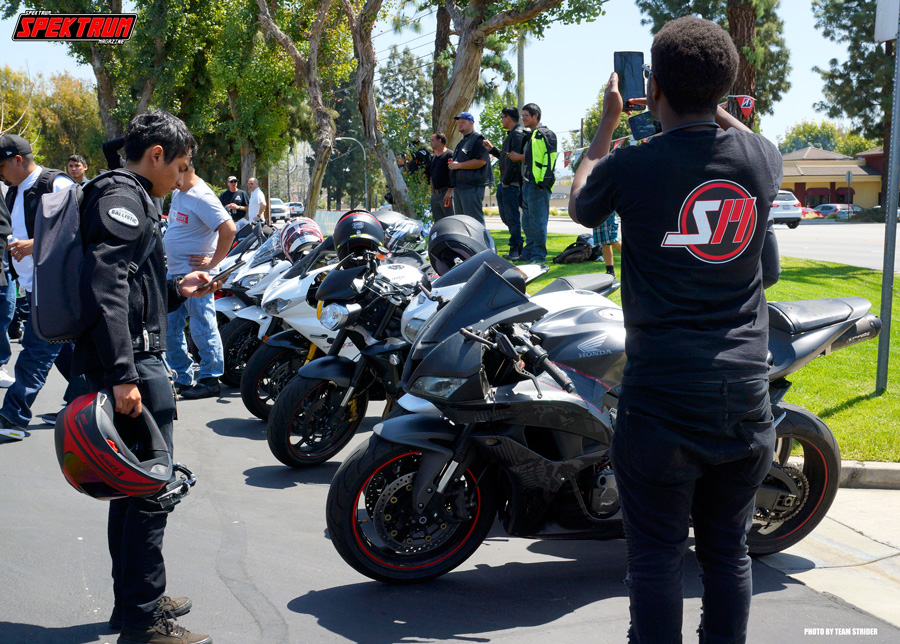 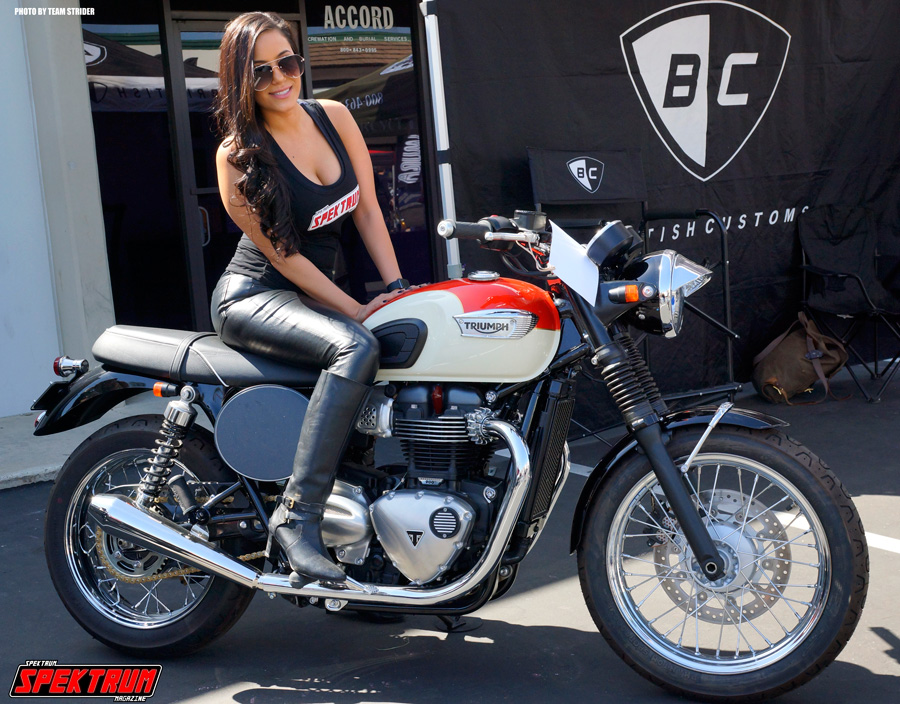 Shanik sitting on this beautiful Triumph from British Customs 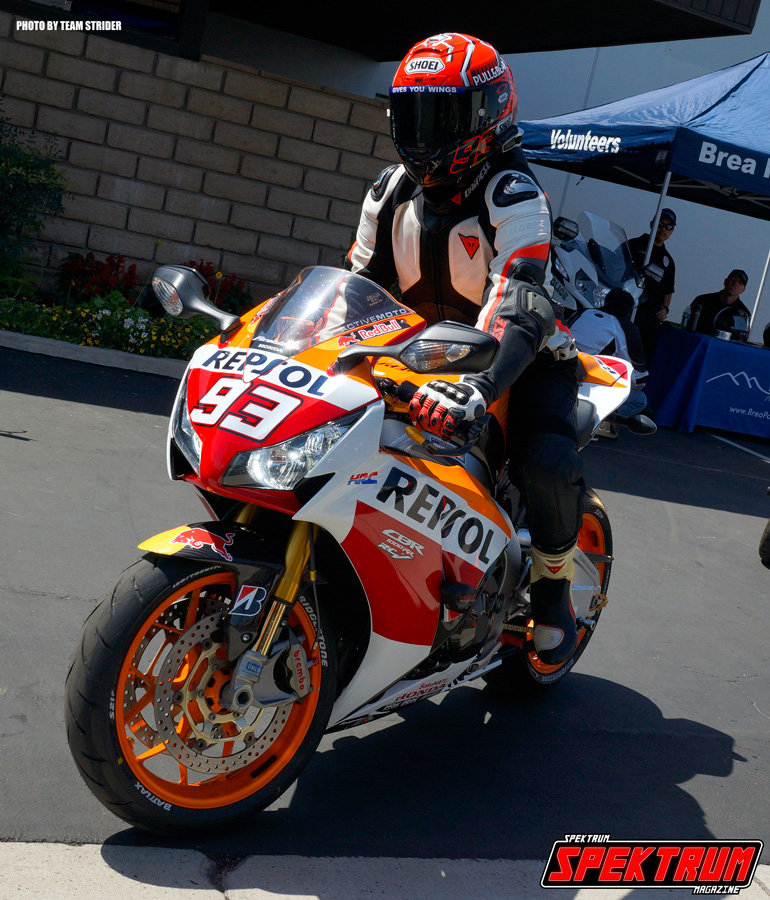 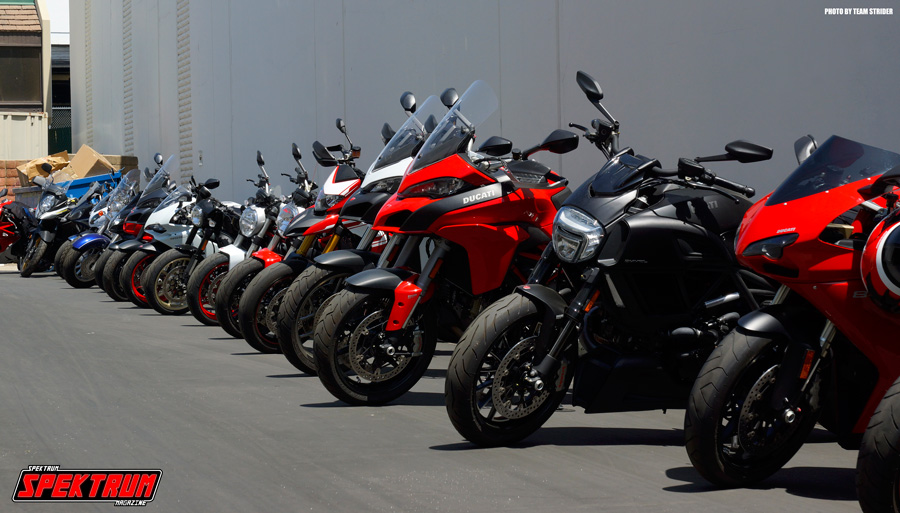 Many, many motorcycles glisten on the sun 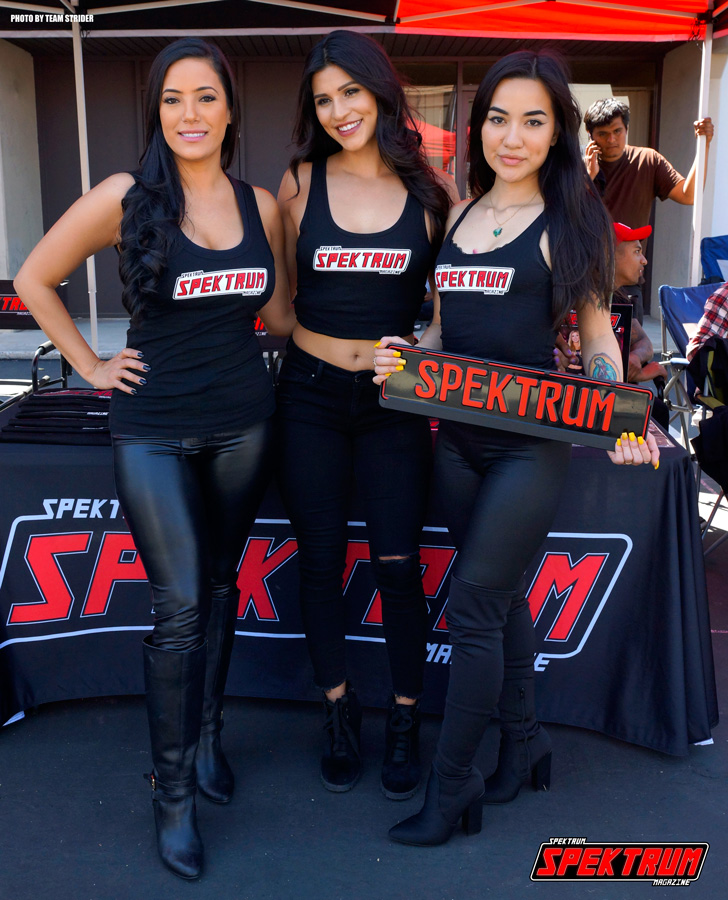 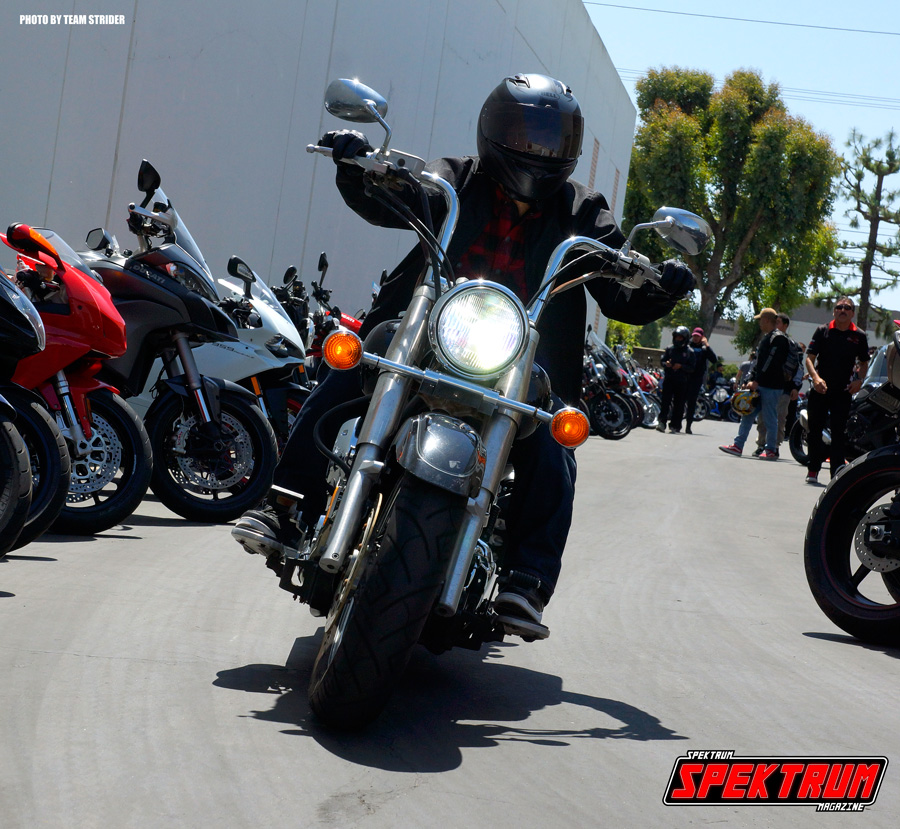 Bikes of all types were at the Brea show 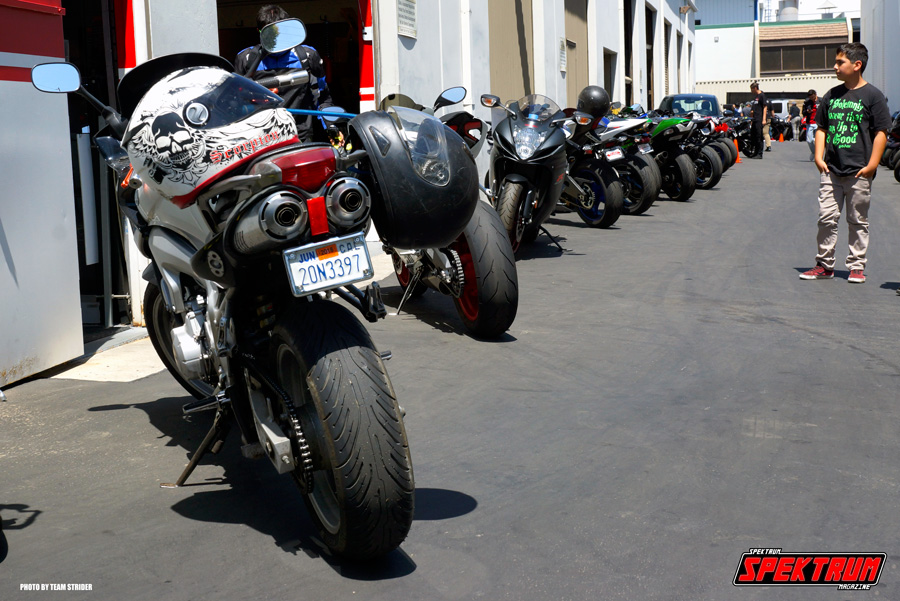 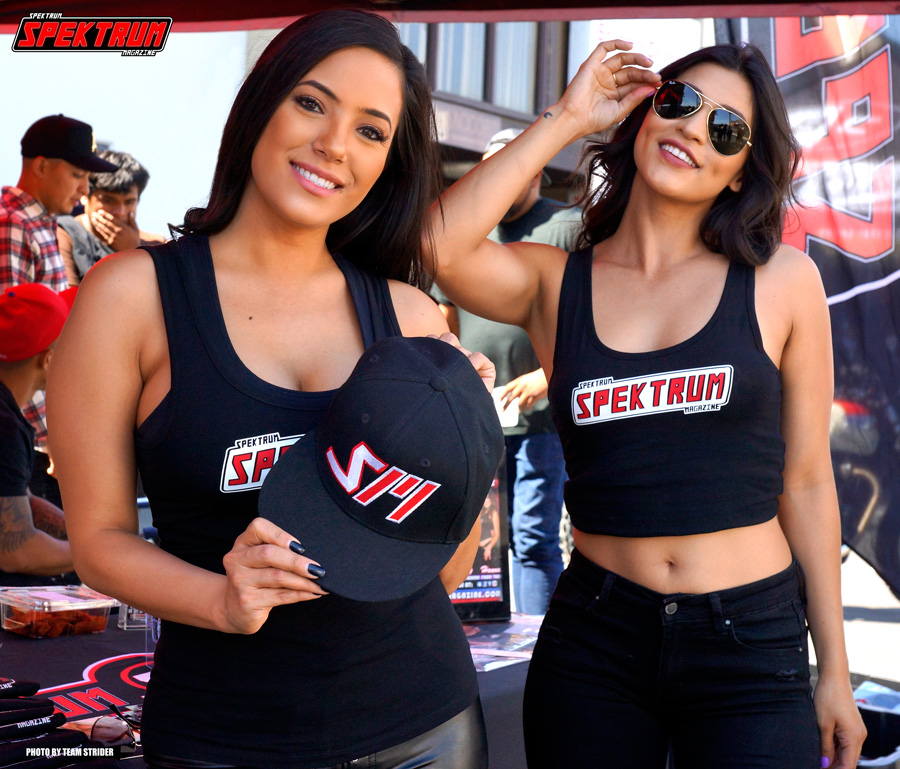 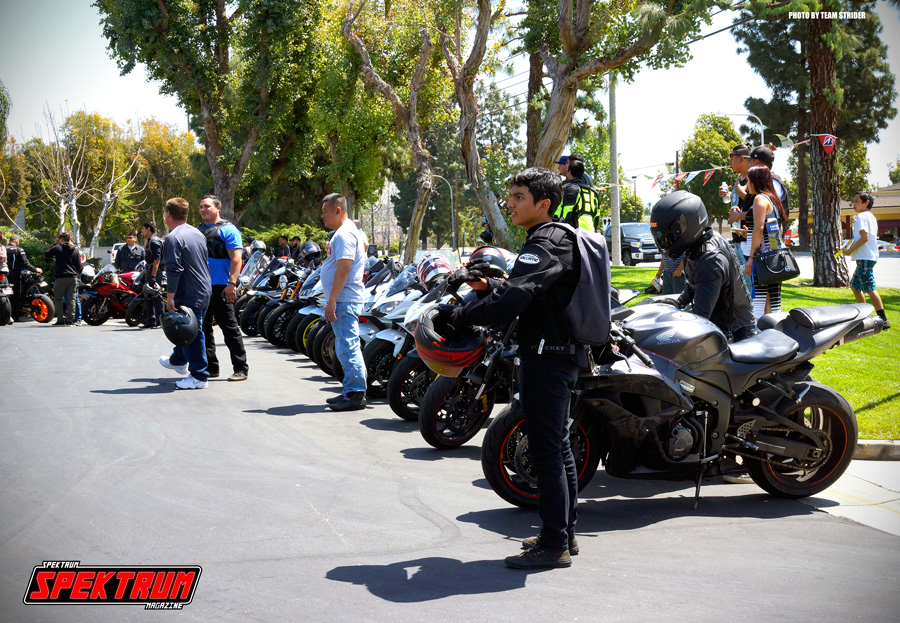 What a nice and sunny day this day really was 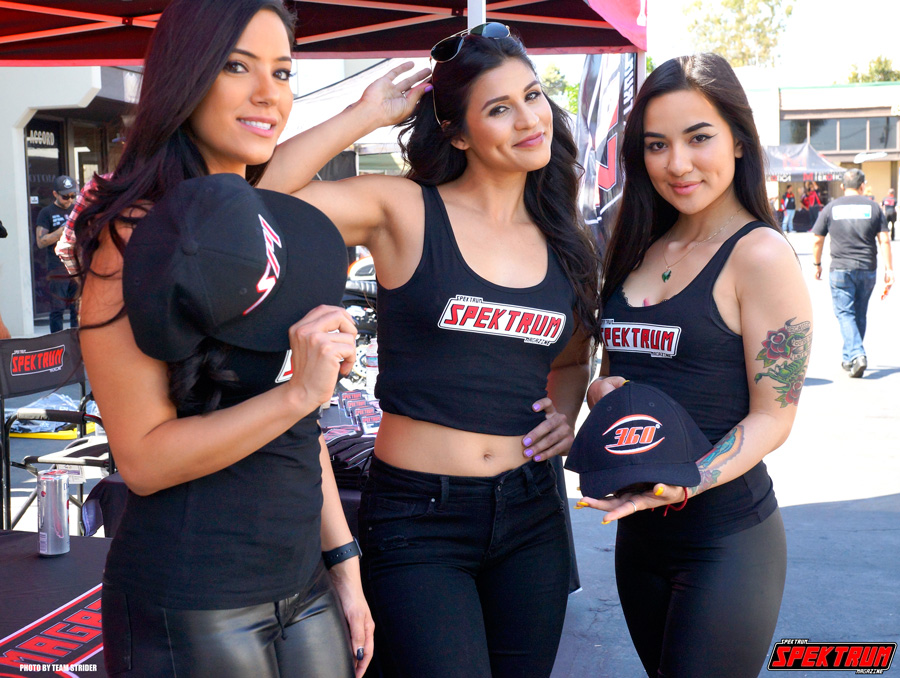 What’s not to love about this crew? 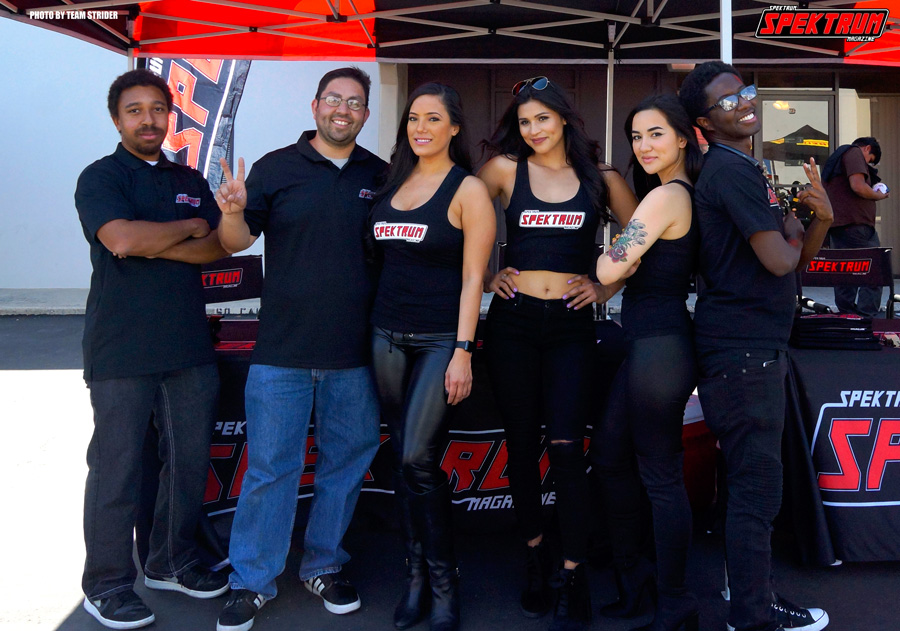 The team from that day. Love this crew 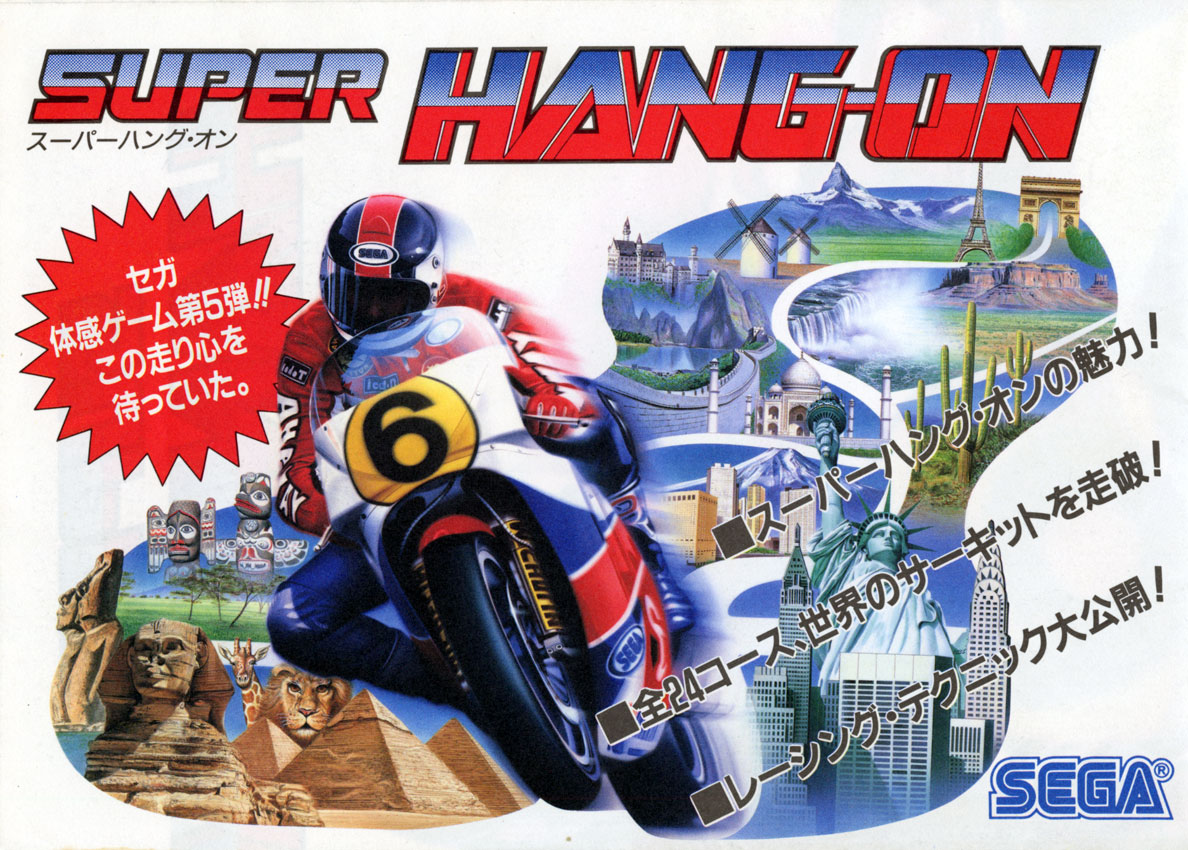 For more information about Southern California Motorcycles Brea and any news or upcoming events, check them out on their website at Brea SoCal Motorcycles 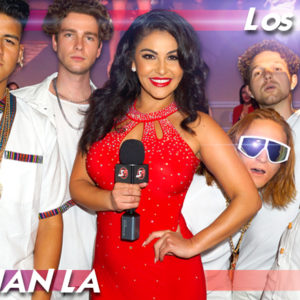 Ever since I was a little kid I had always wondered what beauty pageants were like. I remember it being...