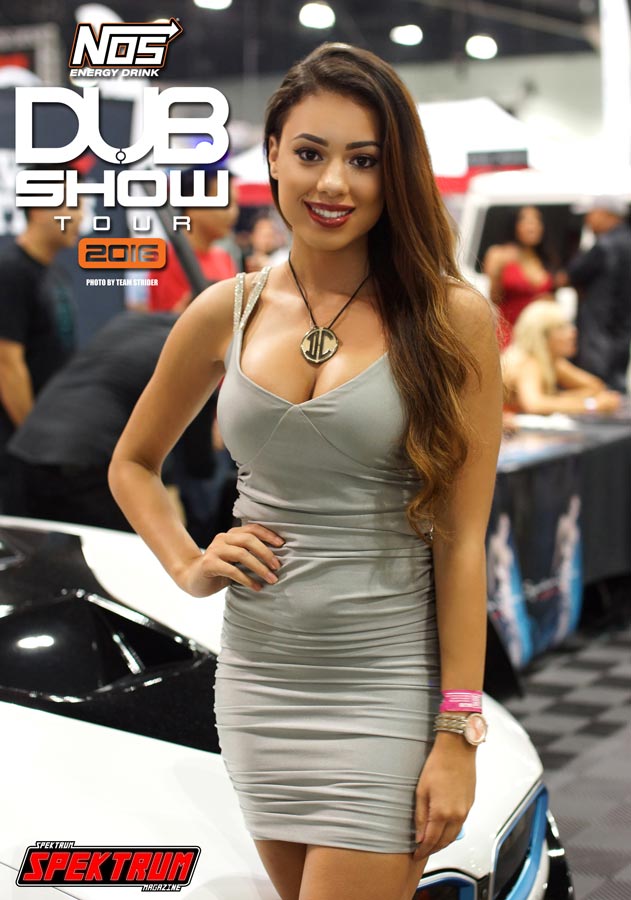 Spokesmodel Kaylie Finch for 2Crave Wheels at The DUB Show

Every once in a while a show comes to town that mixes things up. There are lots of events all throughout the Southern California reason, and events of all types. But, every once in a while there is an event that manages to take the best elements of different genres (whether it be related or otherwise) and mashes them up for the enjoyment of the public. For those of us that go to a variety of carnivals and festivals (as well as any fairs, such as the LA or Orange County Fairs), this would seem pretty normal. But, when it comes to mashing up two very distinct and two very different genres, only one really does it with a style rarely seen anywhere else. The DUB Show, if you’ve never heard of it, is one of those shows that manages to mash up music and cars and throws in everything in between to make something uniquely special. If you could live within a Hip-hop video, then this is what you would get. And, if you didn’t know, it’s pretty awesome.

For the last few years, I have been checking out the DUB Show in Los Angeles. Granted, they do have a DUB Show Tour that has multiple stops around the country, and have even hosted their show in Orange County, but, LA to me has always seemed like the place that should hold this show. I mean, LA is the center for West Coast Hip-Hop, and it’s the logical choice for a location for a show as music oriented as the DUB Show. This year was the sixth year in a row that I was going to the show. I was very excited to see what this year would bring, and while I had been to the show many times over the course of a couple of years, and in different cities, I think there is a real bit of anticipation that comes with seeing what will be there this time around. Would this year bring any new cars and themes to the show that we hadn’t already seen in years past? That’s the question I always ask myself when going to an event I had been to before. This year was no different, and to be honest I wouldn’t have wanted it any other way.

I always get excited when going to the DUB Show. I don’t know whether it’s the fact that I know what I will be seeing, or the fact that I get to see some of my favorite musicians on stage for the first time. But, there is a sense of awe every time I check out the DUB Show. The shows are always on a Sunday, so, if you had already partied it up on a Friday and a Saturday, having the show on Sunday is even more of a reason to keep that party going. The nice thing is, that the show is in the middle of the day and always seems to be pretty relaxed. I think one of the most jarring things for first time attendees would be the people going to the show. This might not make a lot of sense, so, maybe I’ll have to take a moment to explain what I mean actually. It’s not so much that it’s a scary thing, I think it’s a product of that mash-up between music and cars. What I mean is, that the headliners to DUB Show are always big name acts. In past years we’ve had such artists as Kid Ink, Ice Cube, Snoop Dogg and Rick Ross show up to the show. The energy leading up to the show definitely feels like a concert, and it really does come off as one. The headliner for this year was 50 Cent and fellow G-Unit member Lloyd Banks. An impressive feat considering there were several other big artists scheduled to hit the stage right after them. One of those was Fat Joe and Remy Ma. For a one day show and on a Sunday, there’s almost too much high energy to contain, on stage and otherwise. The good thing is, that the choice is truly yours to make. At any point you can see who you want to see, but, you have to be pretty quick on the draw or the area around the stage will fill up fast. 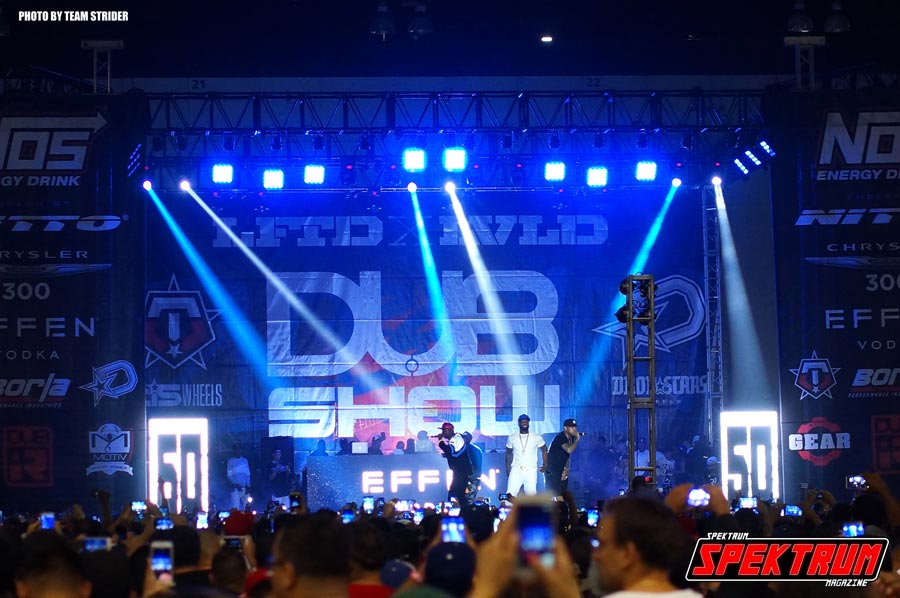 The walk to the Convention Center (the show is usually held at the Los Angeles Convention Center and this year it was back there once again) is just as interesting on the outside as it is on the inside. Every where you look, people are dressed up as though they were going to one of those concerts or to a club. The women put on their best dresses, shoes and outfits with the intent on impressing any and all onlookers, and a lot of the guys are dressed to a ‘T’. For people like myself, it’s actually pretty funny. I don’t know. Maybe it’s because the name tells us that it is a car show first and that the musicians just happen to be on the bill are some big names, but, it definitely makes for an interesting mix of crowds. You have on one side people that are dressed up, ready for the club, and on the other side, people that are interested in the cars and models that are so dressed down, it isn’t even funny. I belong in that second camp of course, but, it always makes me chuckle seeing just how diverse that mix of people is.

One thing that has me smiling every time I go to the DUB Show is the amount of beautiful women that attend the show. I mean, good Lord, it is impressive. As a single guy, I, of course can’t help but look at all of the women at every show. It’s hard not to when that is one of the things I just happen to cover at shows. I know it’s a bit of a taboo subject to talk about, especially for someone commenting on something that has very little to do with. But, the truth is, the women of the DUB Show is as much a part of the show as the cars themselves. The focus is always the cars and the products that they are there to promote. But, from time to time we do see some of the vendors bring out some  big names in the hope that they will help to elevate their brand. One of our team members Hanna was working for a wheel vendor named Asanti Wheels. While Hanna was one of the main models there in support of the brand, there was also a VIP guest that was there to draw in bigger crowds than usual. Her name is Brittanya and if you had never heard or seen her before, you are sure to be amazed. While she may not be my personal cup of tea, its hard not to be drawn to her appeal. With more curves than the Laguna Seca track, and a look that can make most grown men weep, Brittanya is a force of nature, and one that single-handedly brought in a load of attention to the booth. Asanti sure knew what the crowd was looking for, and they certainly delivered on all fronts. It also helped that you had many other VIP’s and beautiful, young people at every vendor booth and attraction. The audience sure had a large amount of things to see and people to meet before and after the concert(s) had subsided. 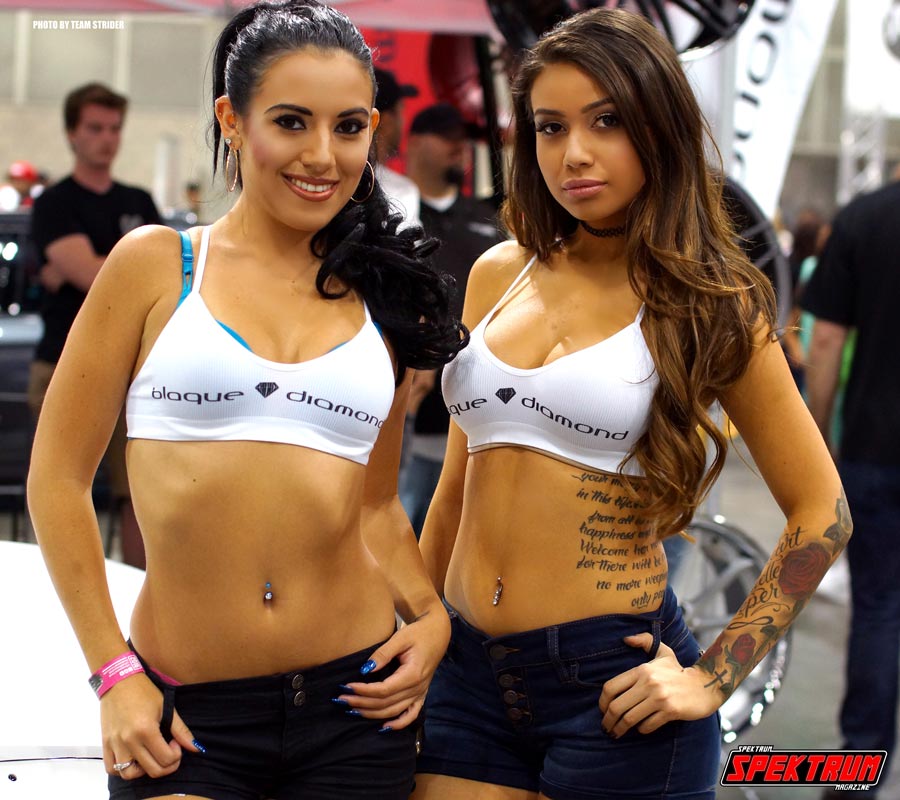 The beautiful models of Blaque Diamond Wheels (Amber and Byanka) 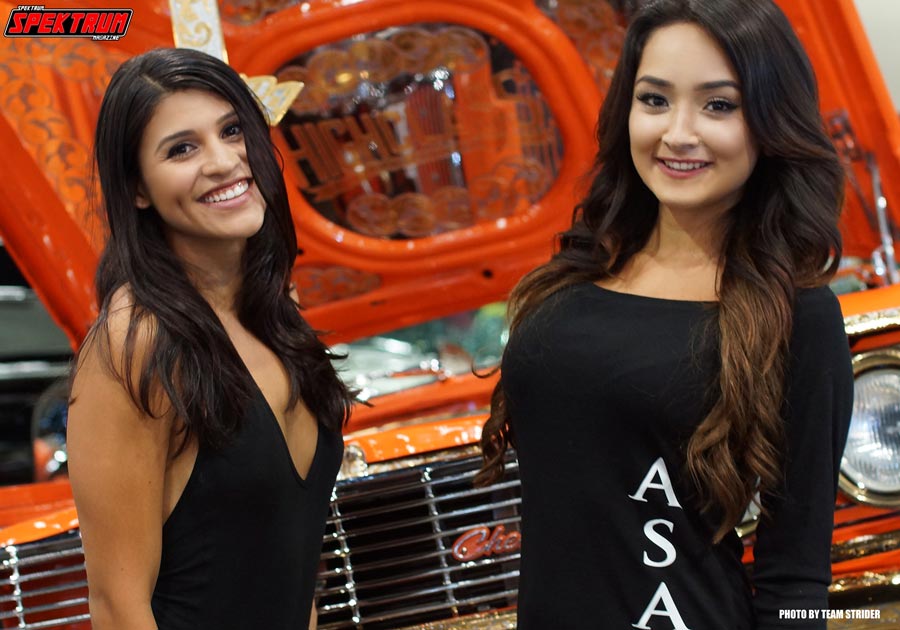 Our very own Ily and Hanna smiling for the cameras

But, maybe that is why the DUB Show is just so immensely popular. You have people coming in from all over the place and from all different walks of life ready to experience the lifestyle and culture expo that the DUB Show is. Some of the most amazing cars also make the trek, and it is indeed very impressive to see. While the scene has been more known to feature classic cars such as lowriders and old school bombs, there has been a real push in the last few years to introduce exotic and luxury cars into the mix. Needless to say, the extra cars has proven to be extremely popular, and it also helps to add to the atmosphere of the hip-hop lifestyle. I am sure a lot of the people that went in primarily for the car show sure do welcome seeing the extremely rare, exotic and expensive cars in the world. The DUB Show is a show with a wide range of appeal, and every year since I had began to attend (and I am sure it was the same before) has grown to an even bigger event. I sure love the show, and I am sure I will continue to do so rolling into the 2017 season. Unless DUB somehow stops bringing in the the big name acts and gorgeous women, there’s no reason to thing that this show will be anything less. 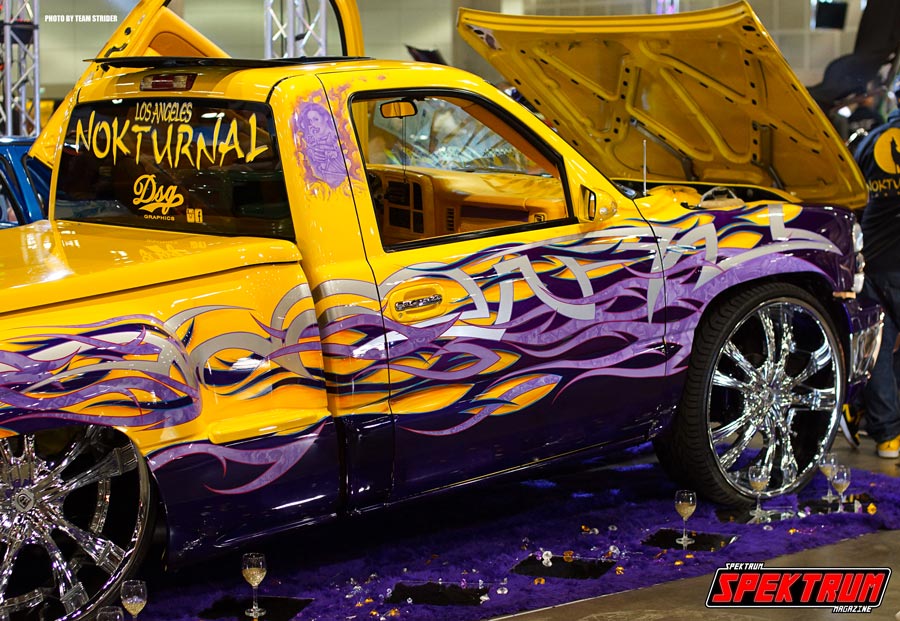 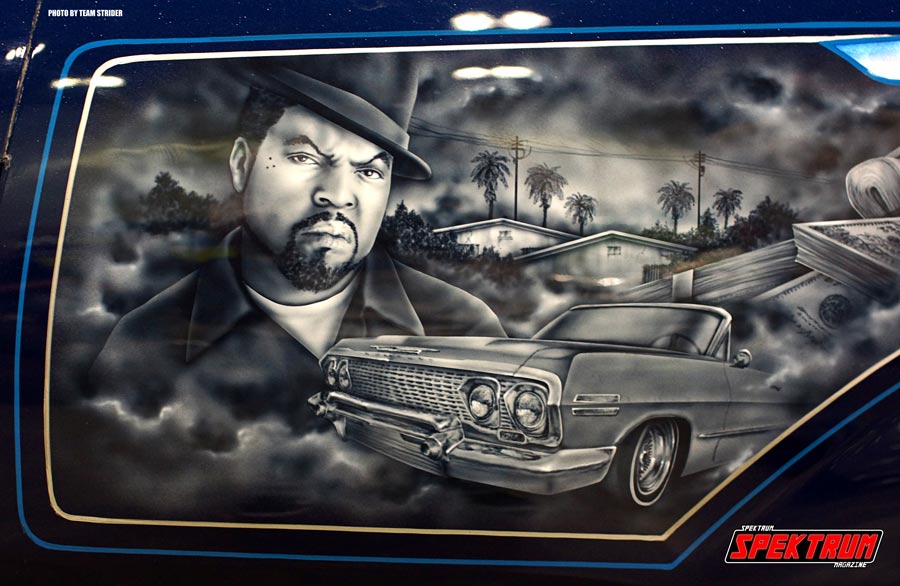 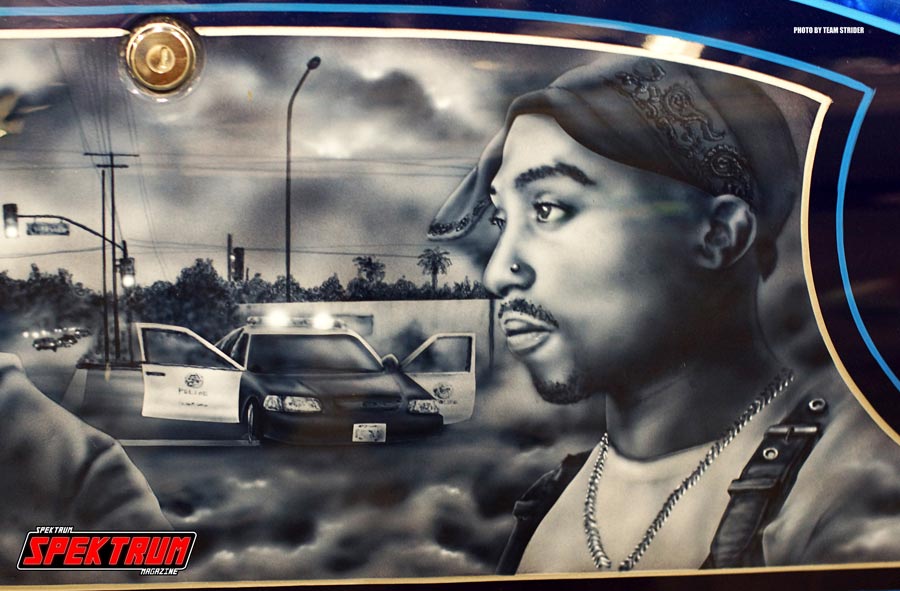 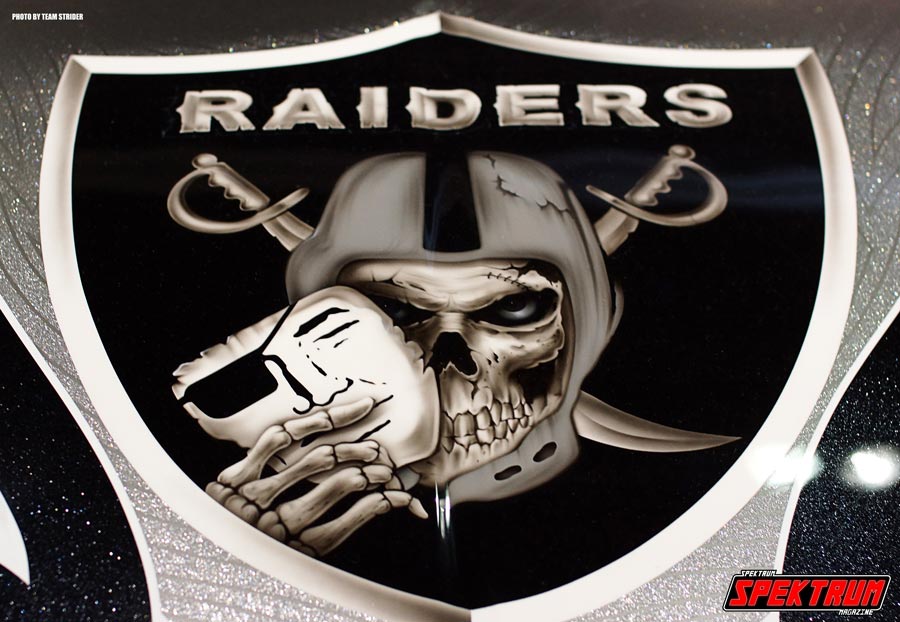 Check out this Raiders-inspired airbrush work at the DUB Show 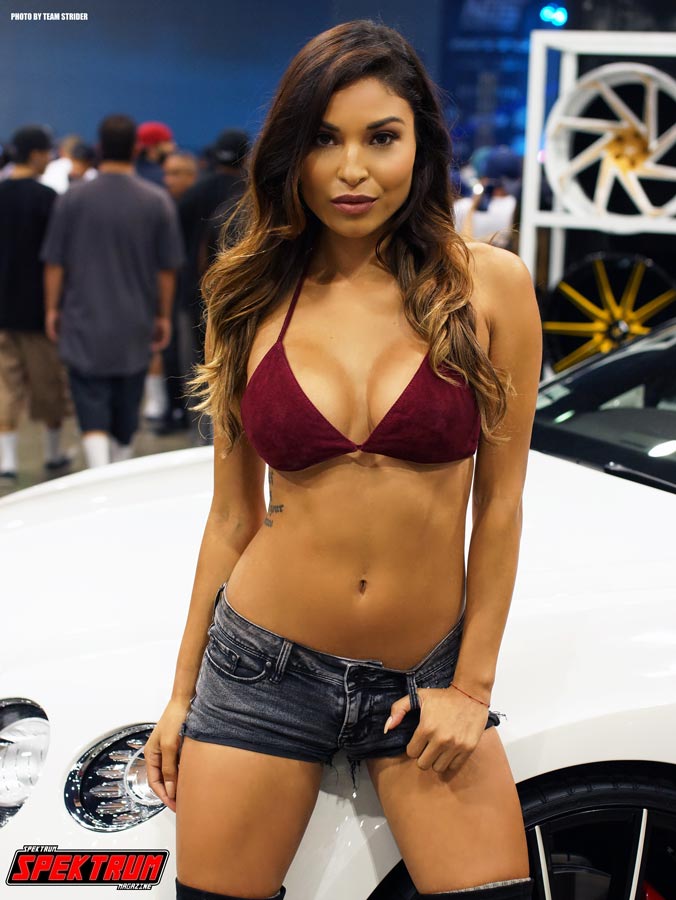 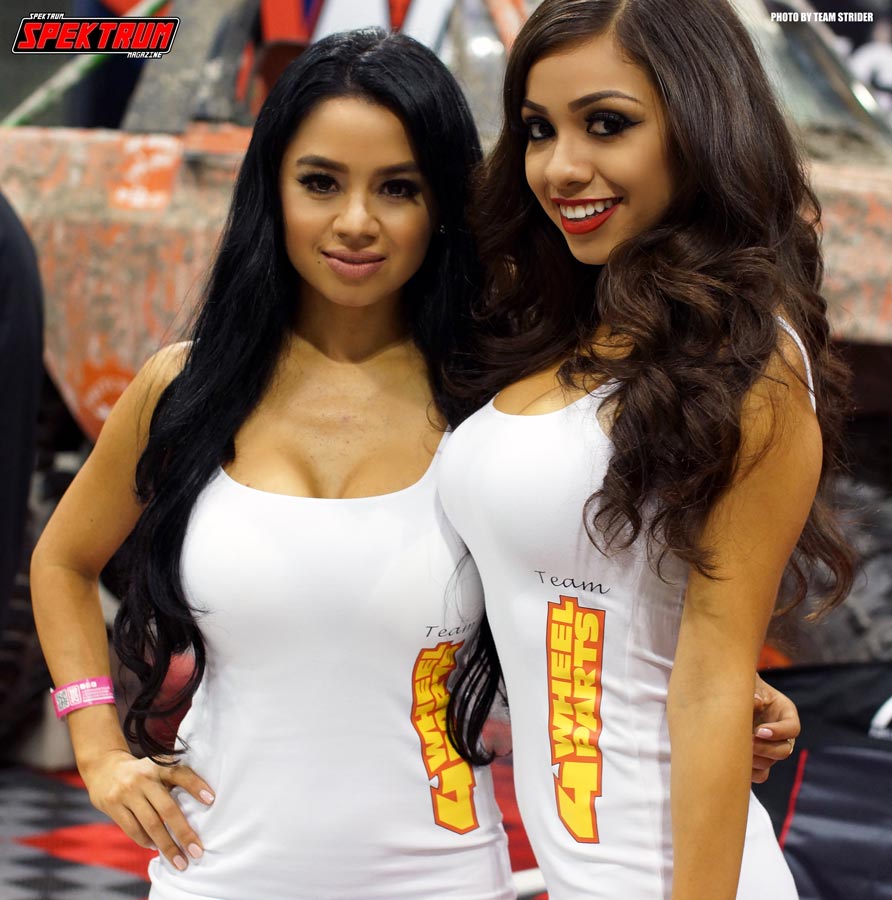 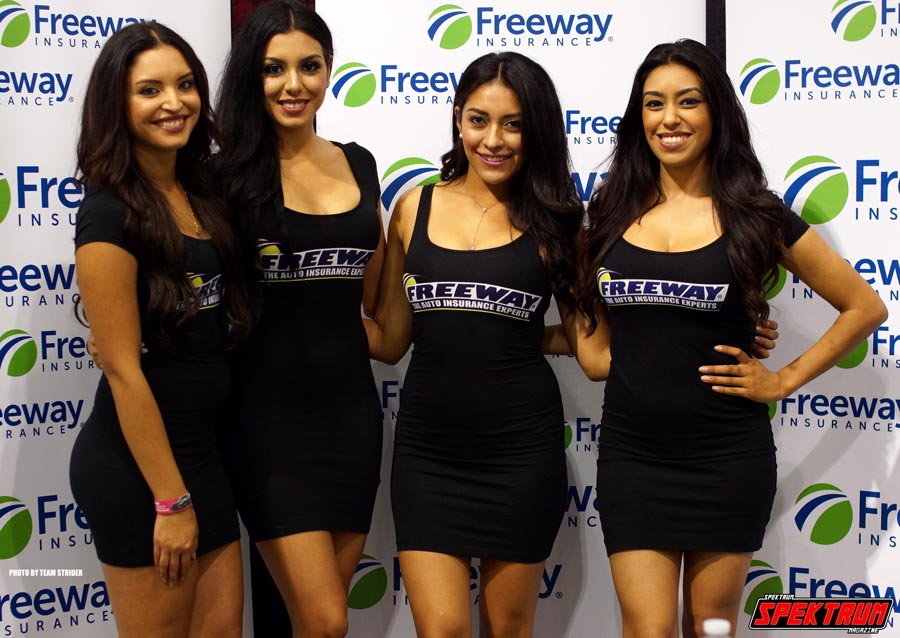 The promotional models of Freeway Insurance 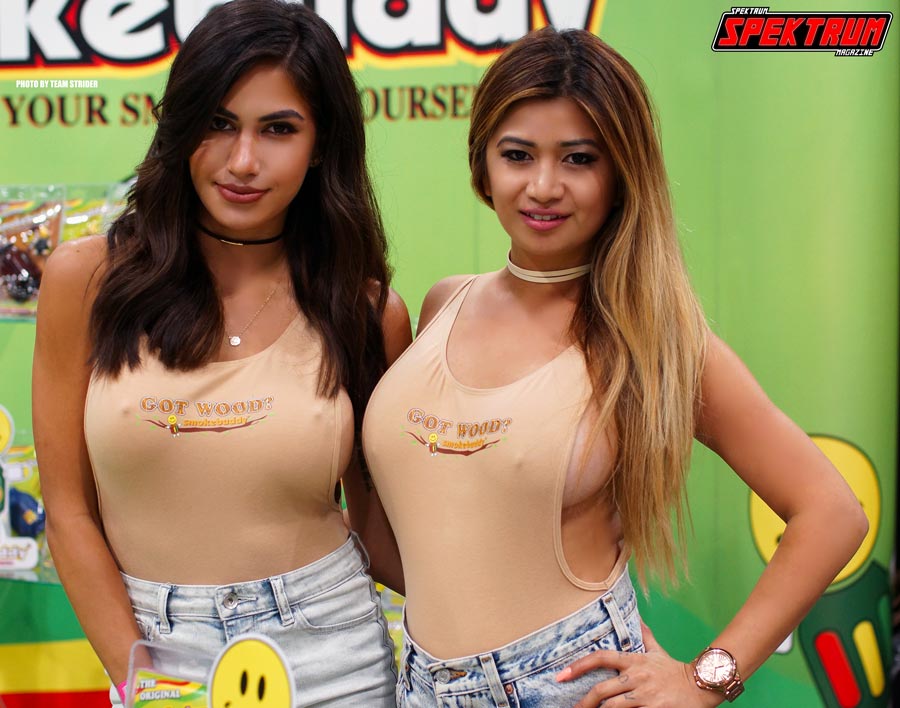 Some promotional models for Smoke Buddy 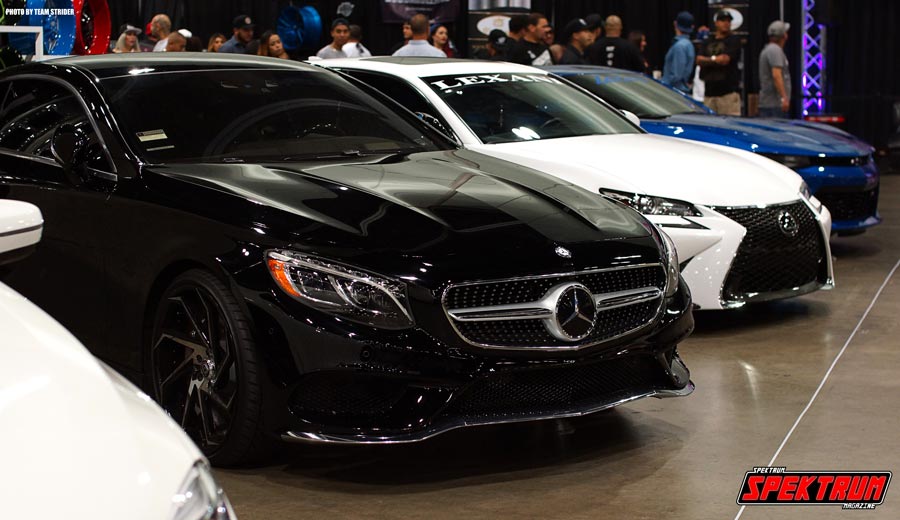 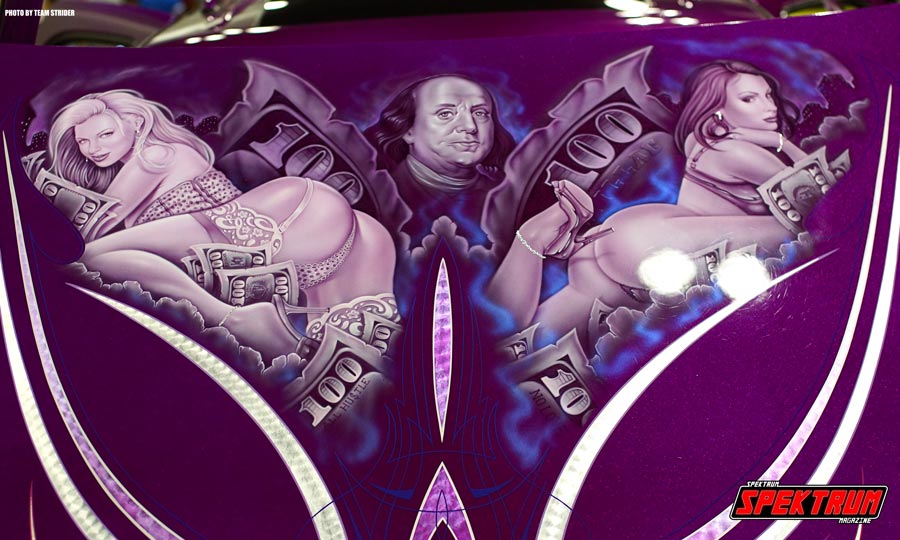 Benjamin Franklin in his own crazy artwork 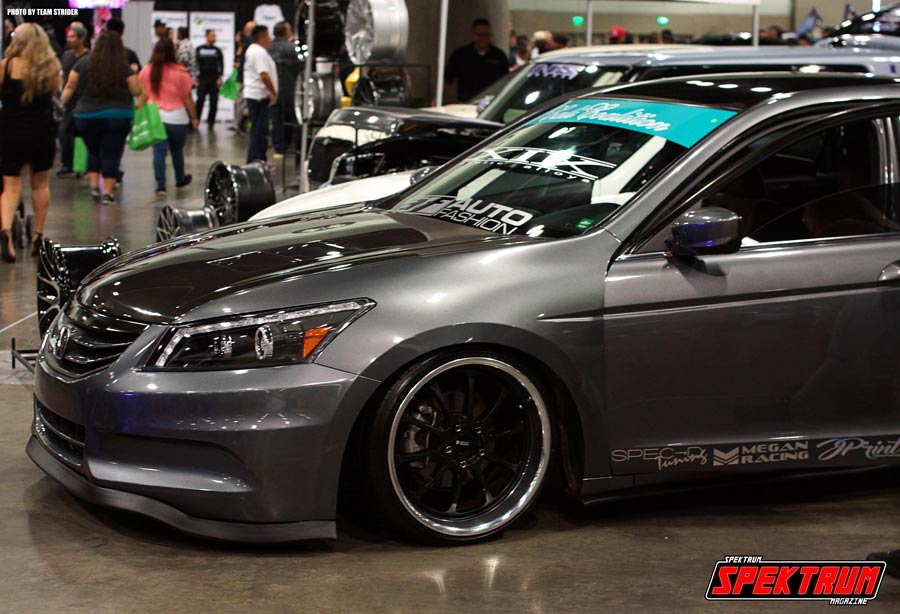 Even some imports made it to the DUB Show 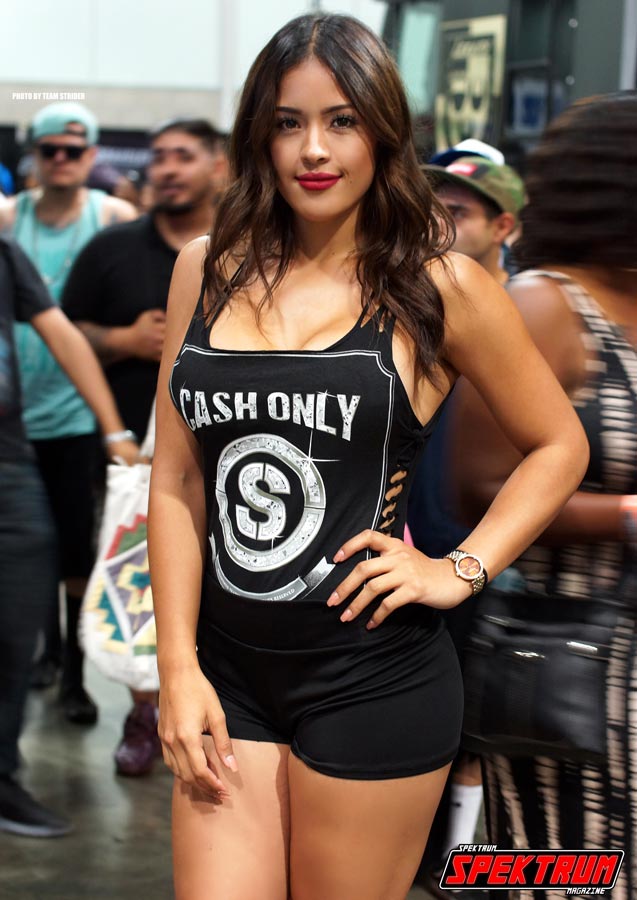 Gorgeous model for Cash Only 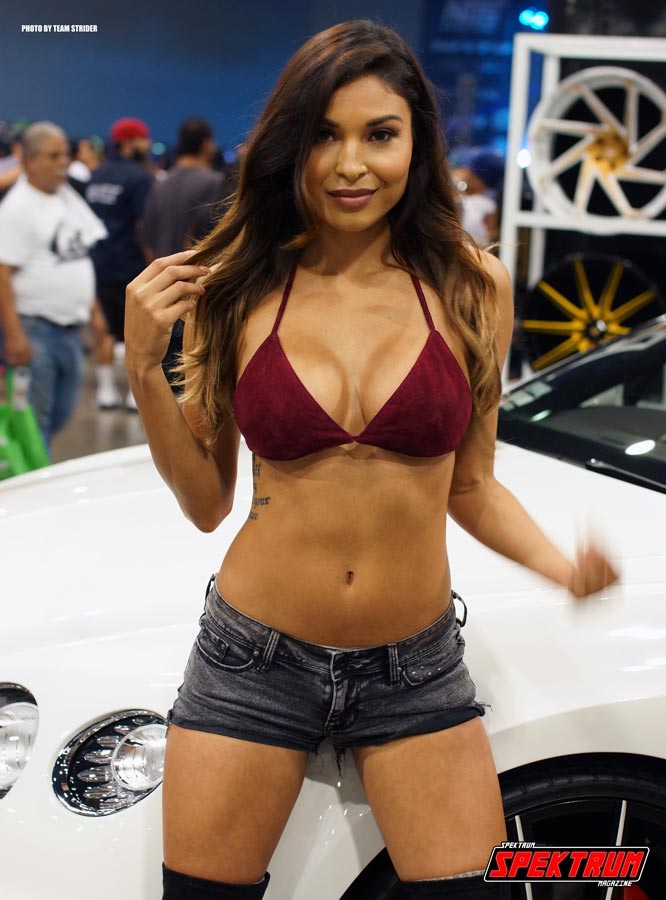 One more shot of Lexani Wheels model at the DUB Show 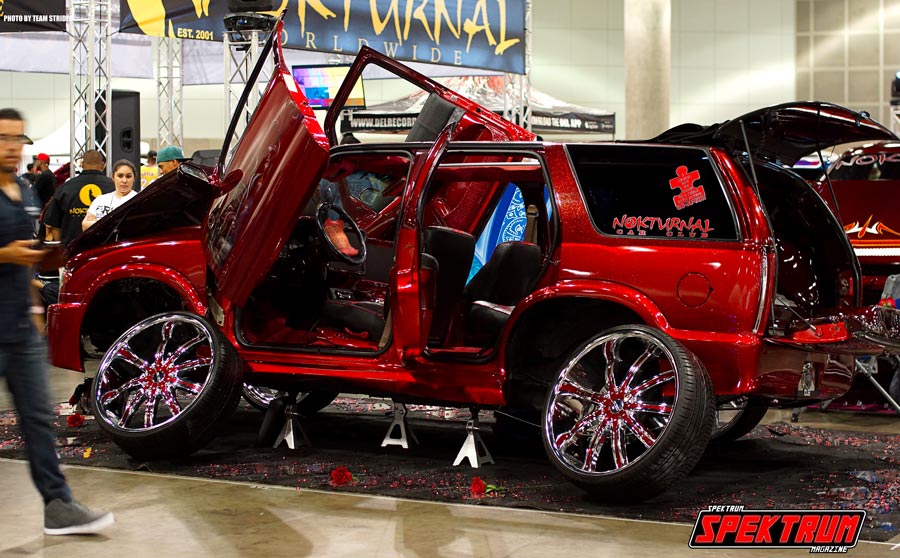 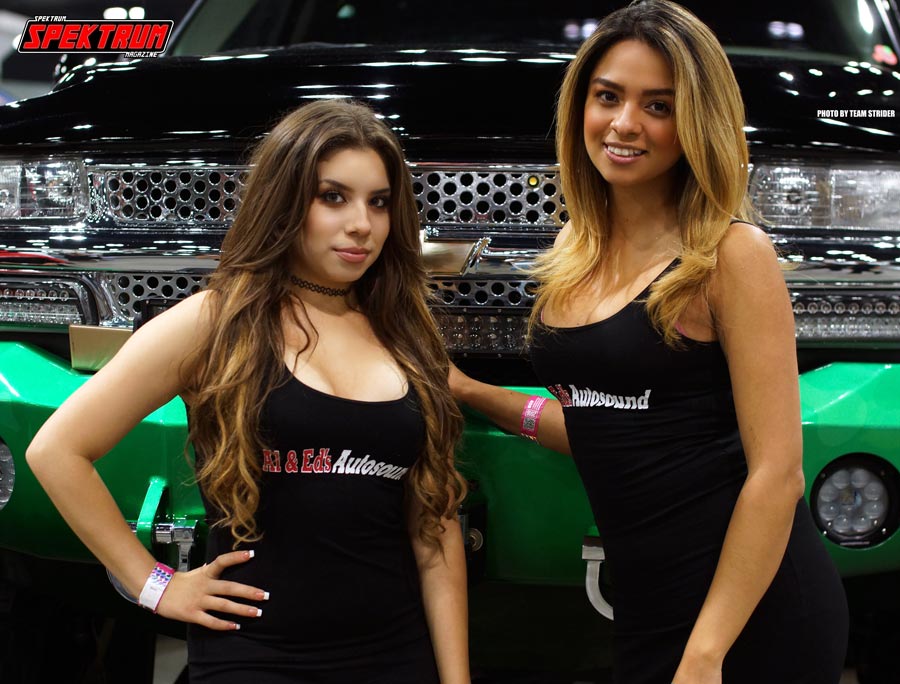 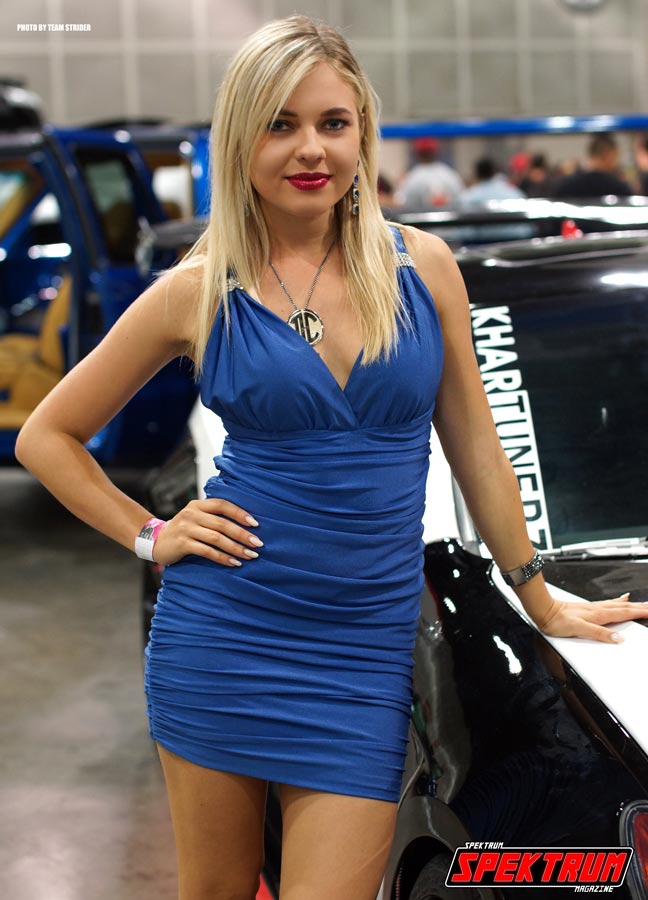 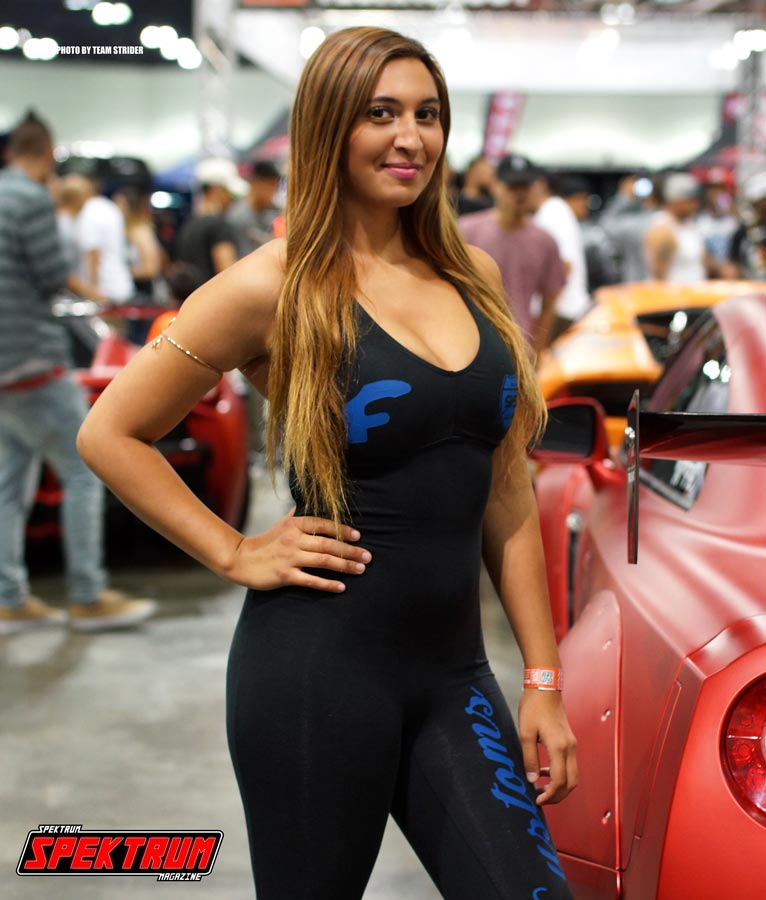 For more information on the DUB Show and the DUB Show Tour check out their website at http://www.dubshowtour.com/dst/

Christmas in the Land of Glitz and Glamour : The Hollywood Christmas Parade 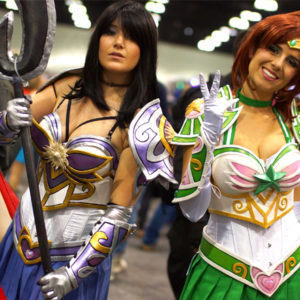