I remember growing up watching my dad work on his cars, but not just any type of cars, Nissan Datsuns to be exact. He used to love to collect those cars like no other car existed to him. It would always put the biggest smile on his face driving around town making people observe these beautiful cars that he cared so much about. The facial expressions that we would get from other drivers on the road were so priceless. Maybe it’s because people didn’t really see those cars around, or maybe it was because he would always deck them out with bright colors and cool sound systems.

Here is a photo of my sister and I, I believe I was 5 years old, that would have been 20 years ago, year 1999, and in the back you can spot my dad inside one of his Datsun cars that he had at that time. I am almost certain that this was his favorite one out of the 4 or 5 Datsun cars and trucks that he owned. He would drive this one the most and he always seemed happiest in this white Datsun.

I remember at that age feeling a little embarrassed to be seen in one of those cars, if only I knew then what I know now about life. About how much I should have appreciated that we even had a car. I was a little 5-year old girl and I didn’t understand much about life at the time. I would hear my friends making fun of me and they would tell me what they considered cool, but as I got older I realized that we did have cool cars, the classic cool cars.

I really wish I had more photos of the other cars, but just to put a visual for you, my dad had different types of Datsuns. He had some that were coupe, 4-door, automatic, manual, even Datsun trucks, and they were all from different years and styles, and he drove each one on a different weekend.

This is where life did a full circle on me.

Little did I know that a couple years later (about 10 years later) that my first car would be a 1979 Nissan Datsun B210.

Phew, did that car make heads turn! People would see me driving down the freeway, and they would nod their heads at me, to put it simply, I felt very cool.

Here is a photo of the gem I owned, a 1979, manual transmission coupe with a blue interior to match the exterior. And here’s the best part, it had house speakers inside to bump my music.

The funny thing is that many people would call me ‘Barbie’, because I was this tall and skinny girl and the car had this baby blue color, so I mean, let’s be honest here, it makes sense. I remember the car was given to me as a gift on my 16th birthday and I was so excited because I finally had my own car and I could ride that in the streets. But I was more excited because this classic car pushed me to obtain my driver’s license at the age of 16 in a half.

It was a very exciting time of my life, and at the same time there were moments that I cannot forget that I experienced when having and owning that car. Like the time I was driving to my ex-boyfriends house about 30 miles away and the engine caught water inside and stopped working mid-drive, or the time that my clutch went out and I was left stranded, or that one time I ditched high school and the school cop found me because I mean who doesn’t notice a blue car with barbie driving inside of it??

Also, the car wouldn’t drive past a certain MPH range while driving uphill, it would go soooooo slow that people would pass me and sometimes flip me off because of how slow my car would go, and let me tell you it was funny because I didn’t have tinted windows and all you could see was this little girl driving about 40 MPH on the freeway with gloves and a beanie, because I also forgot to mention, I did not have air-conditioning or a heater. I think I even got frostbite once!!! Hahaha just kidding! But, it was very cold and very hot in the seasons for sure.

Overall I also had a lot of wonderful memories in that car. My dad used to teach me how to change my own oil, tires, sparkplugs, engine filter, and so much more. Back in the day cars would be so easy to work on! Nowadays I open the front of the car and I just close it right back, it looks so robotic and complex for me, so I leave it to the professionals.

Now, this is the part where the journey of my Datsun ended. Fast forward 4 years, the car was sold. I know I know, I should have kept it! It was a classic!

But at the time I worked a distance away from home and I needed something more reliable and not something that would leave me stranded every now and then, but now thinking back, I kinda wish I would’ve just kept it as a weekend car or something. We did sell it to a family friend, so hey who knows, I may consider repurchasing it! That would be pretty cool don’t you think?

As the years passed by, my dad would slowly get rid of each Datsun car or truck that he owned. I forgot to mention that my Datsun was the last one kept in the family line, so after I sold it, it was pretty much the end of the Datsun phase for us. He sold a few and he gave one to each of my sisters and I. My eldest sister had a dark grey 80’s 4-door automatic, my other sister owned a white one, and let me tell you that girl would SPEED in that car, I would hear stories of her busting the high 90’s on the freeway. Man, if only I had owned the fast one, you would have seen me racing every car in sight. My dad was very nice to have passed them down to the family, and I am very grateful.

Overall it was an awesome experience to watch my dad with these cars, it was pretty cool being able to experience this growing up, especially since nowadays cars are so much more evolved, and I am grateful to have learned so much about classic cars during my childhood years. Not to mention, my high school friends always remember me for dropping them off home after school in a blue Datsun, and until this day, they wonder if I had subs in the car (I never told them that they were house speakers), lol. They don’t need to know!

Next time you see a Datsun car on the road you might remember this story, and if you do see one, let me know because I’ll be interested in purchasing it. Until then, we will let the Datsun memories live, because you never know, the Datsuns may make their big return.

This article was prepared or accomplished by Angel Munoz & in her personal capacity. The opinions expressed in this article are the author’s own and do not necessarily reflect the views of Spektrum Magazine, or its affiliates. 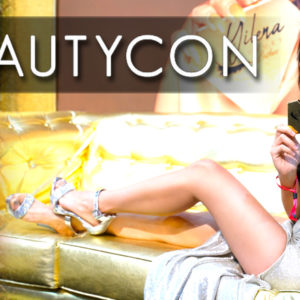 BeautyCon 2019   So, just how exciting is it to attend one of the world’s largest beauty events? The Beautycon...