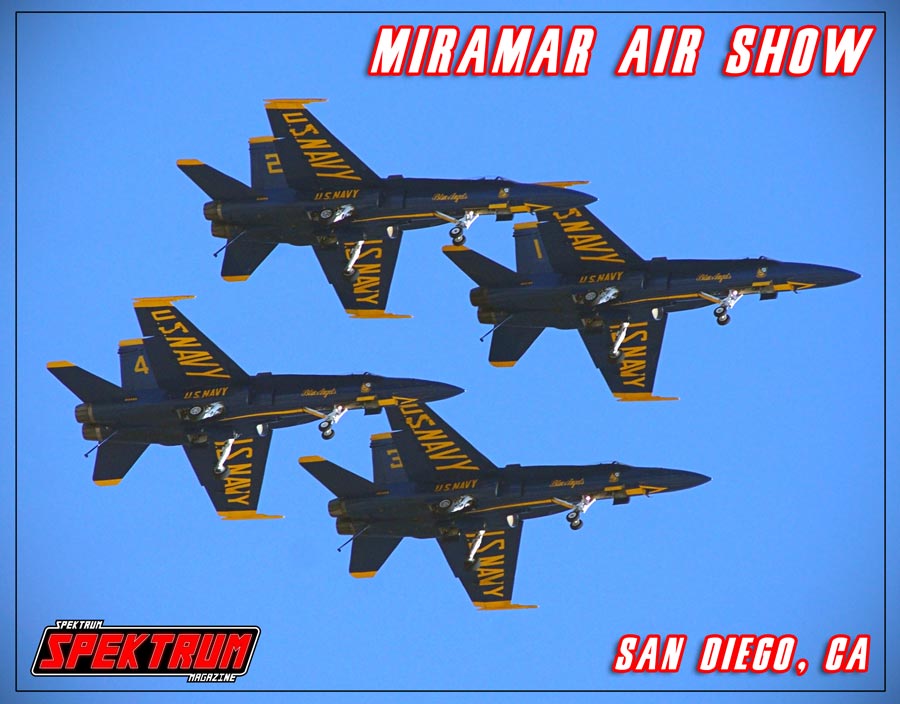 One of the shows I look forward to every year is the Miramar Air Show. Ever since I was a kid I can remember waking up on a Saturday and heading down south. Growing up in LA, the drive to San Diego seemed like it was so far away. At just over one hundred miles from LA it was a big deal back then. At least to me. Just walking down the block seemed like a trek across the continent way back when. As a little kid growing up in the 90’s it was hard to give up a weekend of Ninja Turtles and Fruity Pebbles cereal for anything. While it was a bit of a disappointment having to wake up early on a non-school day and leave home, it wasn’t until we arrived at Miramar and I looked up into that sky that all my worries disappeared. All the complaining and all the negative feelings were completely wiped away after arriving there. It was so cool, and nothing would have prepared me for what I was going to see.  Needless to say, those negative feelings were from my first trip down there. All it took was that one time to change my perception of air shows.

You see, my dad was a big military buff. He used to build model airplanes and watch any movies or television that had to do with the military. I can honestly remember being excited to watch a show called ‘Firepower‘ on the Discovery Channel every week. At the time Top Gun was one of my favorite films, so, seeing what the real stories behind these aircraft was just as thrilling. Seeing my dad be excited about all of that was enough to make me interested in the military. It was aircraft though, that captured my imagination, and it was those episodes of ‘Firepower’ that featured airplanes that were my favorite. So, when my dad asked if i wanted to go to an air show, I was ecstatic. If you ever had ever had the opportunity to go to an event that features car racing or an air show, you’ll know that the experience in person pales in comparison to anything you could  see secondhand. This is supremely evident at an air show, and I would have never known had my dad never taken me. 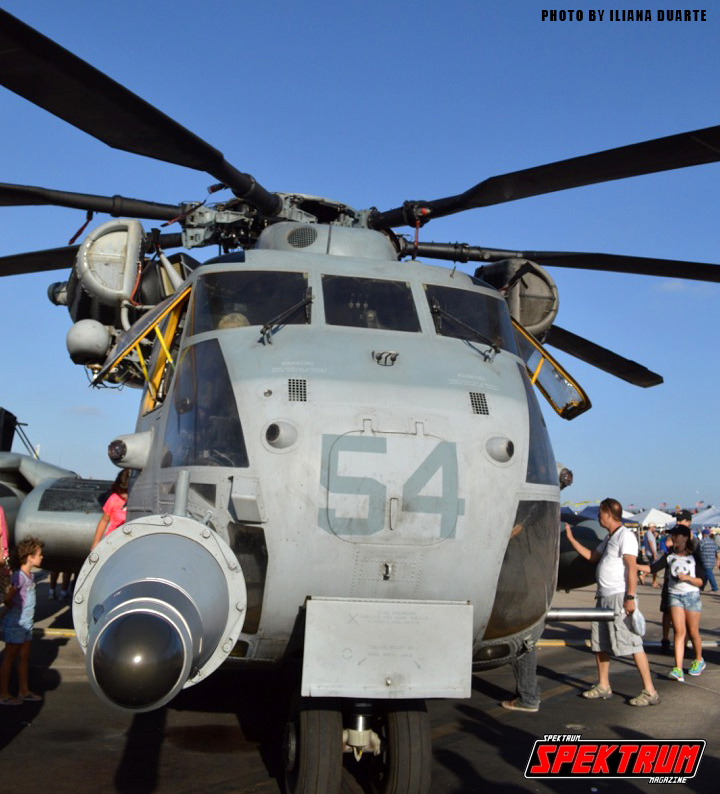 The Sea Stallion looking impressive on the ramp at Miramar

That left quite an impression on me. To this day there are two memories that have been burned into my brain. The first was seeing an AV-8B Harrier hover in place. One of the most bone-chattering, high pitched sounds you will ever hear, the wail of the Harrier stops everything in the range of the air show. When that Rolls-Royce engine spools up and that plane takes off everything on the flightline stops. It isn’t every day that one gets to see an aircraft hover in place, but, for that moment, we are lucky enough to witness that very thing and it is indeed impressive. That sound prevents folks from talking to each other and from a lot of things happening. It almost begs everyone to look at it.

The second image I have burned into memory is another one that I can never forget. It was the sight of the Blue Angels flying. The sight of six F-18 Hornets painted in both blue and yellow is one of the most beautiful sights ever. That look of them all lined up on the runway makes them the star of the show. I remember when I was in kindergarten and my dad had built a Revell Model of a Blue Angel. That color, that plane, just the image of them was so amazing, that I couldn’t wait to see them in person. They say to never meet your heroes, lest you be disappointed, but, in this case it was far from it. To have finally seen the Blue Angels fly (and as the finale to the show no less),  was just fantastic. The grace and finesse that the pilots exhibit while flying these aircraft is stunning. If seeing them doesn’t get your juices flowing, you’re probably in a state of cardiac arrest. But yeah, those moments were just extraordinary. Thankfully though, even after all this time, those two events are still happening and even bigger than before. 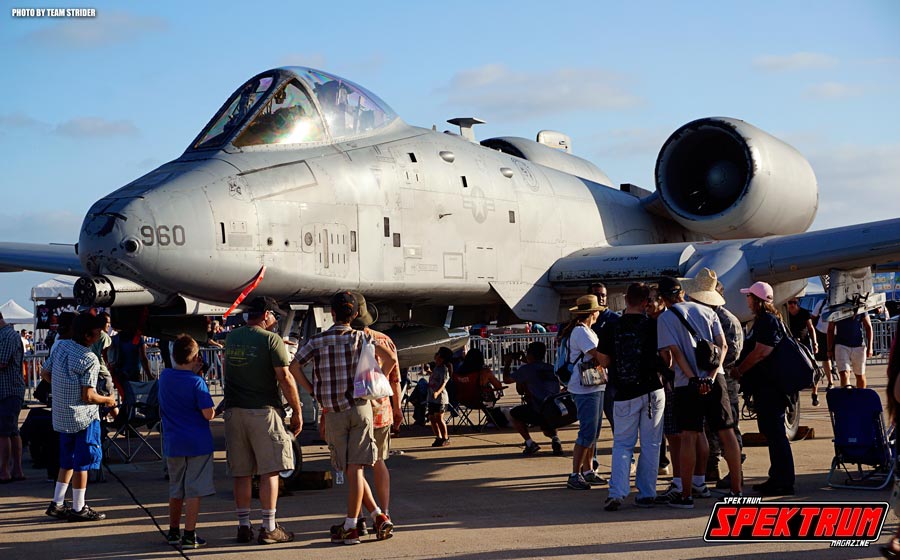 The legendary A-10 Warthog at Miramar

Over twenty years later, the Miramar Air Show is still going and still making people’s heads look to the skies. Miramar might not be the home of Top Gun (the school) like it was when I was younger, but, it is definitely still Fighter Town. With numerous aircraft squadrons and Marine units stationed there, this base is one of the most exciting real estate sites to step upon. With aircraft at nearly every inch of that massive Air Station runway, the stage for the 2016 Miramar Air Show was set. Just driving up to the base brings back a flood of emotions. Sadly, I wasn’t with my dad to see this last show, but, I am sure that he would have enjoyed it. Besides my dad and the lack of (F-14) Tomcats (the aircraft sadly were retired back in 2006), this show was just like the old ones, but with a lot newer coat of paint. It seems for that weekend in October the weather is always perfect and the enthusiasm surrounding the show is through the roof. You can really see it in people’s faces just coming onto the flightline. 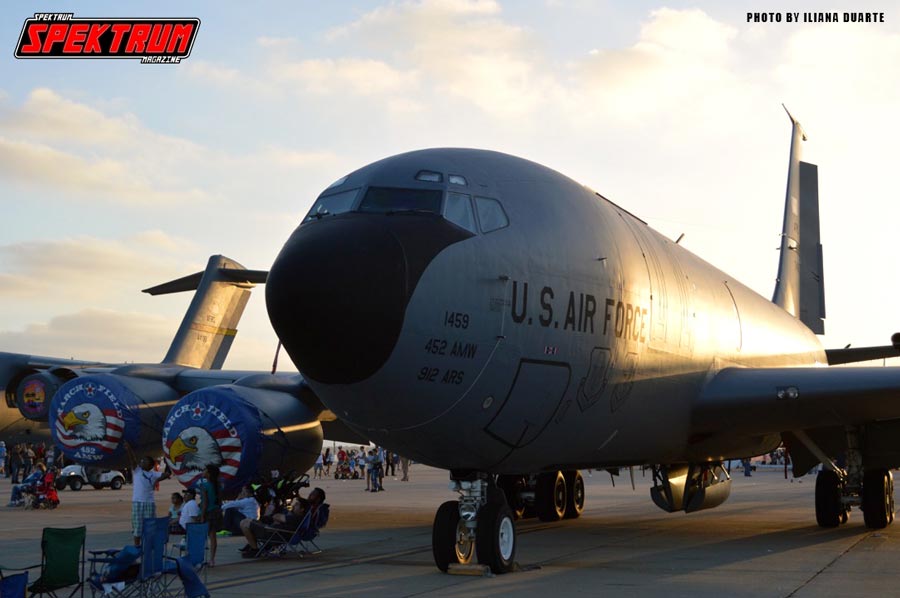 The workhorse of the Air Force, the KC-135

While the headlining Blue Angels were the main attraction, there was plenty to see. Several civilian pilots tear up the sky in their acrobatic planes. Those planes by the way while not the most visibly impressive aircraft at the air show, throw themselves around in a way that can only be described as madness. They routinely pull 8-9 G’s (gravitational force) and move like none other. They may not make the most noise and scare the elderly, but, they sure do put on a show. Kudos to those pilots for doing what they do.

After that, the Marine Ground Task Force Demo Rolls in and is easily the largest aircraft (and ground assault team) demo of the day. This is an event that involves all aspects of the US Marines. From tanks and helicopters to the aircraft providing cover from overhead, this thing is just awesome. The level of coordination between all the moving parts must have taken quite a bit of time to put together, and it shows. Once again, the entire flightline has its eyes gazing to the skies for any and all aircraft that come by. There is just so much going on at that moment, that it’s overwhelming. I was giggling like a school girl seeing wave after wave of Hornets, Harriers and Cobras fly by. Tanks and ground troops fire every which way and bombs are exploding all around. It’s like watching a movie in front of my very eyes. 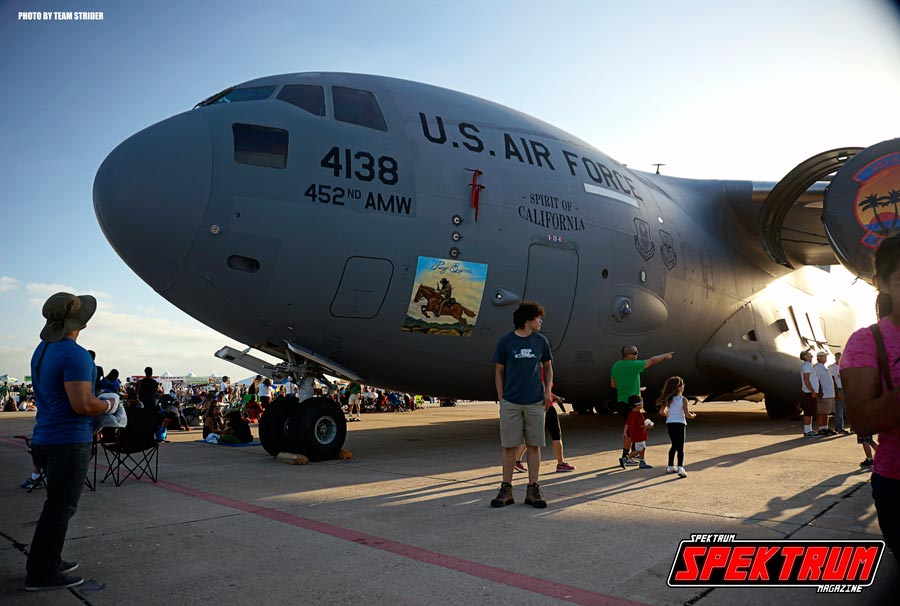 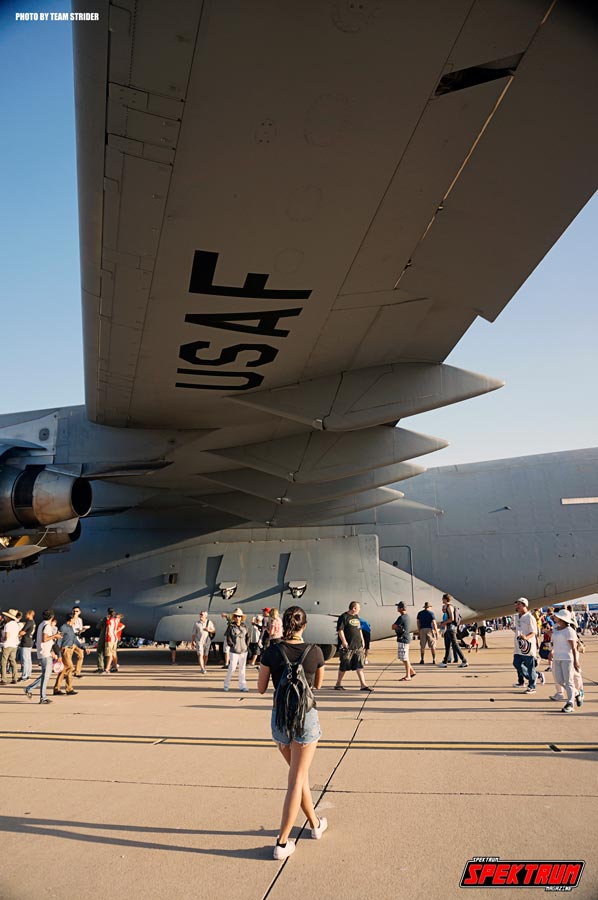 The days at the Miramar flow very smoothly and one action item after another is put in motion as the other is ending. When one aircraft has completed their demo, the next comes right on scene and is ready to entertain. It’s pretty impressive, and that alone would be worth the trip. But, all over the ramp (the flightline), there are static displays of those very craft flying around. Unlike a car show for example, you can step inside some of these multi-million dollar vehicles and see what it’s like to sit in one. When I was a kid, that was one of the most exciting parts, and walking around seeing kids feel the same is great. That is one of the main reasons to go to an air show. If you’ve never been to one, just being to the Miramar Air Show once will make you want to come back. It’s an experience that you have to be there for. There is no substitute for such a show, and seeing it any other way just wouldn’t be the same.  Believe me, after seeing the walls of flame and jetcar, you’ll go insane wondering why you hadn’t been there before. The jet car is impressive especially during the twilight show, and the plume of flames and spent fuel is enough to make a grown man cry. One more reason to go to this show. 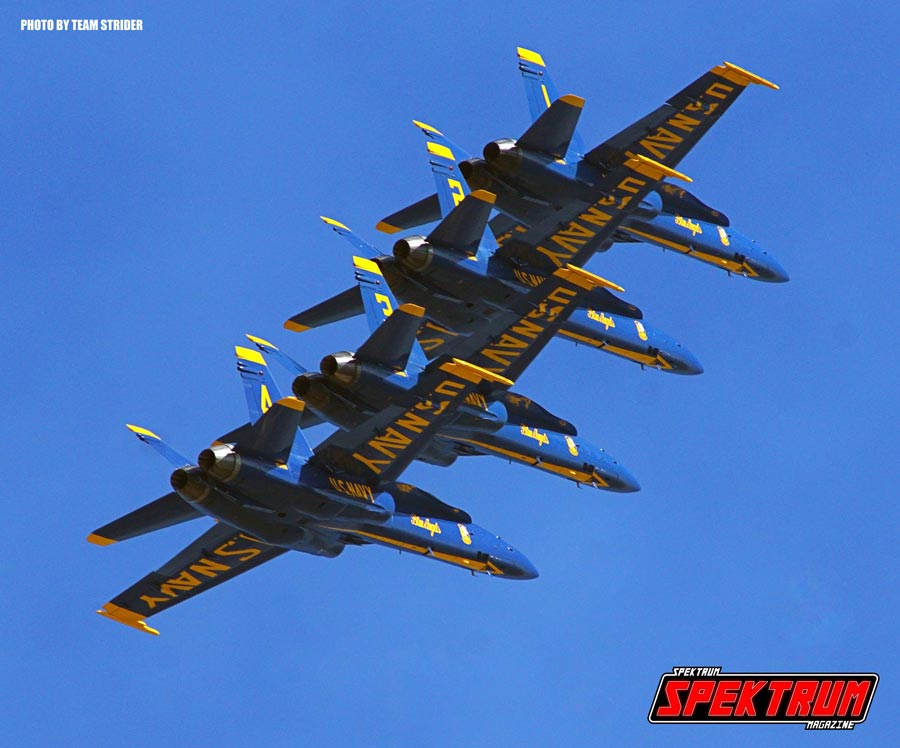 The Blue Angels at the finale

This last show brought back a wave of memories (as it does ever year) for myself, and I couldn’t be any happier writing this today. This show and the one that used to be at El Toro were ones I used to share with my dad, and they were shows that have grown on me even more as the years have passed by. It is nice to have walked down memory lane, and to see that being experienced by others all over. It helps that Miramar is one of the largest shows on the west coast and it brings crowds from all over the world. I know I say this every time, but, once again, I cannot wait for this next show to come around. I am sure it will be just as big as the last and perhaps, even better. Fighter Town USA, here I come! 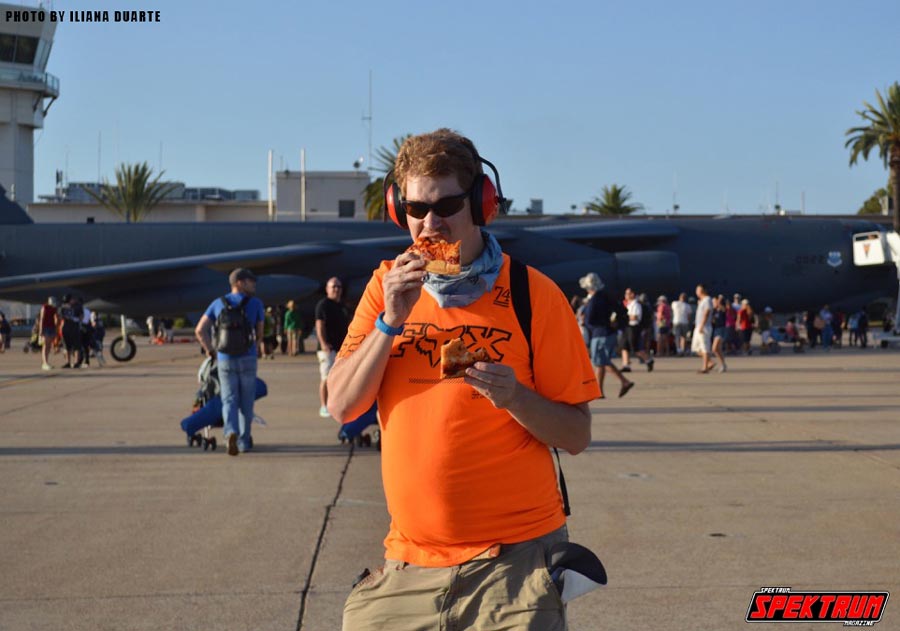 One really happy eater from Miramar 🙂 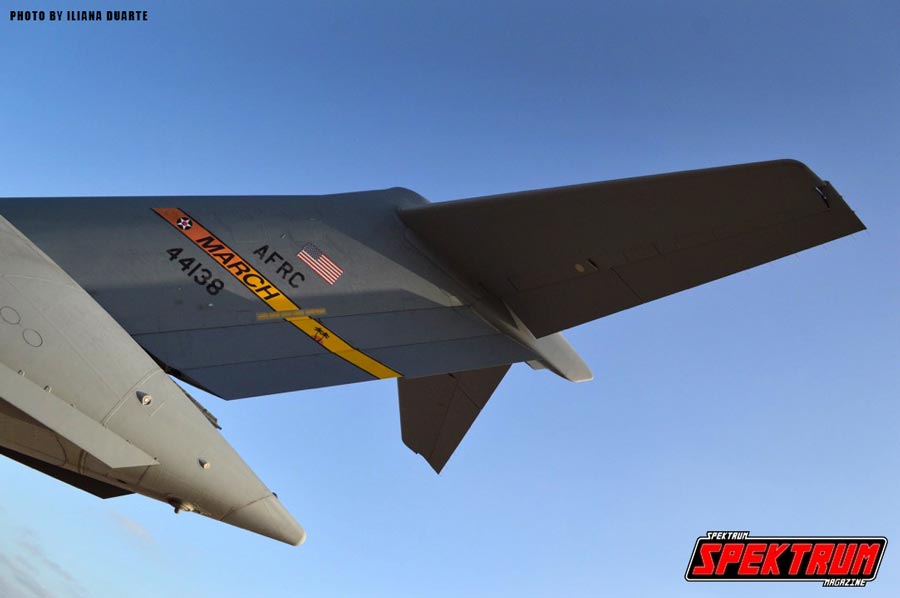 Tail of the C-17. This one is from March Air Reserve Base

The Super Hornet at rest 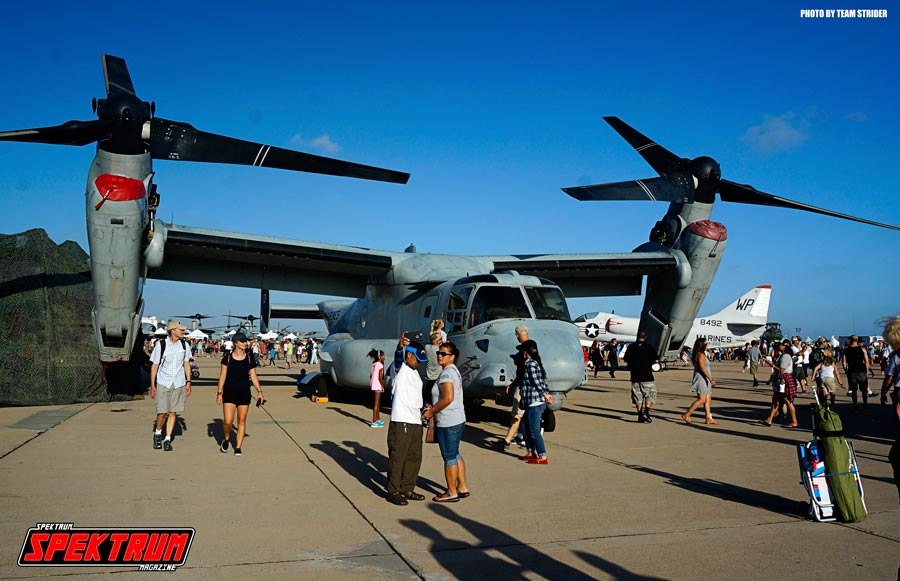 The new V-22 Osprey with its rotor blades open 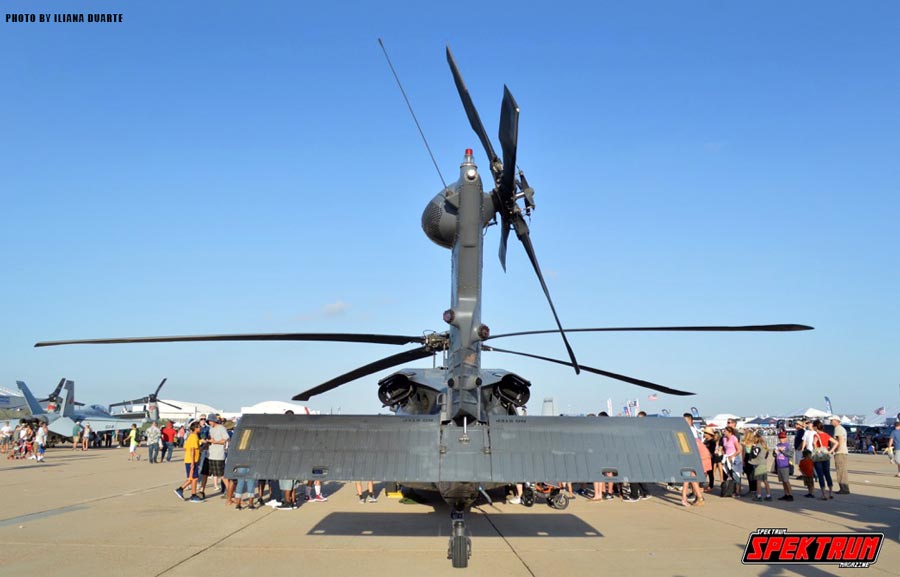 Blackhawk Helicopter from the rear 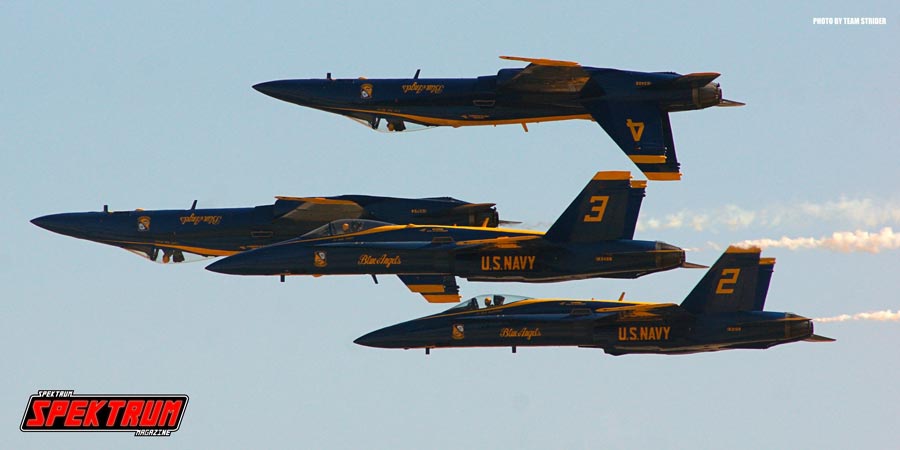 The Blue Angels tearing up the air space

Brand new AH-1Z for the Marines

For more information on The Miramar Air Show, check out their website at http://www.miramarairshow.com

The Beast Unleashed: Altered Beast for the SEGA Genesis 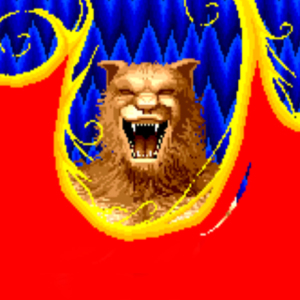 The Beast Unleashed: Altered Beast for the SEGA Genesis

Video games are a medium that promote imagination. From the very beginning video games had to be played with a little...