Introduction to the Dragon’s Den by way of The Division 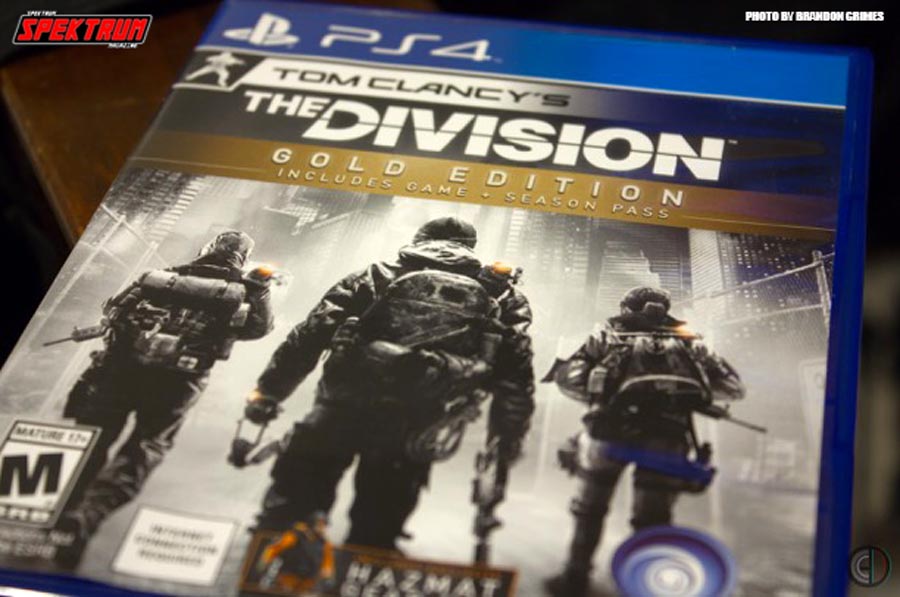 Hi there everyone. My name is Brandon Grimes, but you can call me Gee” and just know that I am here to talk about all things gaming and to do so in my own unique way. But, with this being my first article, I just wanted to thank Spektrum Magazine for being the ones bold enough to grant me a platform to voice my opinions. Now that all the heavy stuff and introductions are out of the way let’s get to what I came here for.

Since this is my first article, I wanted to start off with a bang and give you guys some of my first impressions of “Tom Clancy’s The Division” for the Playstation 4. I actually went ahead and pre-ordered the gold edition of the game because the deal I got through Amazon was so good that I couldn’t resist. One other reason is that I had never bought a season pass before, so I thought what the heck. I at least would want one game where I can keep up with everyone and not be depressed while I watched everyone play the new game areas (in the gold edition people will be able to play new areas not seen in the season pass editions).

Starting the game was great. Just watching that loading screen boot up for the first time set the mood for me. Those first thirty seconds of the opening video had me thinking I was playing Metal Gear Solid 4. Just realizing that it was an epidemic that made New York fall apart had me saying, “Again!?” Finding out that I was a sleeper agent was one of the coolest concepts of a story I heard, except for the fact as to what I was doing before NY got this far into this crap. 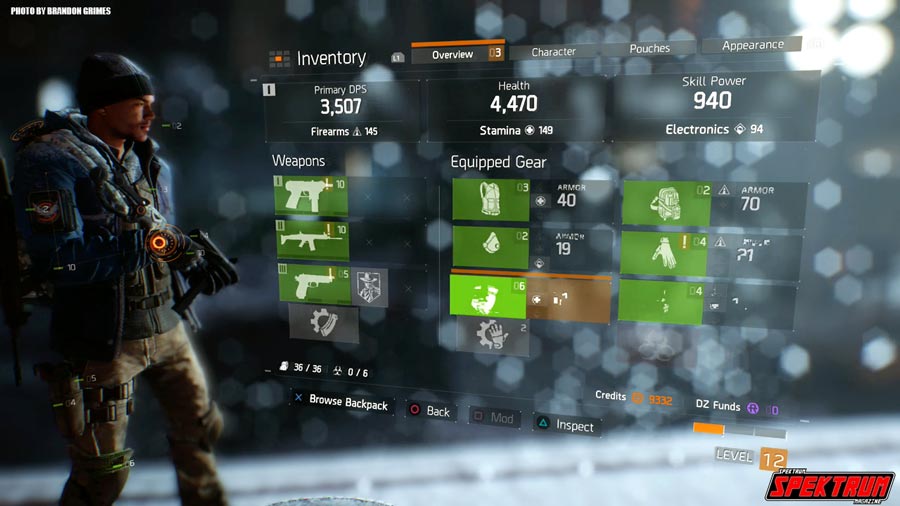 Your Character Inventory Screen for The Division

So, right at the beginning the story didn’t impress me much, but I also didn’t expect a great overarching narrative out of this either. Who knows, I could be surprised, but I had only just started the game. So, we’ll see how it goes as I get further into the thick of it. Even though the story was a little lackluster to me, it was the gameplay that I had all my hopes for. Now, I missed out on the beta completely, so all I can go off of is the trailers that I had seen. From the trailers, the game had me hyped and now, having it in my system all I can say is, “Finally!”.

From that opening moment of seeing my character get up and go look at a window to see a reflection of himself, I thought that I had finally got the co-op game I had dreamed of for the most part at least. That was, until I actually had to create my character. In the game, there is an option for creating your own player. That create-a-character option is something I expected so much more from. It’s very light on the creative options to create your character. It’s a bit disappointing, but, perhaps it is something that can be addressed in updates or later versions.

In the thick of it. Gameplay from The Division

Getting more in depth into the gameplay, one will notice a strange occurrence when shooting at enemies. The enemies can take quite a bit of damage, and tend to like sponges, soaking up bullets and damage like it’s nobody’s business. I understand that you can level up your character to do more damage but why is it so hard to kill one guy, even with head shots? Speaking of head shots, why is it every time I get shot it feels like a headshot? The damage models and balance will definitely need a bit of tweaking to feel right. Maybe that will change as I get further into the game, but, as of right now that’s pretty annoying. The last thing I noticed while playing The Division, is it can get pretty repetitive when running around New York and finding random enemies on the map. Maybe a little more variety would be a welcome addition in the future.

But, just because I’ve been bashing on this game, doesn’t mean that I think it’s a bad game. The missions you take on can actually be pretty fun and bring some welcome variation to the gameplay. Some of the best moments I had playing the game was with others. Being able to take on a mission in which we’re being rained on with bullets and actually be able to survive is always an exciting prospect.

Crouching behind cover during a firefight

I haven’t beaten this game yet. Heck, I’m not even that far into it, but from what I’ve played so far, it’s a good game with its some issues. I still need to check out a feature in the game called the Dark Zone. The Dark Zone is a player-vs.-player area where agents can find some of the best items in the game. I’m trying to wait until I feel confident enough to take on that challenge though. I feel as though I would need a bit more experience to take that on. I also need to do a bit of backtracking and complete some of the game’s missions I haven’t yet completed. To be honest I still haven’t unlocked my entire Main Base yet.

I definitely have a lot more to do before I’m finished with the game, but hopefully I get a chance to come back to it and give you my final impressions.

Back of the game case for The Division 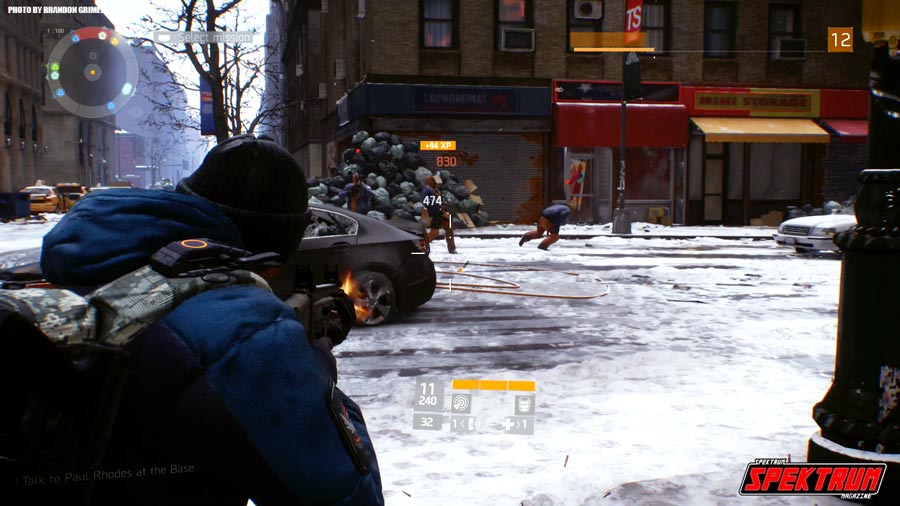 Hitting the enemy where it hurts 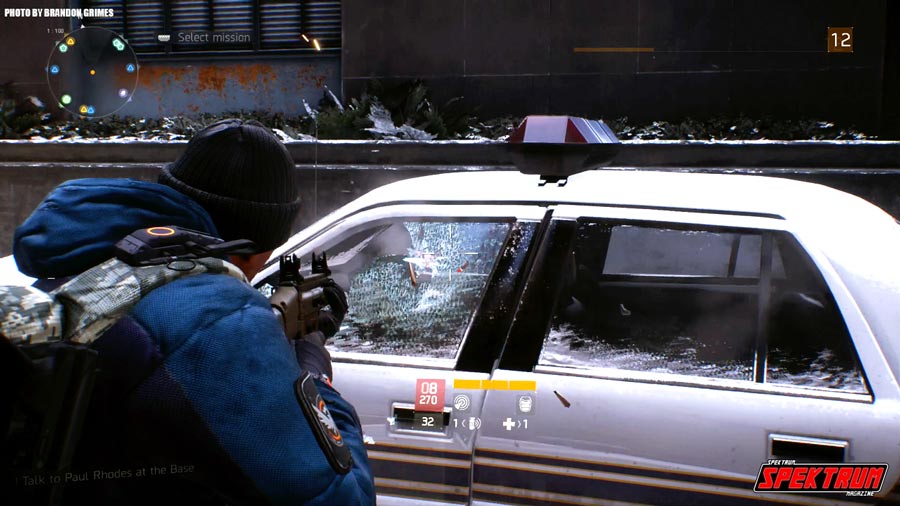 Words and Photos By Brandon Grimes

Copyright Disclaimer under section 107 of the Copyright Act 1976, allowance is made for “fair use” for purposes such as criticism, comment, news reporting, teaching, scholarship, education and research.

Fair use is a use permitted by copyright statute that might otherwise be infringing.

Non-profit, educational or personal use tips the balance in favor of fair use.

This article was prepared or accomplished by Brandon Grimes in his personal capacity. The opinions expressed in this article are the author’s own and do not necessarily reflect the views of Spektrum Magazine, or its affiliates. 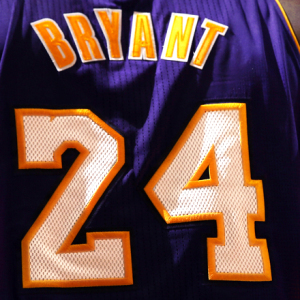 Sometimes in life things happen that you can't explain. There could be things that you see, or even experience that could...